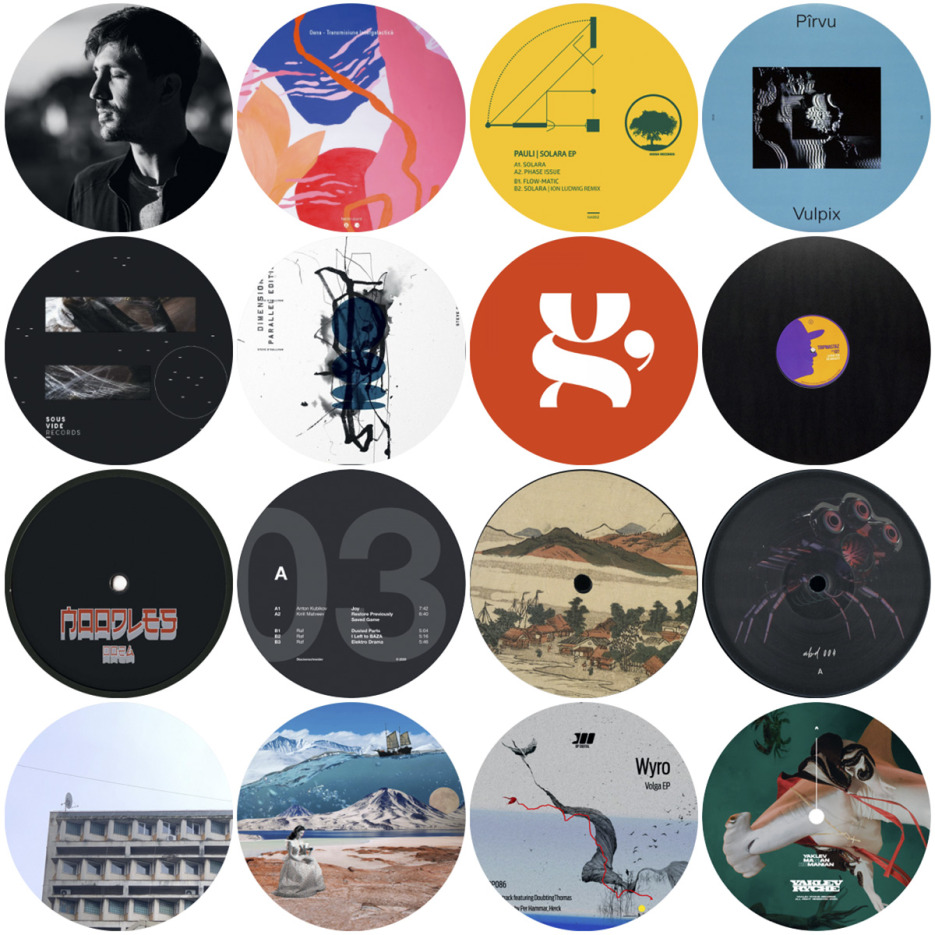 Probably more than ever, music plays a significant role in our lives. Being under many restrictions and lockdowns, music is the predominant activity and a good way to connect with friends and people with the same values, even at distances.

Since the beginning of the year, we heard many fantastic productions that caught our imagination and gave us good vibes and motivated us to write reviews and premiere some of the tracks, documenting this intriguing underground but yet global phenomenon that we all refer to as ROminimal or micROhouse.

“Alci is joining the Nervmusic family by bringing this 7 pieces of space love on board of our Enterprise”. – info sheet from the distributor

“Dubøka Records are pleased to announce their first vinyl-only release dedicated to their home town Birmingham, UK. This 3 track EP titled ‘Digbeth’ encapsulates the unmistakable production style from BRYZ. Each unique track is curated with that pure Romanian sound.” – info sheet from the distributor

“A fabulous overview into Meanders momentum.” – info sheet from the distributor

The next chapter to arrive on vinyl in early January 2021 from Priku‘s Atipic Lab venture sees local artist Cosmjn returning to the label with two driving cuts, designed with sublime old-school elements which explore inner and outer dimensions with a forward-thinking approach to the minimal genre.

“In a world full of minimal techno be dot13, a name that revitalized the local Romanian musical establishment with his productions. He landed, as did his music, with a lot of noise. A pleasant noise. The name of EP, Horns of a Dilemma, like a metaphor for the mix of present musical genres, places our fourth release somewhere on the border between breakbeat, electro, minimal and tech-house.” – info sheet from the distributor

“Amphia welcomes Ferro, making his debut with a four-tracker EP titled The Unforced”. – info sheet from the distributor

“The ever cultured Ion Ludwig is next up on the esteemed Unreleased Ltd label with a new three-tracker that once again shows off his intricate studio skills. Ludwig has long been turning out killer tunes on labels like UGold and Sushitech, and he does it again here.” – info sheet from the distributor

“BERG AUDIO welcomes Lola Palmer with her debut EP on the label, entitled “Somewhere New”. Known for her impeccable selections that she has been sharing during the past two decades, Lola Palmer delivers two superb deep techno tools, incl. Janeret & Priku feat. Dinu remixes. Artwork by Juli Jah.” – info sheet from the distributor

After publishing three amazing minimal records signed by Chrivu, Maifaunu and Sonohat on his freshly founded record label Midas Touch, local DJ and producer Macarie drops “Four Out Of 4 LP” on vinyl-only side venture MDT LTD, unleashing a solid underground narrative that extends to 8 fresh tracks, with half of them going for the classic 4/4 rhythm backed-up by solid basslines and twisted textures and the other half settling for an unconventional electro/breakbeat approach. A highly recommended record right here for collectors, selectors and enthusiasts alike!

Mihai Pol announced his latest album, titled Pandora 04, the fourth LP of its series, which is independently released on Bandcamp by the artist.

Pandora 04 contains four well-tailored tracks, composed with deep and uplifting lines, twisting basslines, driving percussive patterns and unusual inserts. The LP is a dance lesson, but at the same time, the journey has a hidden and mysterious story underneath.

Oana delivers the third vinyl-only instalment to arrive from the Romanian record label feeder sound. Oana is well-known for her vibrant selections and productions, as well as for running Ariki Records. Titled “Transmisiune Intergalactică”, the 12’’ packs three solid minimalistic tracks designed with deep and futuristic rhythms and textures, ready to take you on a journey into inner and outer space!

Canadian imprint Aissa Records returns with its second pressing, this time with Hungarian artist Pauli at the controls alongside Ion Ludwig on remix duties. Titled “Solara EP”, the material provides three uplifting house-infused originals and a deeper re-interpretation of the title track that will surely delight electronic music enthusiasts, collectors and selectors worldwide. The artwork is made by MID Studio while the mastering is signed by Pheek.

“Club Guesthouse reveals the first release of their record label coming from Pîrvu, one of GH’s residents and a sound design wizard with a remarkable ear for detail, including a special remix Rhadoo.
The 12-inches sports ‘Vulpix.ro’ on the A-side, a track that immediately stands out, challenging our perceptions of harmony and structure for the better. ‘In fat ca petele’ illustrates an elusive atmosphere, deepening surface and depth into a fresh electronic dialect of modern mirage. Rhadoo is rearranging molecules in the air on the flip-side, delivering a minimalist remix. The vocals seek out some darkened hues, with certain attention to the low end, giving the subs a proper workout – making it another vital dispatch from the Romanian pioneer.” – info sheet from the distributor

For this release, Eastenderz invited Priku to collaborate with Dinu for a two-track EP. Combining their astonishing skills in a complex array of sound derived from electronic music and classical instruments, the two tracks forming the EP are in contrast with each other.

“Rising Romanian producer RQZ is back on Sous-Vide Records following his previous remix of “First Floor” from SVR001. This time the Mioritmic resident presents four snappy minimal offerings.” – info sheet from the distributor

“Traumer returns on his imprint.” – info sheet from the distributor

“BodyParts Vinyl welcomes the Russian sound wizard Tripmastaz with his Ulybok Tebe Ded Makar EP. The package contains 3 fresh tunes with a minimalistic but housy touch and a remix by Romanian stalwart Vlad Caia.
The EP is mastered at Tripmastering, the analog mixing and mastering studio the all-rounder opened back in 2020.” – info sheet from the distributor

Russian imprint Stackenschneider reveals its third Various Artists compilation with Anton Kubikov, Kirill Matveev and Raf being the ones behind the production this time. STK03 features 5 tracks that incorporate various influences from minimal, breaks and electro, elegantly crafted by the artists into a thrilling narrative that stands as a reminder for those beautiful moments spent behind the decks at the notorious nightclub located in the central area of St. Petersburg.

Italian label Ukiyo Music returns with a Various Artists compilation dedicated to the minimal genre with Emi, Estmode and Pandilla Ltd feat. Akal Anand Kaur being the ones in charge of the production for Retro Series Vol. 1. The 12” packs three solid cuts and arrives in a limited number of 200 copies in 180 gr. vinyl with no repress.

“Released March 25, 2021. Mastered by .e. Photo by visullucid” – info sheet from the distributor

“BP Digital opens 2021 with the Russian producer Wyro, talent within the minimal house and deep tech sphere.
Volga EP shows how the addictive rolling groove with a pinch of dirtiness effortlessly meets sneaking basslines.
Beside the title track, Wyro teams up with DoubtingThomas and Katsuba to deliver the two other rollers to the release.
The EP is complimented with the Dubb remix by Per Hammar and minimalistic after-hours vision from Herck.” – info sheet from the distributor

Let us know what are your favourite releases this year, and what do you think we should add to this list.