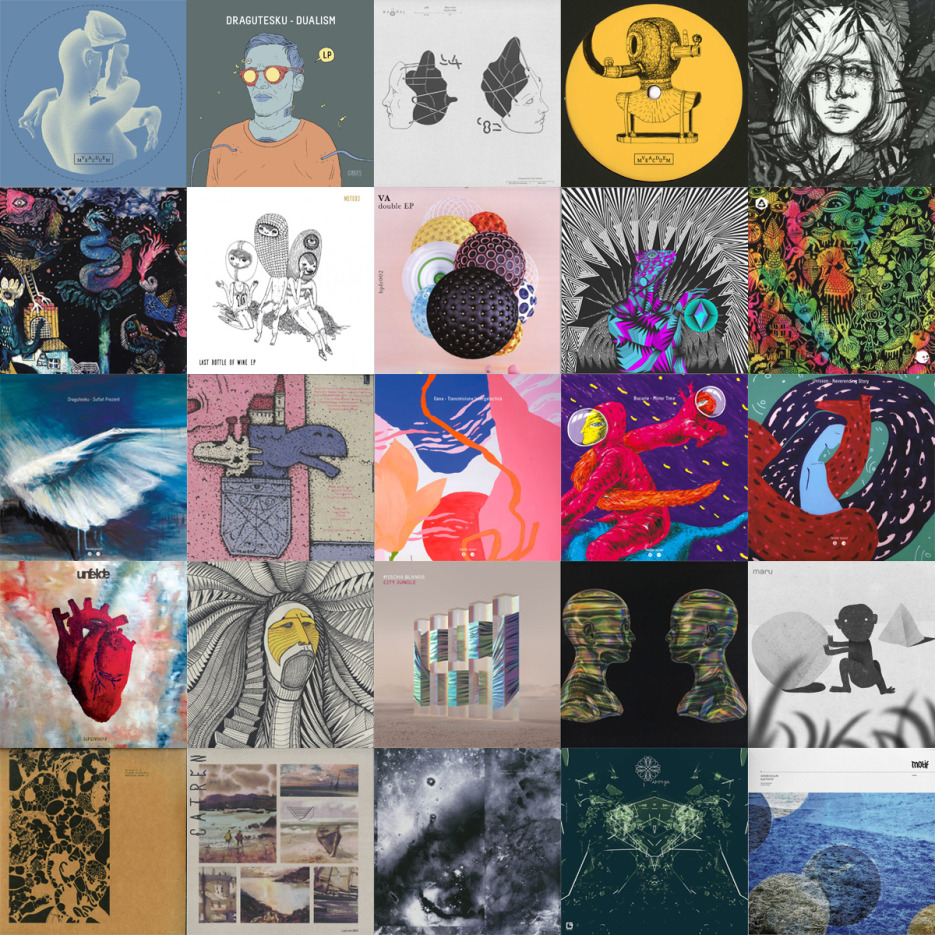 Electronic music arrives in various formats and packaging yet it’s always backed up by the artwork whether we talk about minimalistic yet expressive designs or complex and intriguing illustrations. Today we explore the world of vinyl covers designed by Romanian artists.

The Romanian graphic design community is large, diverse, interconnected and always evolving. From street art to print, painting and digital compositions, you can always find something new, inspiring and mind-bending coming from very talented artists across the country. From time to time some of those creations end up being used as visual references by record labels, music producers and DJs representing all genres and styles. Here we’ll focus on those that were made in balance with the aesthetics of minimal techno, microhouse and closely related sounds.

As vinyl is our favourite format in which we listen to electronic music, today we dive deep into the world of vinyl artwork in order to discover more about the artists behind the designs for some memorable record packages brought forward through labels like [a:rpia:r], Arc Records, Amphia, BPLR Records, Catren, InFiné, Kiria Records, Kontent, Lokomotiv, Longcut Records, Midas Touch, Motif, Naural, Stamp Records, Unfelde Records, Vade Mecum and our own feeder sound, among others.

A passionate visual artist based in Brașov, Anita Frâncu works mainly on canvas, often mixing different techniques and mediums. Her inner turmoil has a major impact on her artistic approach while one of her main desires is to participate in the evolution of crypto art and to add value to this field. Finding herself in the transition between traditional and digital art, Anita signs the painting behind our first vinyl-only release, “Suflet Prezent” by Dragutesku.

Hailing from Bucharest, Bogdan Ceaușescu and Sebastian Pren have often worked together on projects related to designing vinyl covers for artists such as LA-based producers Matthew Sommers and Adam Fuller as well as Romanian jazz-fusion band Krisper, which also enjoyed a digital version. Having extended experience under their belts, both artists explore graphic design focusing on poster design, visual identity, typography and illustration.

A graphic designer with a deep passion for print, packaging, photography, electronic music and that sweet mix of both traditional and digital environments, Claudiu Ștefan created several artworks for well-known record labels like Amphia, Algorithmic, Vade Mecum, Anakronik, Motif, Naural and Afterhours as well as for Dan Andrei‘s independent releases on Bandcamp.

A digital artist with a focus on exploring immersive 3D characters and environments, Dragoș Dincă has been present in the virtual world for more than 12 years, constantly showcasing his unique vision that sometimes seems to come “from another space“. His artworks can be found on record sleeves from Catren, BPLR Records, Kiria Records and Rawax.

On many occasions, Bucharest-based VJ and multimedia artist Silviu Vișan aka Dreamrec would team up with his graphic designer friend Florin Iscru in order to work on various inspiring projects including the packaging for [a:rpia:r]‘s vinyl releases. Having close ties to the electronic music industry since the late ’90s, both artists are well-known in this field and have been part of Videogram design studio alongside Cote.

A mysterious yet very talented person, Emilian Jamschek is the one behind the twisted characters featured on the front sleeves of Kontent‘s vinyl-only releases. With Vlad Arapasu heading the musical direction, expect some serious minimal techno and microhouse beats, so far delivered by Macarie, Leanca, Chrivu, Hippex, Kivva and Sonohat.

Lucian Niță aka KSELEQOQYNQYSHY (Houses With Closed Eyes) is a visual narrator who uses his intuition as the primary source of inspiration in his art. His passion for illustration and mural painting is well connected with the local street art movement, as the walls of the city can easily become a canvas for him at any given time. Blending otherworldly architectural patterns with fantastic creatures and mysterious details, his distinct vision creates artworks that can truly speak for themselves.

A part of his first “Un-hidden” mural painting at The Faculty of Sociology and Social Work in Bucharest was captured in the artwork for FSRO002 “Similar Feelings“, our second vinyl-only release signed by Piktor, while back in 2019 he joined Ada Kaleh in our feeder sound LIVE series, delivering yet another inspiring visual experience on a large 2×1.5m canvas.

Expressing herself through various styles, techniques and mediums, Livi Po brings forward a colourful world made up of motivational messages, personal wishes, observations about everyday life and people, sketched thoughts and wordplay, all mixed up with various themes and backgrounds that fit the mood. Aside from her numerous explorations in the world of lettering, calligraphy, illustration and murals, she also signs the artwork for FSRO003 “Transmisiune Intergalactică” by Oana.

Currently living and working in Bucharest, Livia Fălcaru is an illustrator and visual artist influenced by her personal experiences as a woman living in these times. Although her artworks generally reveal cheerful colours, the characters usually portray deep and raw emotions based on reality, ultimately serving as a medium for real and honest communication. She describes her work process as being very spontaneous, combining both traditional and digital techniques. Since 2017 Livia remains behind the creative path of the Australian artist collective, record label, podcast and event series Lokomotiv.

A multidisciplinary graphic artist that always feels happy to dive deep into anything from illustration, concept art, 2D animation, linocut, poster design, visual identity and mural paintings, Maria Bălan has constantly developed her distinct style throughout time. Carefully crafted during our first LIVE transmission featuring Teluric at the controls, her painting depicting an escape plan from the city pollution stands as the cover artwork for our 4th pressing “Mirror Time” by Bucurie.

Her most recent art installation included in the “Un-hidden Romania” programme can be found outside the Faculty of Sociology and Social Work in Bucharest. By scanning the QR code inserted in the drawing viewers can experience the immersive soundtrack associated with this piece, composed by Adrian Drăguț aka Dragutesku.

Specialised in 3D imagery and animation, Matei Băcanu studies possible shapes, environments and movements that merge into hypnotic textural compositions. His “mechanisms” have been featured as the main visual elements for Mischa Blanos‘ “City Jungle” LP released in a limited number of vinyl copies via Longcut Records in collaboration with InFiné. The artworks for the artist’s digital releases “Steppe” EP and “The Bald Soprano” OST are also included in his portfolio.

The minimalistic drawings of Raul Ciceu always have a deeper meaning, revealing simple yet emotive and meaningful messages hidden in plain sight. Currently working as an Art Director in Bucharest, he always finds time to let his imagination run wild and constantly plays with anything from watercolour on paper to print and digital illustration. Every piece has its own journey and his artworks for the Australian record label Maru or the French outlet Stamp Records sure stand out.

A constant presence on the international underground electronic music scene for more than a decade now, Brașov-based Robert David stands out with his distinct take on minimal techno, microhouse, deep house or dub techno, always delivering top-quality productions and DJ sets to the people. His music can be found on his own playground Unfelde Records and labels like Yoyaku, Minim.all, Whoyostro, Capodopere, Soundterrasse, Aku, Melotherapy, Wavetech Limited and Splitools, among others. Aside from his passion for music, he also loves to paint colourful, abstract compositions in his free time, rendered in digital mediums or with acrylic on canvas.

When imagination gets mixed with dystopian punk themes, intriguing doodling and a strong passion for drawing and painting in any kind of medium, Robert Obert has definitely settled on his own style, carefully portraying characters that smoothly merge with twisted and futuristic background elements. Starting with meticulous drawings in sketchbooks, his process of thinking manifests in street art interventions such as murals, handpainted panels or sculptures, as well as in digital and print mediums through illustrations, stickers, posters and comic books. Robert‘s distinct graphic style can easily be recognised in the artwork for Dragutesku‘s “Dualism” LP, released via the artist’s own DRG Series in a limited 2×12″ package.

From random sketches to insightful drawings and colourful murals, SANDi has been more and more present in the local street art movement lately, showcasing her skills through collaborations with projects like Un-hidden Romania, Amural, SISAF and Street Delivery. Alongside Irina Mocanu she’s part of Graffete street art girls crew in Bucharest, focused on deeply exploring urban art and beyond. The online vernissage of the Street Art Bucharest exhibition brought her and Unisson together for a memorable LIVE session, resulting in her painting becoming the artwork for the duo’s “Neverending Story” EP, our latest vinyl-only release that you can still find in a limited number of copies at selected record stores around the world.

📣 We invite local music producers to participate in our latest feeder sound Open Call happening between the 21st of September and the 26th of October.

📦 Speaking about vinyl, if you are a record collector or selector, here’s a list of record stores that you should definitely visit in order to add the latest releases to your bag.