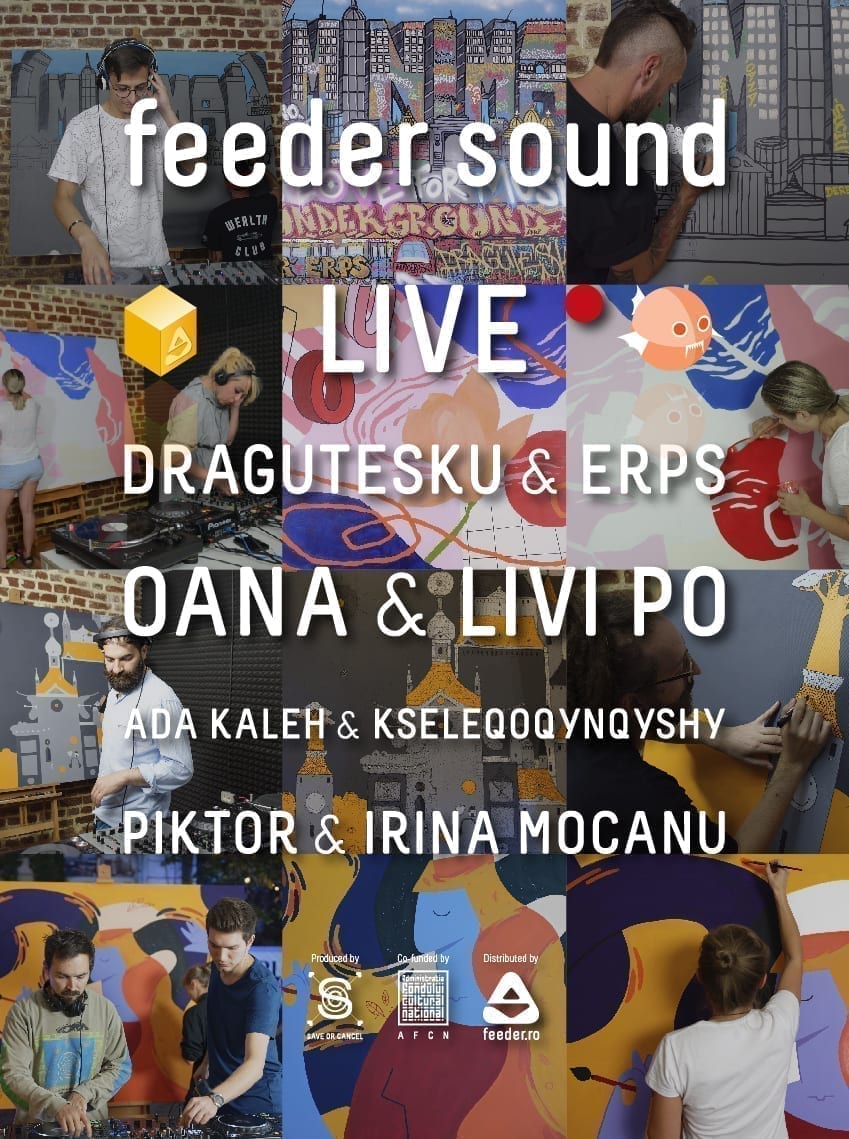 Let’s dive in deeper into sound and art, carefully crafted to inspire and challenge new perspectives!

As you already know by now, feeder sound is a showcase of local and international artists which brings forward amazing DJ sets and fresh tunes meticulously curated in a distinct collection which promotes mutual recognition and cultural exchange between musicians worldwide. The project aims to create new artistic expression opportunities for emerging and renowned artists alike, such as the feeder sound OPEN CALL for DJs and producers which took place between 17 July and 17 August, with 55 podcasts and 72 tracks sent to our platform. Check out the results here.

2019 sees the project expand on a multidisciplinary dimension, adding a visual component to the music by inviting talented artists to combine their skills in order to create a new and completely different experience. Blending live painting with engaging selections, the feeder sound LIVE stream event series welcomed four DJs Dragutesku, Oana, Ada Kaleh and Piktor to perform alongside four visual artists ERPS, Livi Po, Kseleqoqynqyshy and Irina Mocanu. This venture adds even more flavour to the artistic dimensions we’re exploring, which includes the EP/LP Reviews and exclusive premieres sections, aside from the well-known podcast series that counts 235 recordings until now.

The concept was split into four chapters happening once a month between Wednesday 24th of July and Saturday 19th of October. It’s time to look deeper into the story and reveal the outcome!

For the first episode, you can hear Dragutesku mixing his music with other artists’ productions, while ERPS paints a big canvas describing Bucharest’s emotional map of electronic music DJs and producers.

Dragutesku is the protagonist of our first vinyl-only release, “Suflet Prezent“, launched in January 2019 and sold out in less than two months, as well as the one behind the infamous DRG Series. His discography also includes collaborations with Fapte, Tupiar, Otomoji, Masivarium, Perception Dub, Modeight, Parama and Unic. For this session, he goes for a solid minimal selection infused with stripped-down rhythms and peculiar sounds, having deeper and spacious moments incorporated with mathematical precision from time to time. Flowing at a steady pace, the mix reveals intricate arrangements focused on glitched cuts, bleeps and pops that reverberate with dazzling energy. 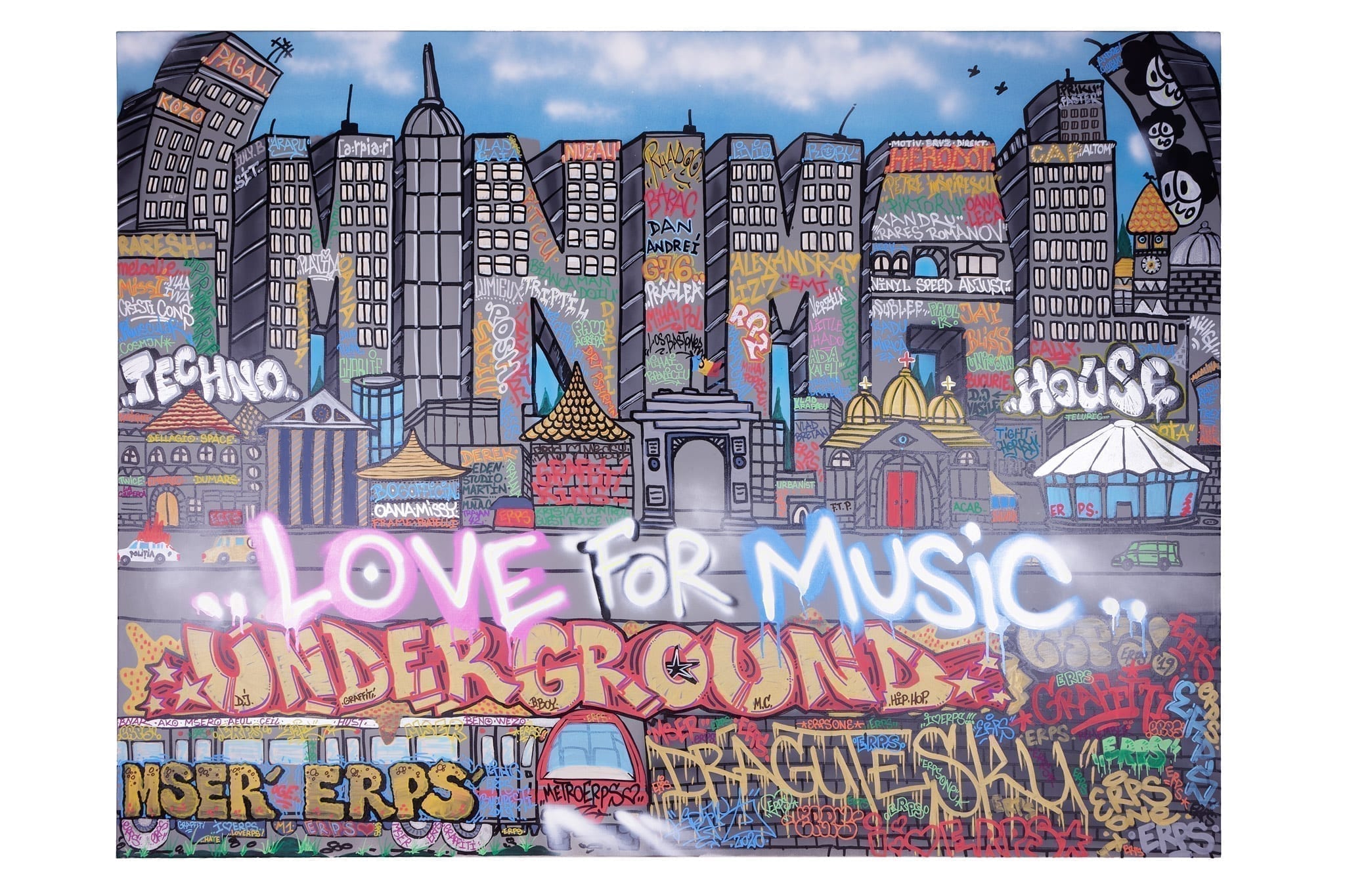 The second episode features Oana, the one behind Ariki Records and Livi Po, a young visual artist passionate about lettering, calligraphy and street art, exploring both traditional and digital techniques while letting her imagination run free every time she works.

With activity spanning for more than 10 years, Oana has been travelling across Europe performing at numerous events and festivals while publishing some of her works with imprints like Deep Square Berlin, Natural Rhythm, Ensis Black and Dinsubsol Records. Here, he unleashes her creativity as a selector taking us on an engaging journey designed with various shades of deep and raw techno, microhouse, as well as some rare and hidden gems. The set slowly builds momentum, going from minimalistic sounds to driving rhythms and back to more laid-back and dubby vibes. The ending provides a very special track signed by H2Opt aka Folclorescent titled “Lupii si Zeii”, a downtempo composition that teaches us that the only way to reach for the gods is through the power of love. 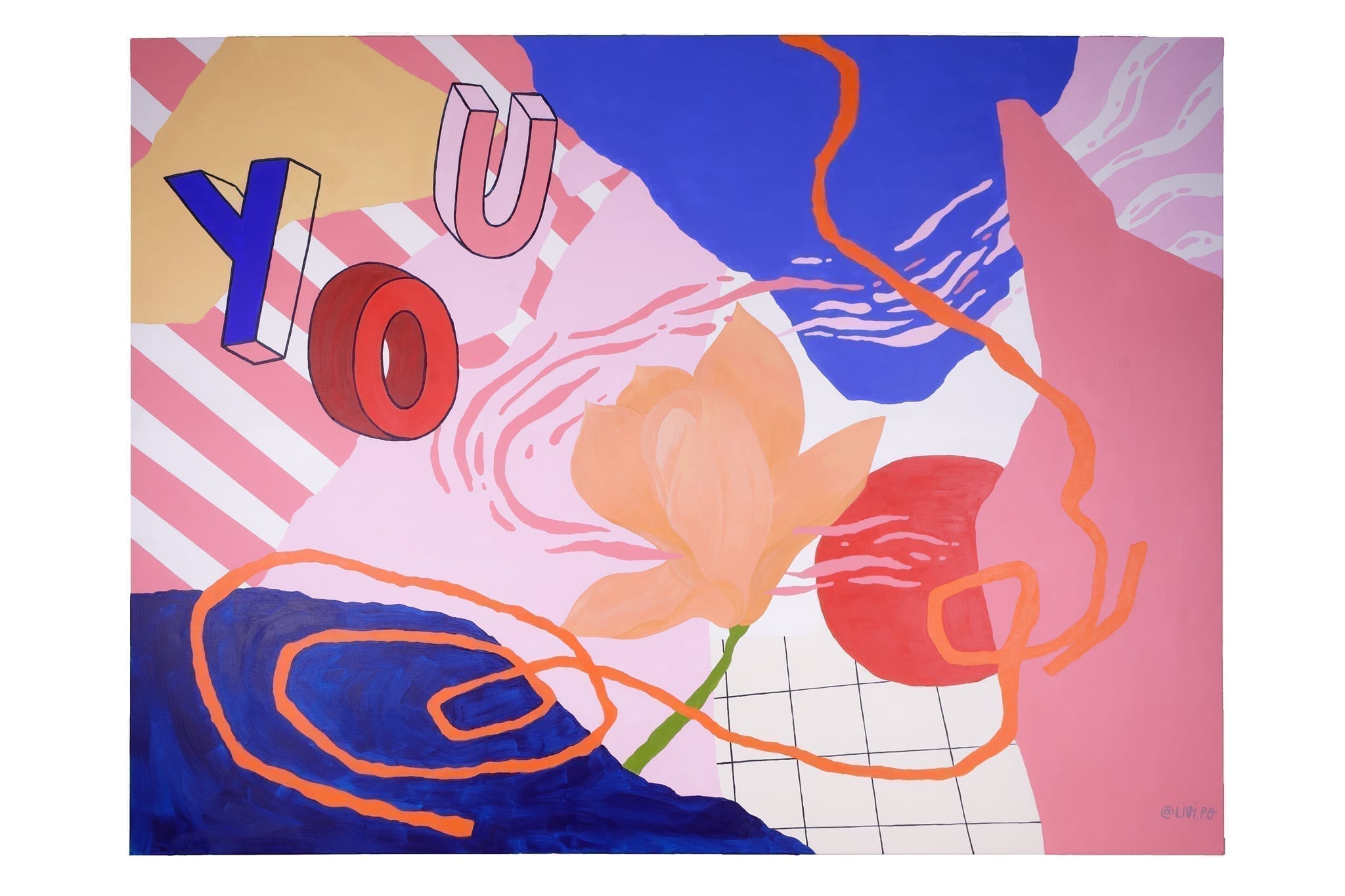 Livi Po explores the connection between humans and nature through vivid colours, textures and patterns that subtly represent the elements. Titled “YOU FLOWER”, her work makes us think about the elegant order of things and how the layers of our reality are linked in harmony. Just like a flower is grounded into the earth and needs the Sun to exist, so are we, a fragile expression of something that is beyond words.

The third chapter sees Ada Kaleh sharing some delightful vibes alongside Kseleqoqynqyshy, a visual narrator with a unique style, living and working in Bucharest.

Owner of the eponymous record label, Ada Kaleh is a respected presence on the international electronic music scene, with works published by The Rabit Hole, Third Wave Black, Uvar, R&S Records and Rawax. His distinct approach to music-making involves detuning his music from the standard 440Hz to 432Hz, thus giving a warmer feeling to the sounds and adding an eerie dimension to the rhythms. His selection for this very special event brings forward elegant transitions between deep and groovy house, old school and new tracks alike, acidic and breakbeat-infused compositions, techy and dub-flavoured cuts and a pinch of minimal. A warm and relaxed mood can be felt throughout the whole trip, which extends for two hypnotising hours. 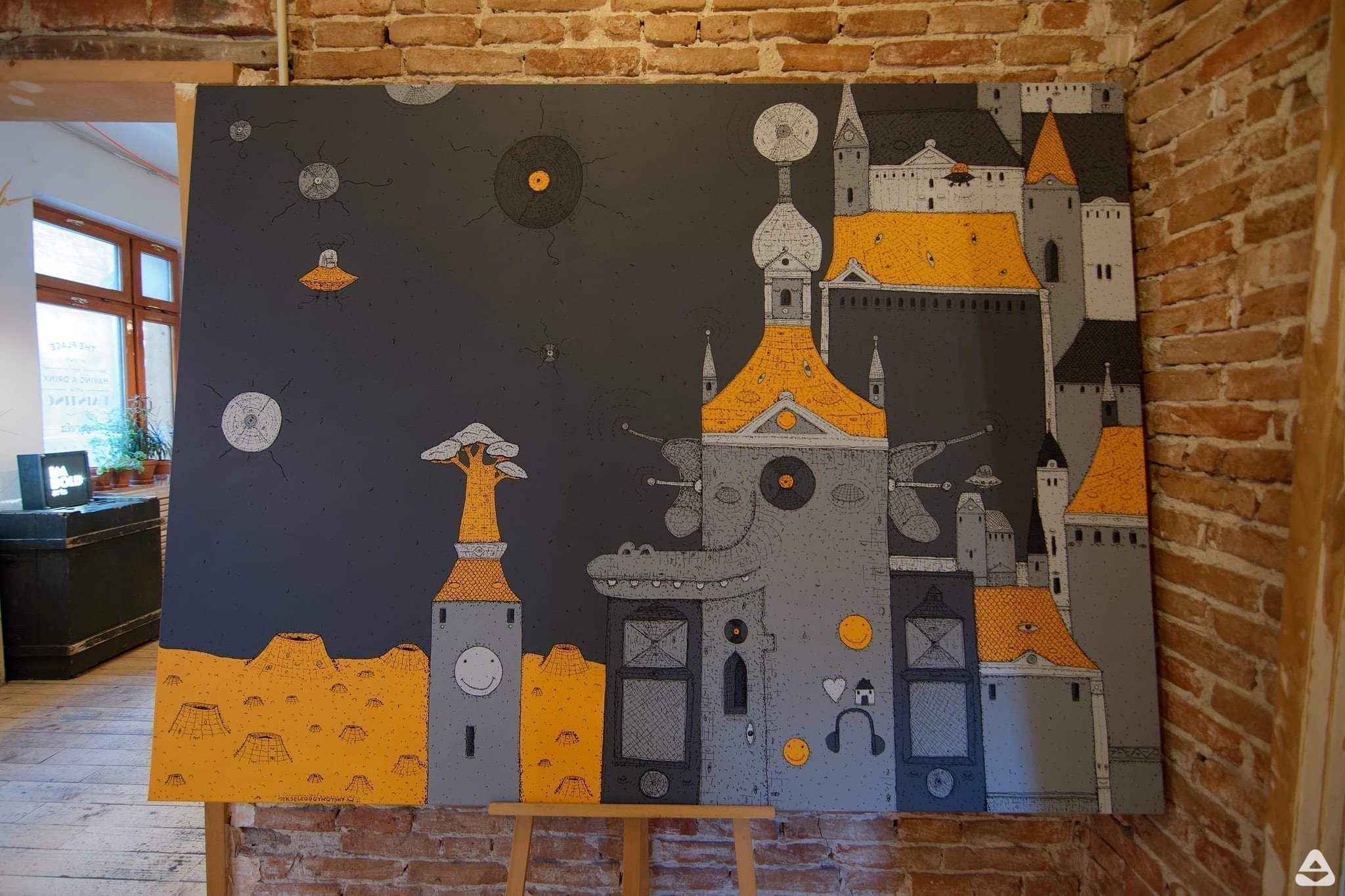 In his painting, Kseleqoqynqyshy displays an out-of-this-world landscape, where Transylvanian houses become magical gateways for plants, animals and aliens that seem to gather for a party. The plane tree (Platanus) is used as a symbol to associate the flying vinyl records with the soundsystem, as in Romanian the word “platan” is used both to name the tree and as slang by DJs, to refer to a turntable.

The fourth episode saw DIPLOMA and feeder.ro joining forces for the event’s Closing Party with the proper mix of art and sound featuring Piktor and Irina Mocanu, with support from Eirwud Mudwasser.

Known for his vibrant selections and publishings with Lokomotiv, Subtil and Baumbaum Label, Piktor managed to quickly build a name for himself as one forward-thinking artist. He also signs our second release, “Similar Feelings”, a purple coloured vinyl now collecting for repress on deejay.de. The party took place in the heart of Bucharest, in the courtyard of a beautiful historical building where a lot of people had the chance to dance and enjoy his engaging set while checking out the exhibition. The evening took on a distinct spin with Eirwud Mudwasser‘s intricately layered minimalist selections, laced with eclectic references and an unmistakable Balearic vibe. 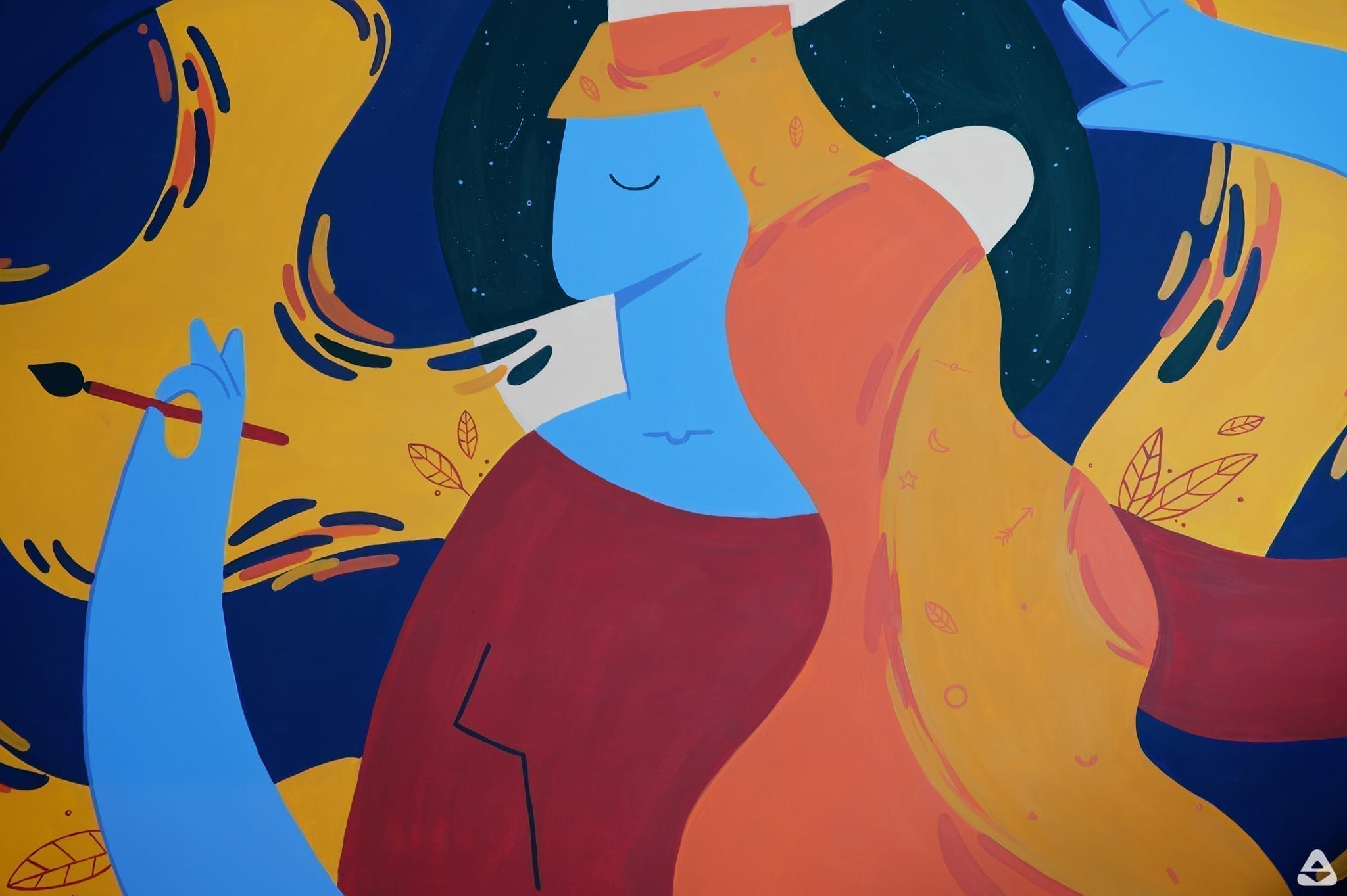 Irina Mocanu approaches a wide spectrum of topics, feelings, ideas and techniques, proving her versatility and passion. Here, she depicts the portrait of a creative person engaged in the process of painting with closed eyes emphasising the flow of information from the inner universe of imagination to reality.

With the project serving as a source of inspiration for almost 15 years, feeder sound will continue to showcase creative content while connecting the local and international audiences as the main goal. Stay tuned and make sure you visit our platform daily for the best alternative news, reviews, interviews, events and more!

Which music makers and visual artists do you think would combine their works in a creative way? We’re very curious so let us know in the comments below!