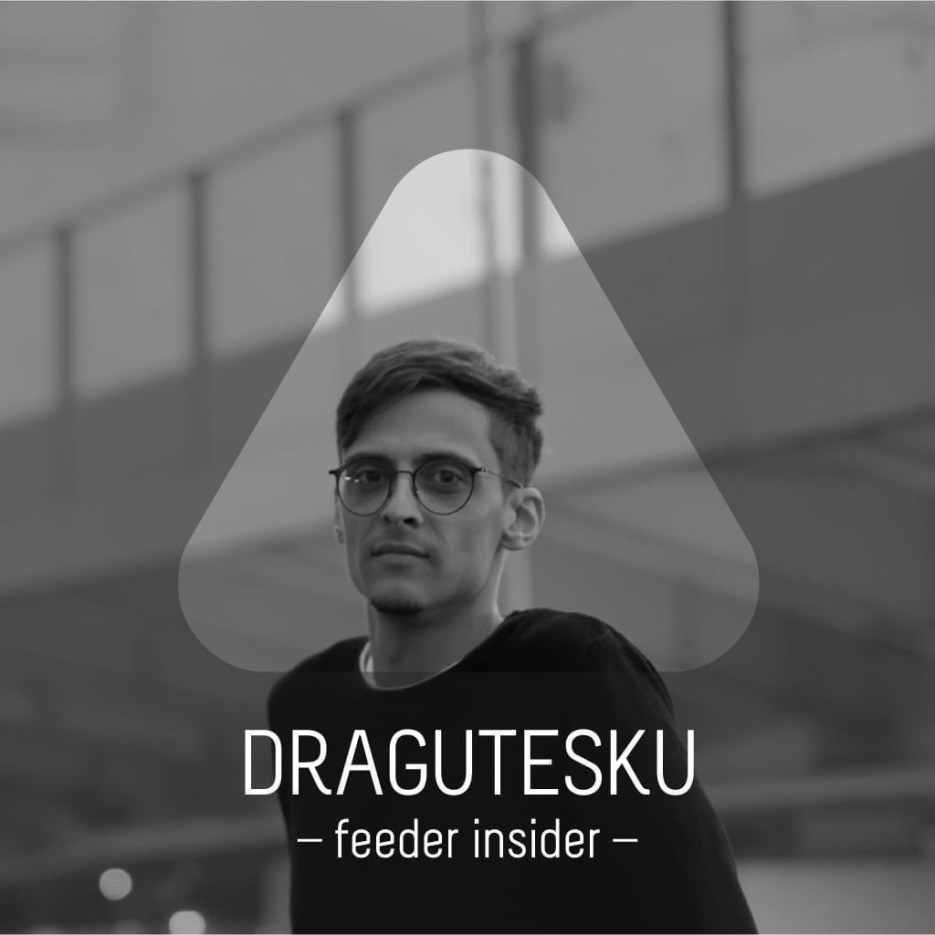 Making his appearance on the mysterious local scene, Dragutesku is a discreet artist who lets the sounds speak for him. On various occasions, you listened to Dragutesku’s creations on feeder.ro, either in the EP reviews or feeder sound section. In the past years, he produced exciting releases launched at Fapte Records, Tupiar Records, Masivarium, Perception Dub, Minim Records, Modeight, Parama, Unic, and is also the author of the first feeder sound disc. In 2016, we invited him to contribute with the episode 103 of the feeder sound podcast series, a record that hides feelings you want to come back to.

Read our conversation with Dragutesku and find out more about his creative process, collaborations, plans and his label, titled DRG Series.

A good day… as long as you live and breathe.
On the way to… the studio.
I’m thinking… about music.
Street art in Bucharest… freedom of expression.
A perfect breakfast… omelette, if I have the chance.
I often use… the smartphone.
I always forget… your name after we get acquainted.
In each… of us there is art.
My favourite movie… Interstellar.
3 artists who inspire me… Ricardo Villalobos, Bruno Pronsato, Fumiya Tanaka.

feeder.ro: Hello Dragutesku, we’re happy to talk following the recent launch of an abundance of tracks, without adding too many words, often leaving the music to speak for you. What is the story behind the character Dragutesku?

Dragutesku: Hi, feeder. I am also glad to talk to you. I don’t think that Drăgutesku is a character, but a part of me, and we are the same. All day, he’s dealing with music. Sometimes he’d like never to sleep and fill his time solely with sounds. He would have wanted a lot more time for that. Every man is born with a fictional “character” in his mind. Then he realises that the character does not exist. When I start to make music I feel beyond the psychological side, and I am truly free, 100% present, hence the name of the song on the EP “Suflet Prezent” [Present Soul]. No more “me” or “you”, it’s just music.

f: How did you connect with electronic music, when, and who inspired you?

Dragutesku: I’ve had a connection with electronic music since I was a teenager. Some time at 16 I attended the first Sunrise party, at Politehnicii. Ricardo Villalobos b2b with Luciano. It was a very successful party, and I think that since then it has been an awakening inside me for this kind of music. Then, there were the parties in Mamaia, currently known as the famous Sunwaves Festival, and after years of analysing music and the concept of parties, I decided to follow my dream and start it in music.

f: What’s the link between the alias Dragutesku and the music you produce?

Dragutesku: The connection between us is clearly the music, its sound and its vibration. They understand each other so well that they manage to convey sincere feelings, coming from the soul, on some notes and harmonies. I think this is what really connects us, and we go beyond logic.

f: How does the work on a new musical arrangement begin and what are the processes you are going through until you consider a track complete?

Dragutesku: I don’t think that the process of working on a musical arrangement ever has a specific rule, any sound can inspire you, be it kick or clap, harmony or voice, it doesn’t matter. Indeed, inspiration comes seldom, but when you feel something inspires you, everything goes smoothly and so fast as if time expands and stops and becomes non-existent. There’s a test process before the track reaches completion, on multiple types of speakers, in the car, even on the laptop; I listen to it in different days and moods. The final test is to play it for the public, to feel the energy and the reaction.

f: Some artists have a whole range of rituals, practices, or methods to disconnect from everyday life to go deeper into the musical universe. How would you describe the schedule of a day in the studio?

Dragutesku: I start the day by searching for inspiration, since I wake up and until I go to sleep, for the most part. If I feel that something is not going as it should, I switch to the simple routines of every man, go for a walk with friends, if it’s beautiful outside I spend more time in the sun to charge myself with energy. However, every walk happens while listening to music. I listen to music before I fall asleep, too; I’m exactly like the character in the movie “Baby Driver”, a musical maniac.

f: When you find a theme, an image or a movie scene that inspires you, what are the stages you go through until you manage to transfer that feeling or sensation into sound?

Dragutesku: It’s a long process to reproduce the feeling and sensation in music: you go to the studio and begin; it’s possible to start with the feeling you had when that moment inspired you and the brilliance of the idea that came then, but along the way, you get in another direction.

I go with the flow, I’m not stuck on something. I also like to combine styles. This is how the label DRG Series was born. I do not follow the rules, I enjoy freedom; music means freedom.

Recently I produced an ambient/downtempo track, which can be listened to on my Soundcloud page (Dragutesku). It’s called “You are not you” and has a profound and sincere message.

f: The EP “Suflet Prezent”, which we released together in January, comprises three tracks that illustrate complex concepts and no clear answer. What does soul mean to you or how do you transmit the state of the present?

Dragutesku: I wanted to leave this paradoxical space in the music so that everyone can live and perceive according to his experience. My perception of these track names, such as “Suflet” [Soul], is that it surprised me in the deepest place of my soul and I managed to translate that exact place into music; and “Prezent” [Present], is the state of presence I’ve described above, one also can understand that my soul is present in music.

f: You often work with visual artists such as Anita Frâncu for the covers, or with sound engineers like TIJN for mastering. Why do you prefer to imprint the sounds on the discs, with extra costs and work, instead of digital releases?

Dragutesku: I don’t want 100% to be vinyl only, but somehow that’s how I started, and so it remained. I realised along the way that you limit yourself to one category of people, and there are so many who also want digital, so I began to post my tracks on Bandcamp. The music there is independent and “unreleased”, something totally different from the vinyl tracks. I wanted to offer them something exclusively in digital format, and I hope I’ve succeeded in pleasing them all.

f: We noticed that more local artists play your tracks at events and festivals. Whom would you like to work with for the upcoming releases and why?

Dragutesku: At the moment, I collaborate with the character dragutesku :). In the past, I was part of the project “Nice ’n Trick”, currently known as “Dragutesku & Trik” (Nice was my alias, before dragutesku). We have quite a large number of pieces of vinyl we released together and a wide range of tracks in digital format, but each one went on his way. It seems difficult to find someone so similar and manage to feel the same sound to the point that there’s no contradiction with the other. If I find someone whom I can collaborate, and there’s a good connection, I would be delighted, I think it would feel as if you have a twin brother.

f: Every year, there are more and more events and festivals dedicated to alternative music, arts and film in Romania. On feeder.ro you can find a list of over 90 recommendations. Where can we listen to you in the following period?

Dragutesku: In Romania, in Cluj Napoca, and abroad, I’m returning to Tel Aviv, to the great club The Block, and then in Bucharest. There will be many other surprises as well.

Words by ubic
Translation by Emilia Cazan
Photos of the artist by Petre Ghiocel
© feeder.ro