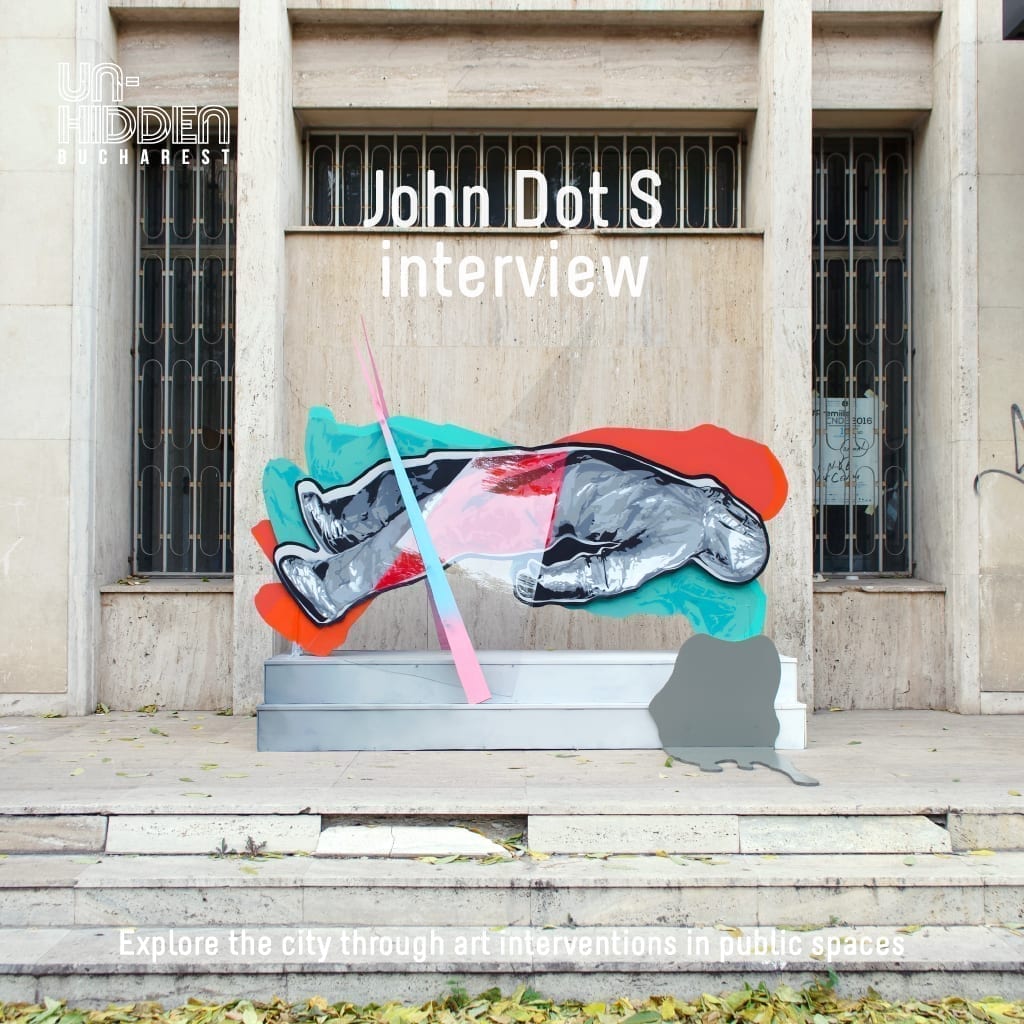 How to get in direct contact with people through street art? How to cultivate the need for awareness by experimenting? How to integrate the inner search into the public space? These are some of the topics we’ve discussed with artist John Dot S in an exclusive interview part of the Un-hidden Bucharest II project. Enjoy!

f: Hello, John, we’ve been following you on Instagram and saw that since October you’re working in a new studio. Tell us about the change, your colleagues and the projects initiated in the new workspace.

John Dot S: Hi, the relocation – :)) – it was a bit complicated because of the ongoing projects and the fact that any such change for me is terrible – pack things, then unpack them, stairs, vans, transport, renovate… but we moved pretty well eventually. The colleagues came organic, we got together around an idea and started to get the mechanism running. Regarding personal projects, I’ll share a few things but won’t talk yet about the ones in the new space because they’re work in progress and I don’t want to disclose anything at the moment ;).

f: From painting to illustration and digital graphics, and back to painting, then turning the whole city into a space of artistic expression, you like to experiment. What have you never done in art and is at the top of the experiments to be carried out in the coming period?

John Dot S: As I said before, I have an experimental spirit, am always looking for elements, techniques that can expose my thoughts and experience.

Regarding what I’m trying to understand and build now, I was attracted in this period by objects, materials, volumes through which I can communicate directly with people and that help me understand and become aware of what I have become. People, being in direct contact with this volume, may feel more organic. 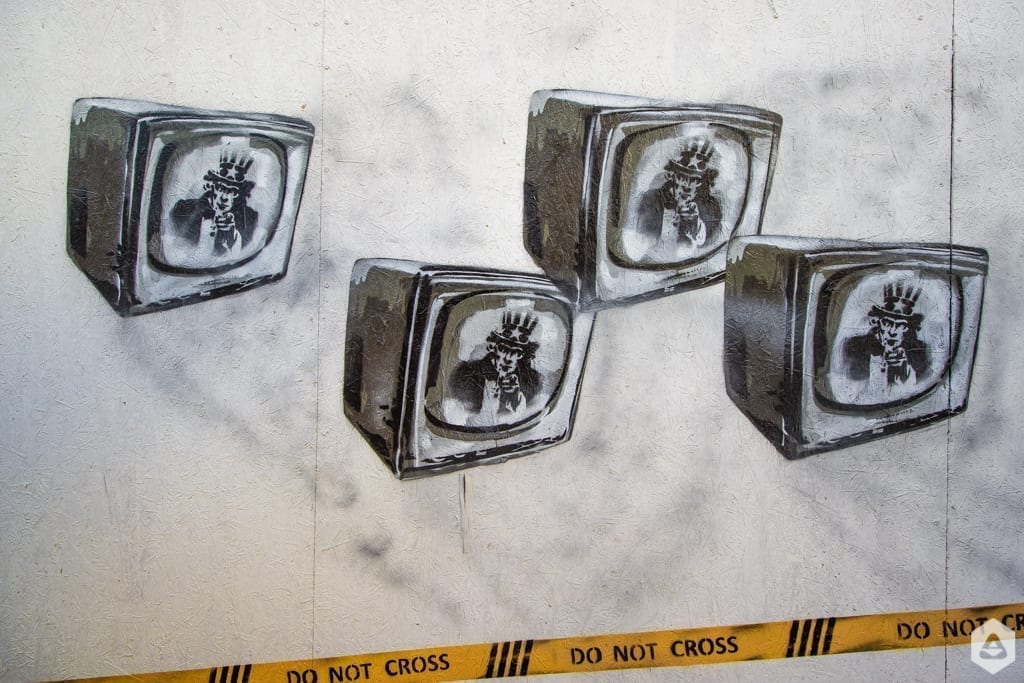 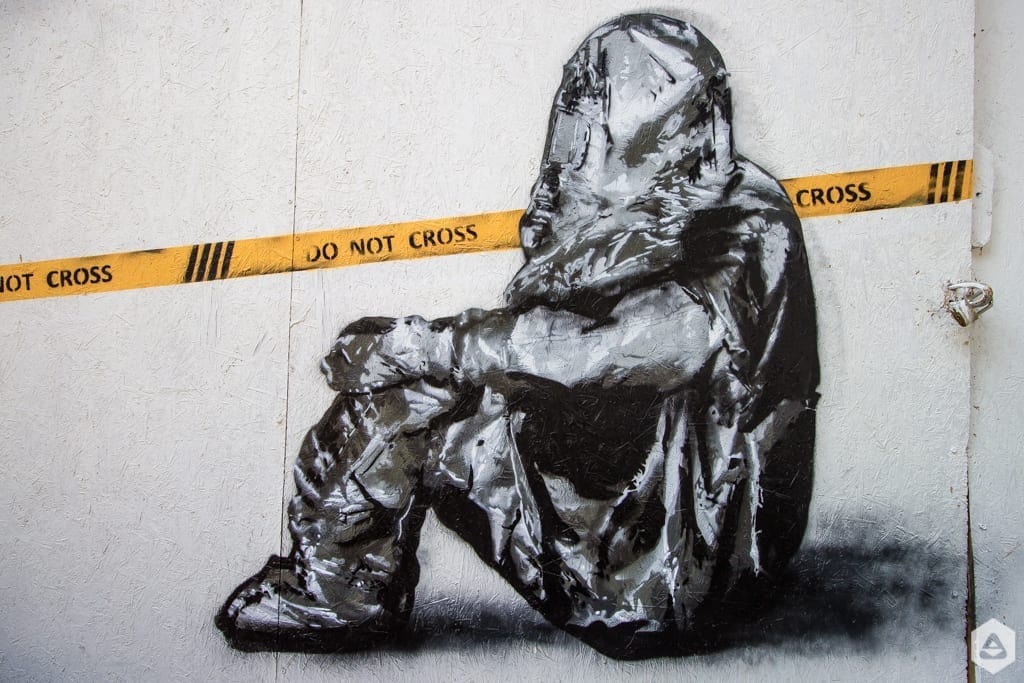 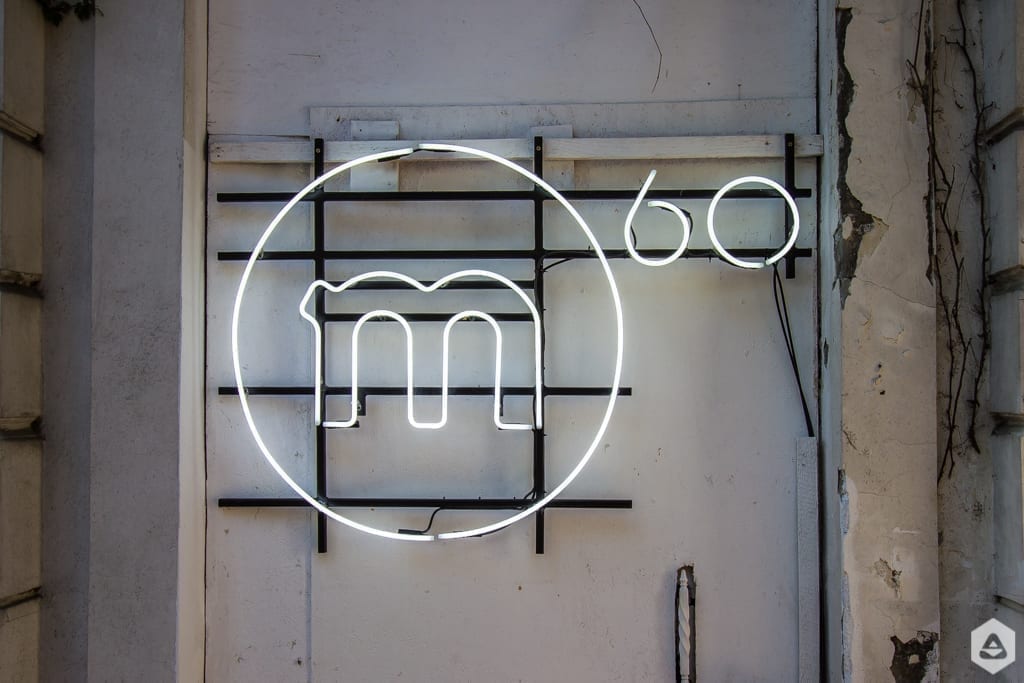 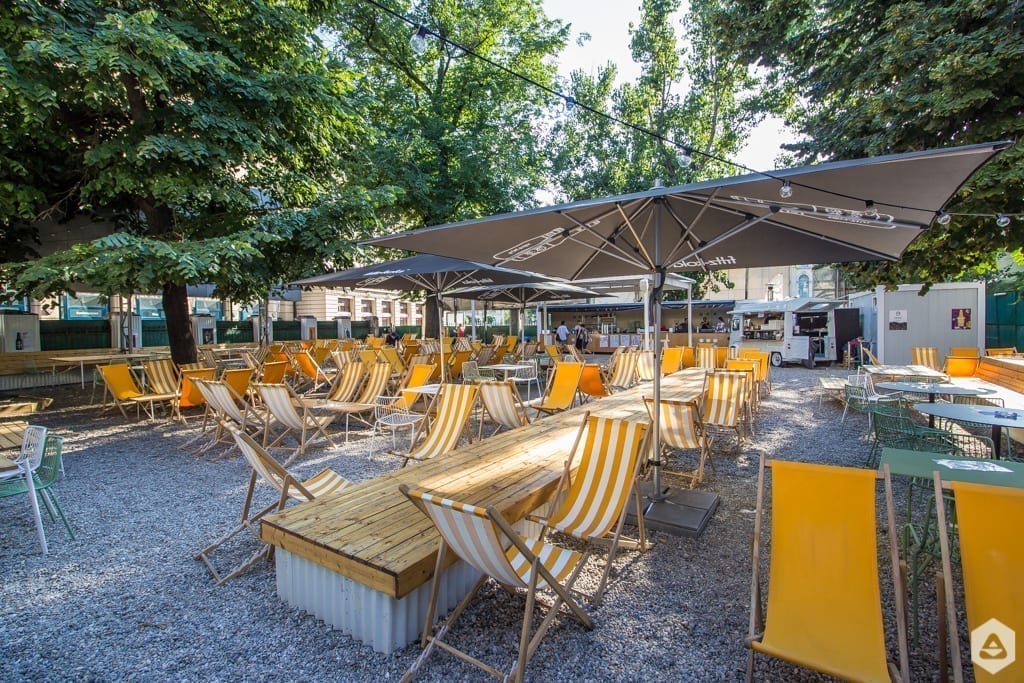 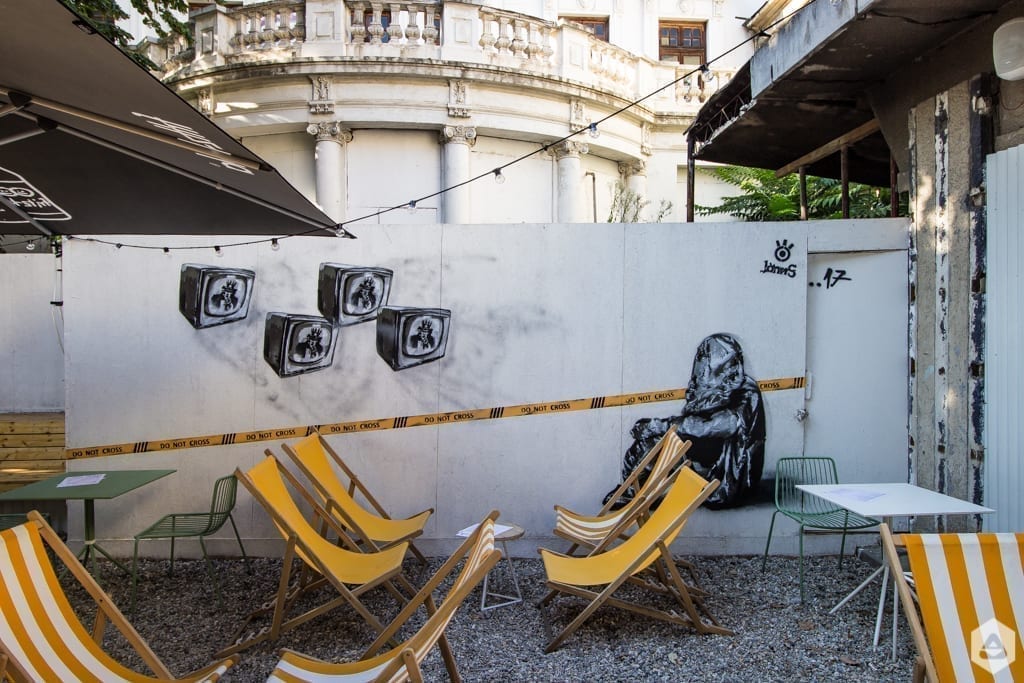 f: Suppose your works now intersect with another field – performance, film, music, architecture or even science. Where would you like your creativity to manifest and why?

John Dot S: Of course I’m attracted to performance through what I said above – contact and direct communication with people.

f: Also in choosing the working technique, at least in street art, you like challenges. You said that stencil art, a not so easy technique, means for you “a balance between patience and consistency.” How important is the technique through which you share a message and how does it manifest in balance with the space in which you represent the message?

John Dot S: Indeed, stencil art is not an easy technique even if it seems so, it requires a more complex preparation of how you are going to create a work.

The technique at some point becomes irrelevant, I think space is more important, the inner search, the research you do looking for experiences, feelings, that I think is important. The technique is the mechanism by which you work, that’s all! :))

f: Your work expresses that spirit of criticism and the need for awareness that we often encounter on the international street art scene. There are certainly artists who inspired you. If you could work with one of them, who would it be?

John Dot S: It’s more about the need for awareness. Here the question becomes a bit tough. Of course, I was inspired by many artists, so it’s hard for me to give a name. I’d work with many of them.

f: What’s it like to be a street artist in Bucharest? What does a working day look like “on the street”?

John Dot S: It’s the same as being an artist in Berlin, Sovata, Vaslui, etc., I don’t think the city is hindering in any way. If the work is with approval, everything is quiet, you have time to feel, to understand, to play. If not, we’re no longer talking about a day, but 10 to 15 minutes :)). I went out, but lately, I preferred to look for spaces to play and prepare the following interventions (shhhhhh). 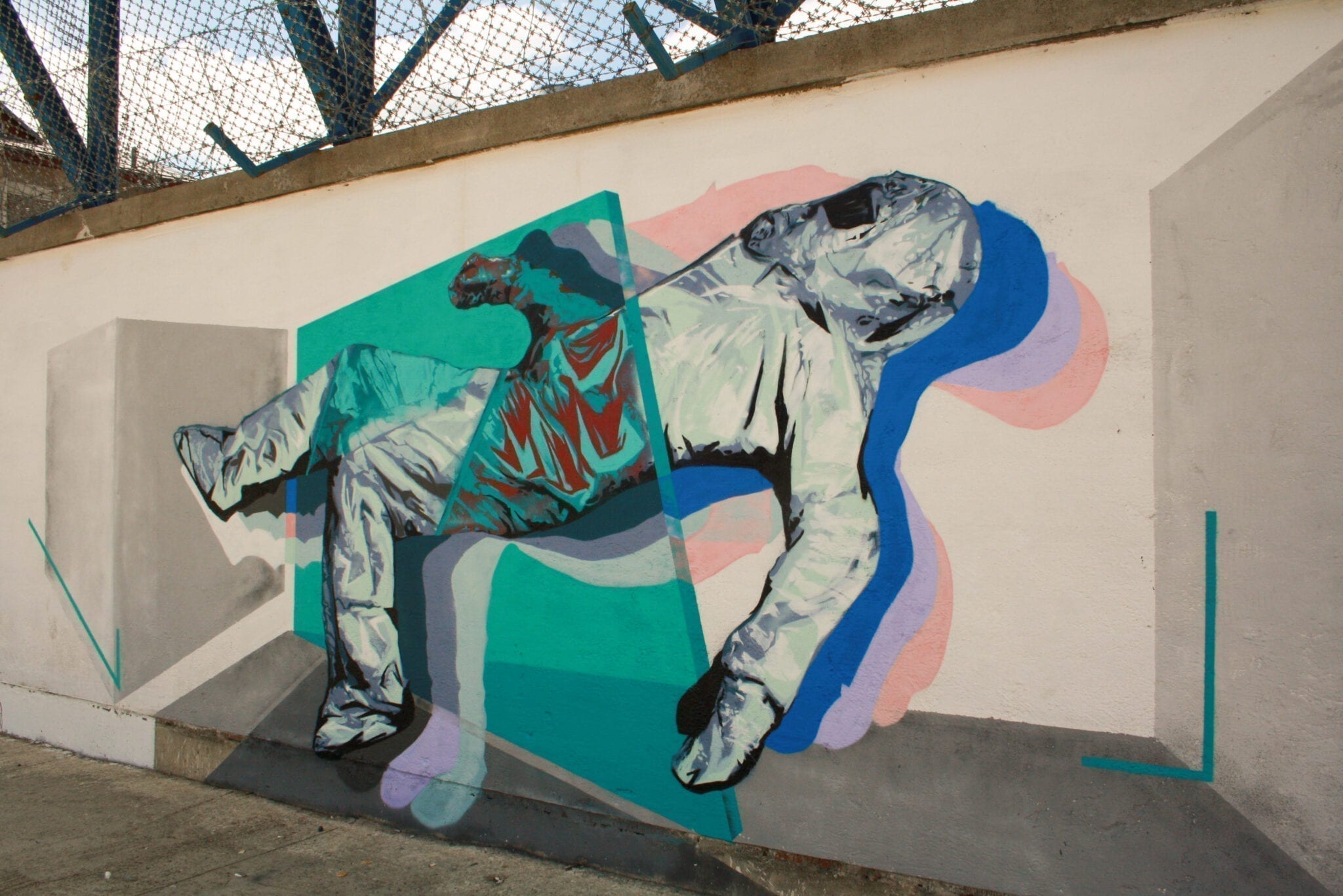 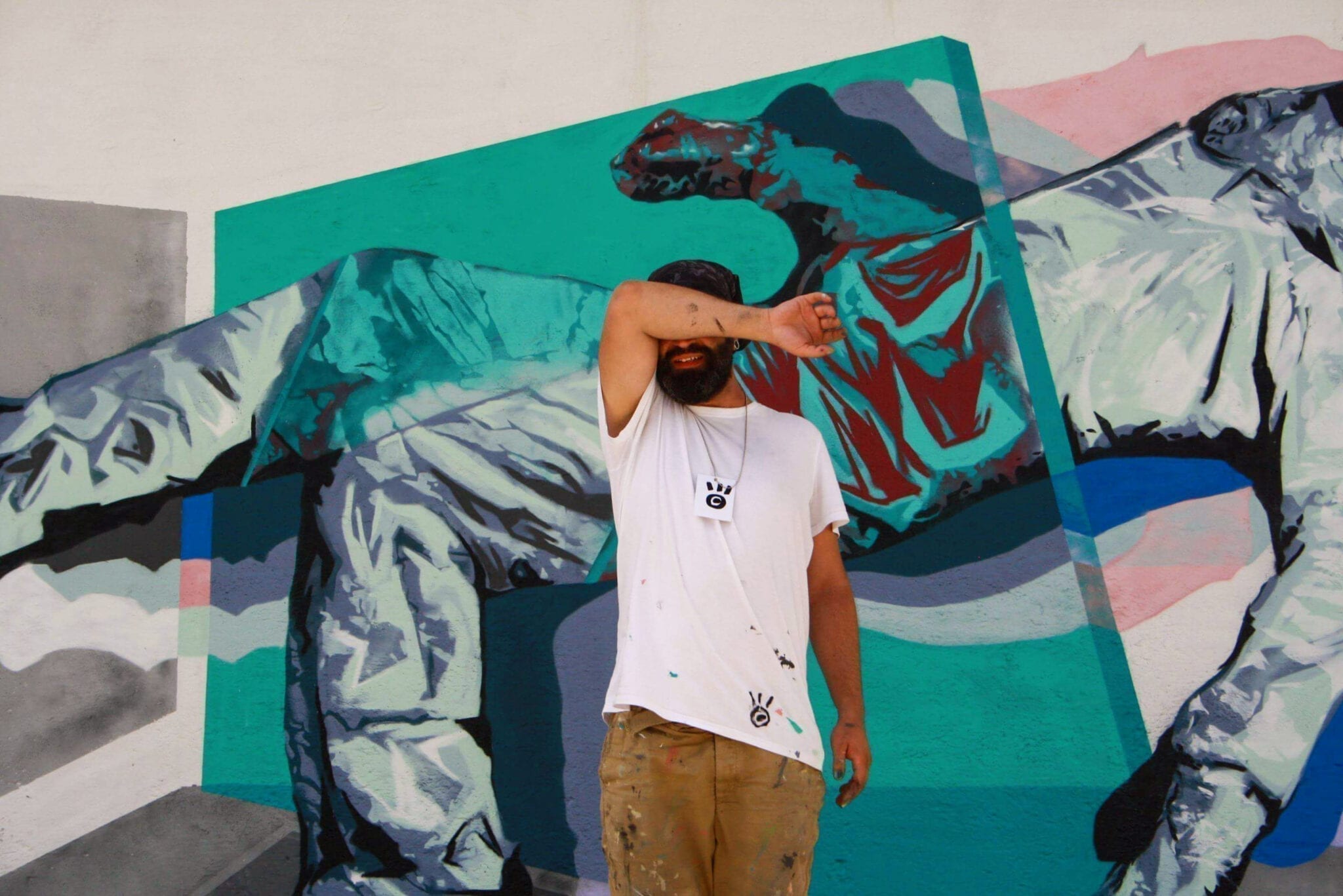 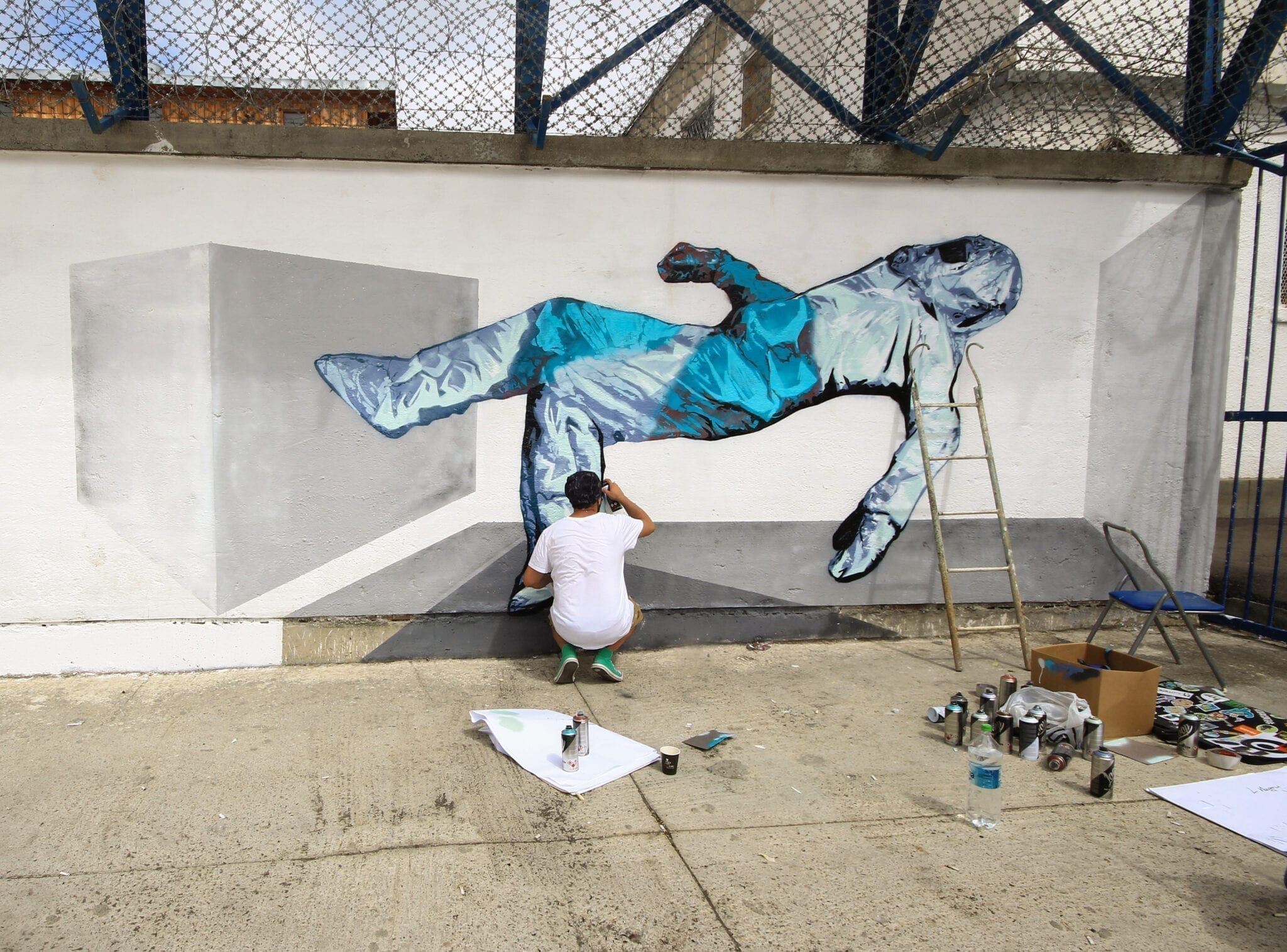 f: Of all the cities of the country, why did you choose Bucharest as a “laboratory” of artistic experiments?

John Dot S: I was not born in Bucharest, so it was the closest city where I could express and manifest, but this doesn’t mean that I can’t move my “lab”. 😉

f: Talking about your installation SENS [SENSE], made within the Un-hidden Bucharest project, you were telling us that you are interested in the relationship between street art and the community. How do you feel this relationship has evolved in Bucharest since you became part of the movement?

John Dot S: I’m attracted to this subject, the community, some have become aware of the street art scene, others still consider it vandalism. Great efforts are being made on both sides and I enjoy this the most, the evolution is somewhat constant. 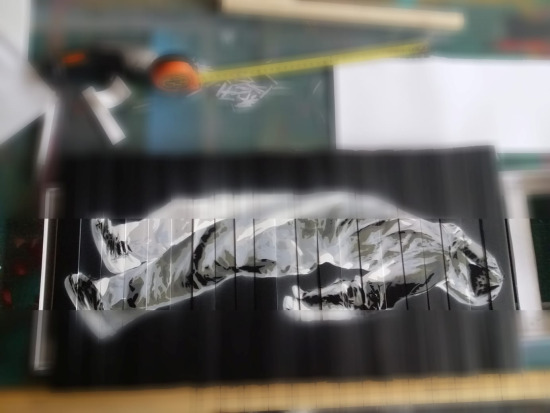 f: At our Open Call you signed up with a model that later became the SENS installation. You shared with us that you’re also working on other pieces for an exhibition. Can we see a preview?

John Dot S: Yes, hmm… :)) I’m not telling you anything about it, only that I’m working intensely and preparing this intervention/ exhibition for the end of spring 2019. I don’t know yet where and how and I’ll just leave you with a small preview, only a study… 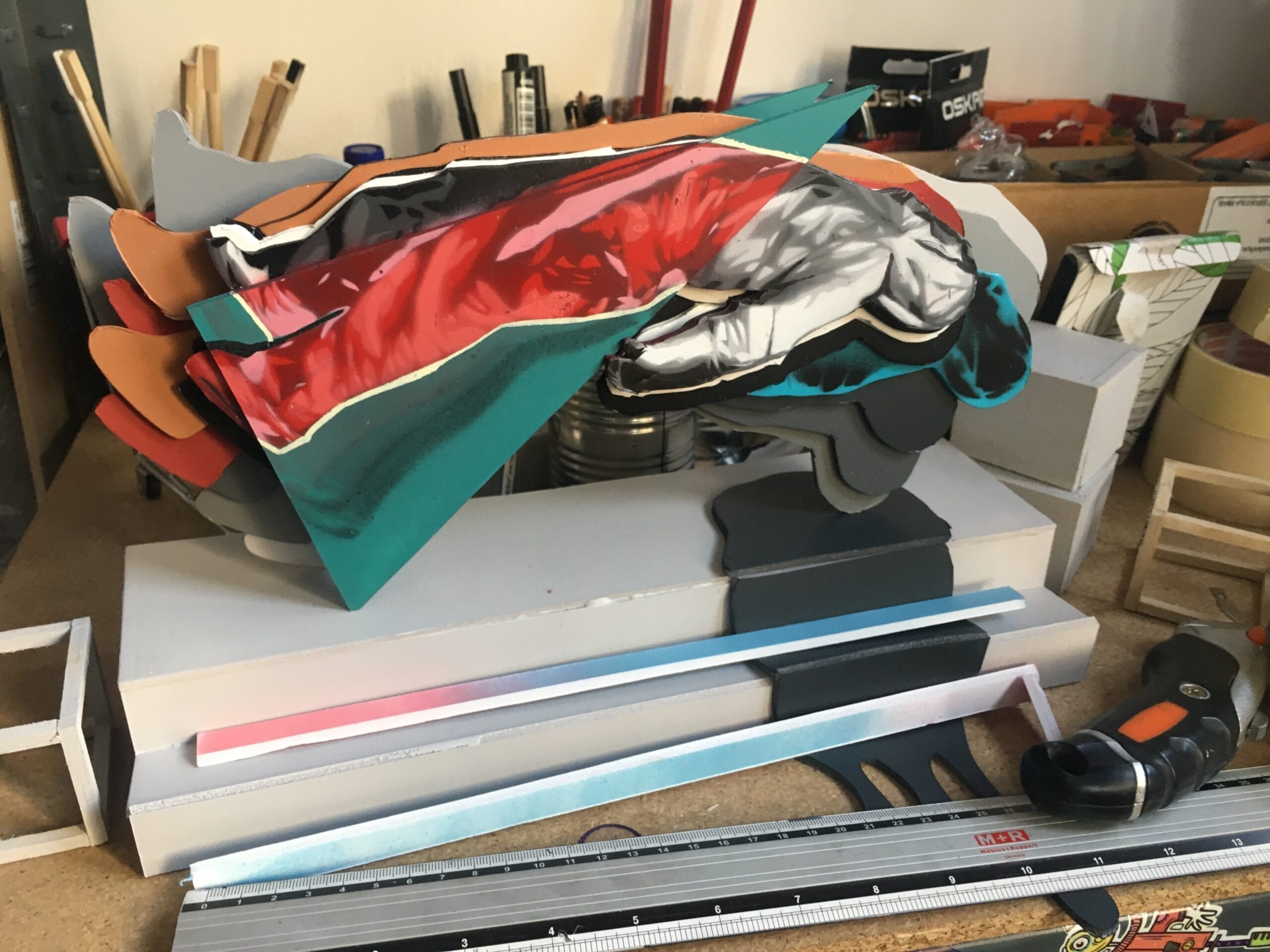 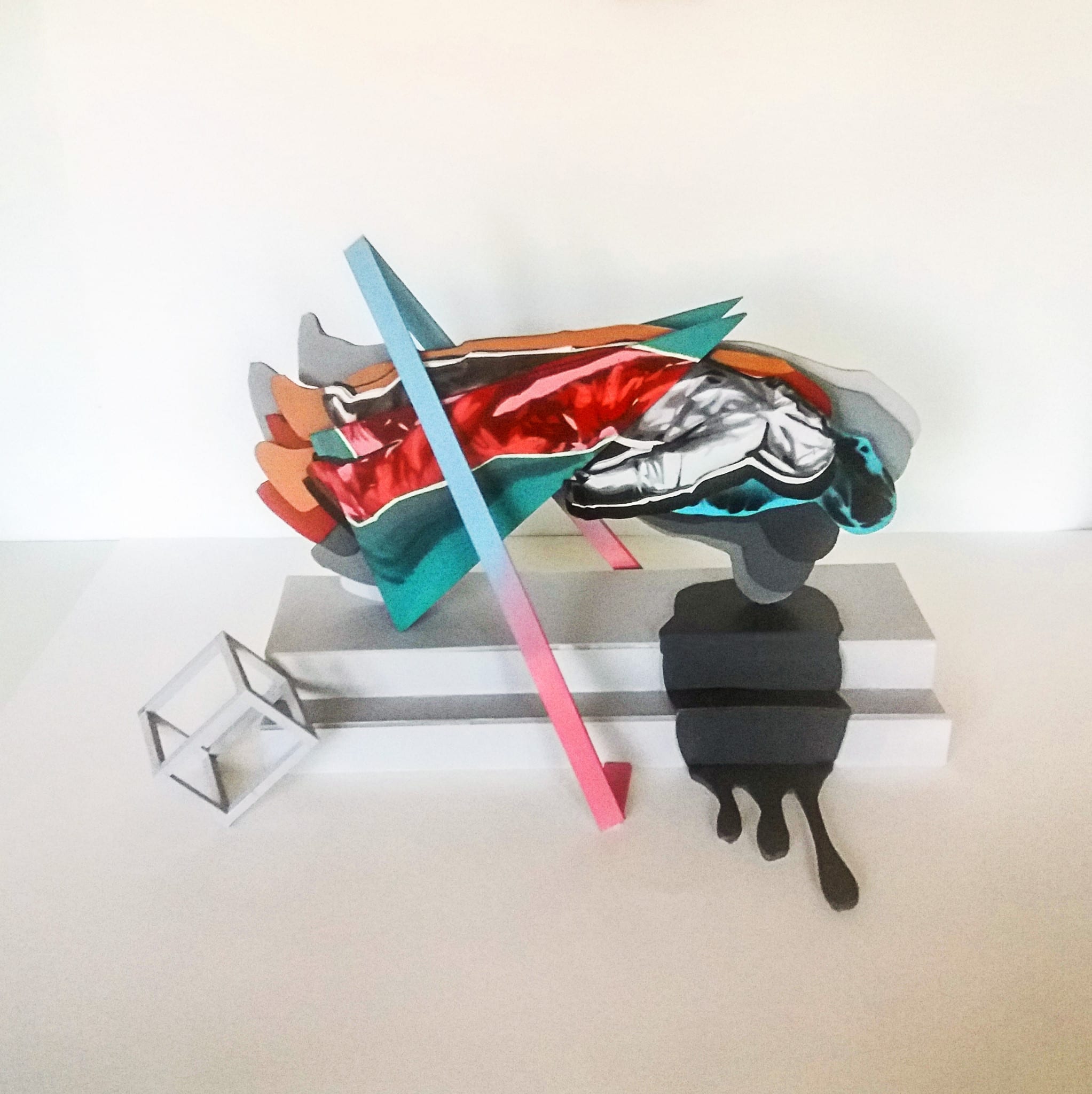 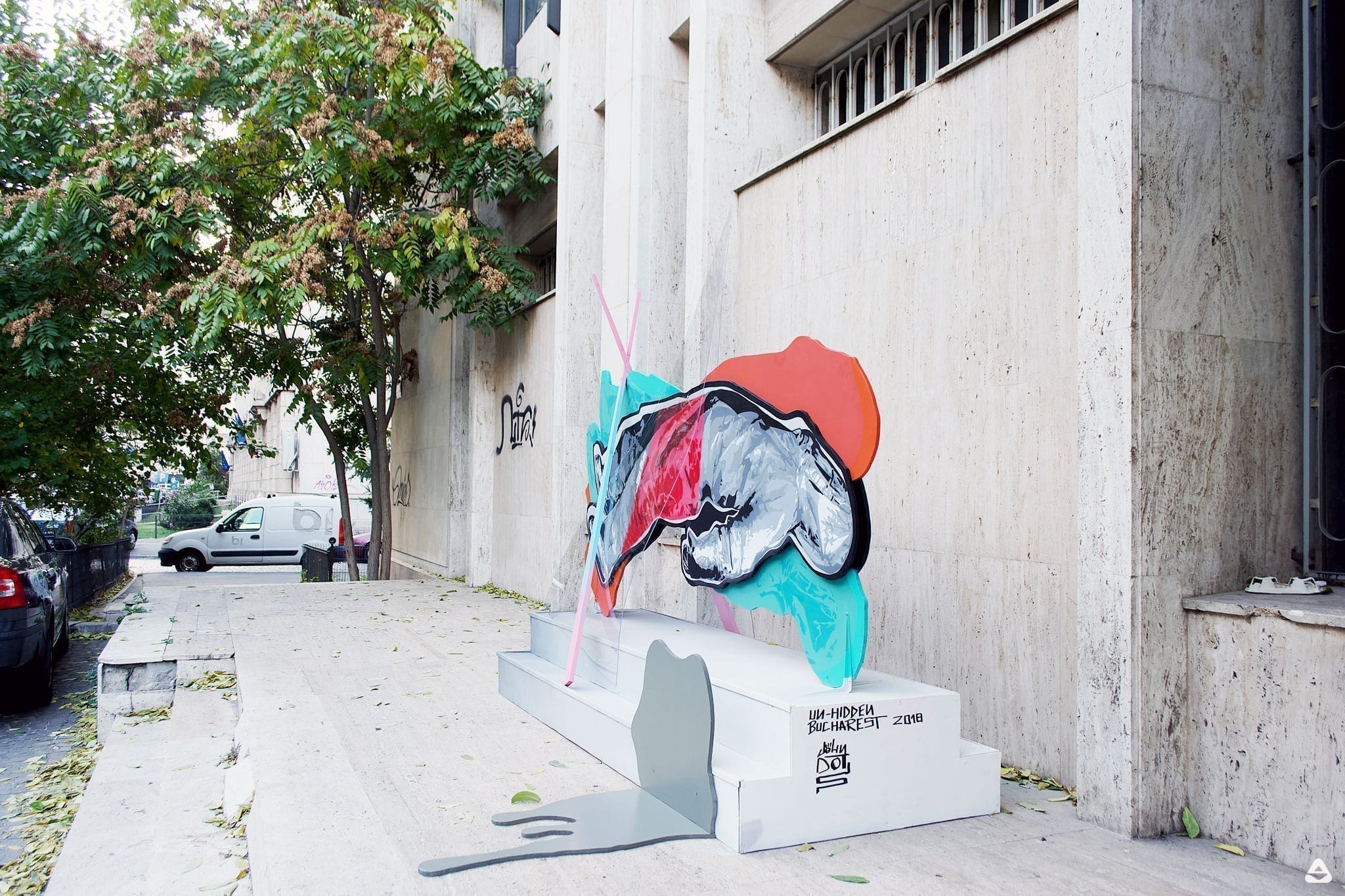 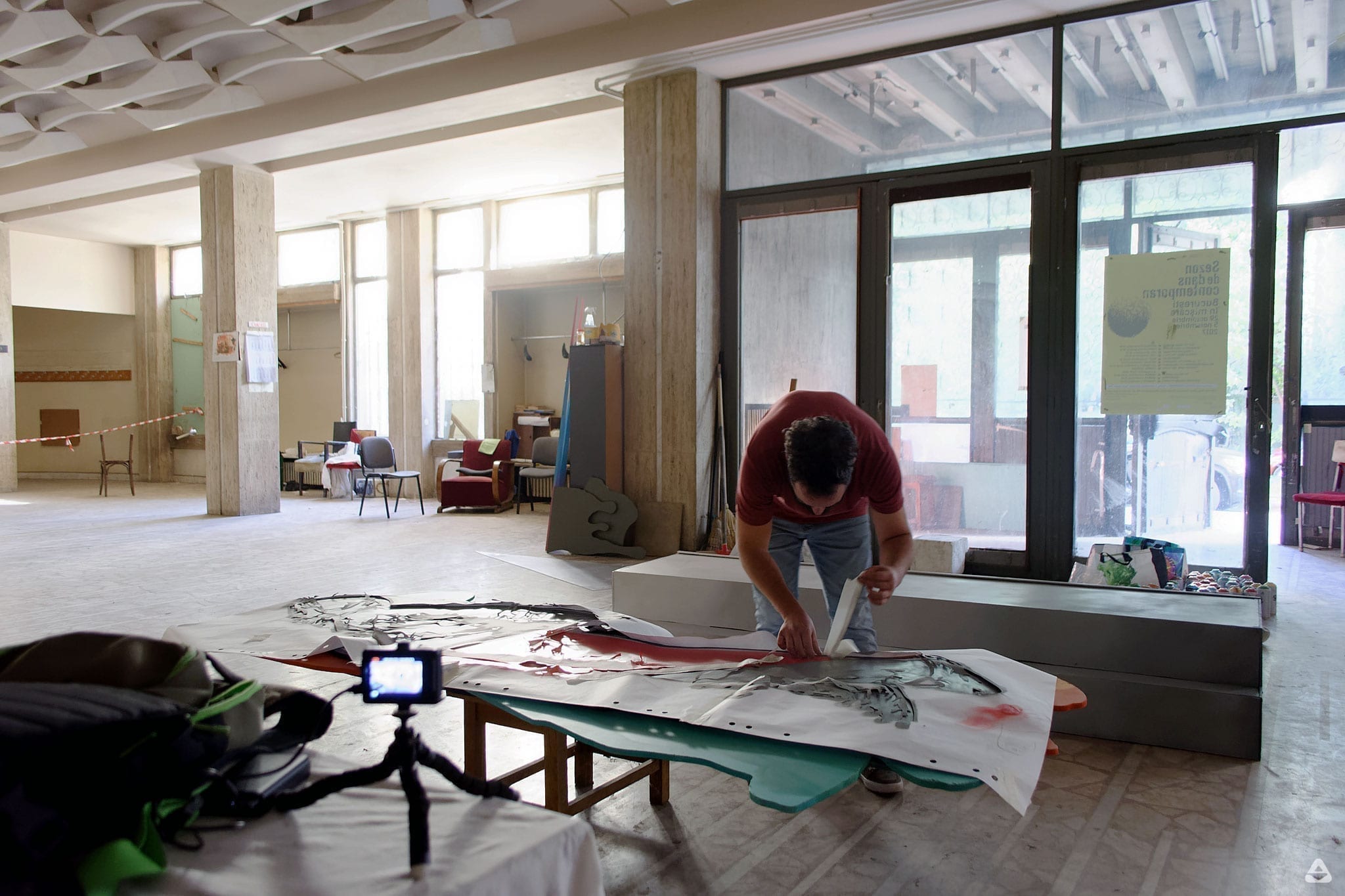 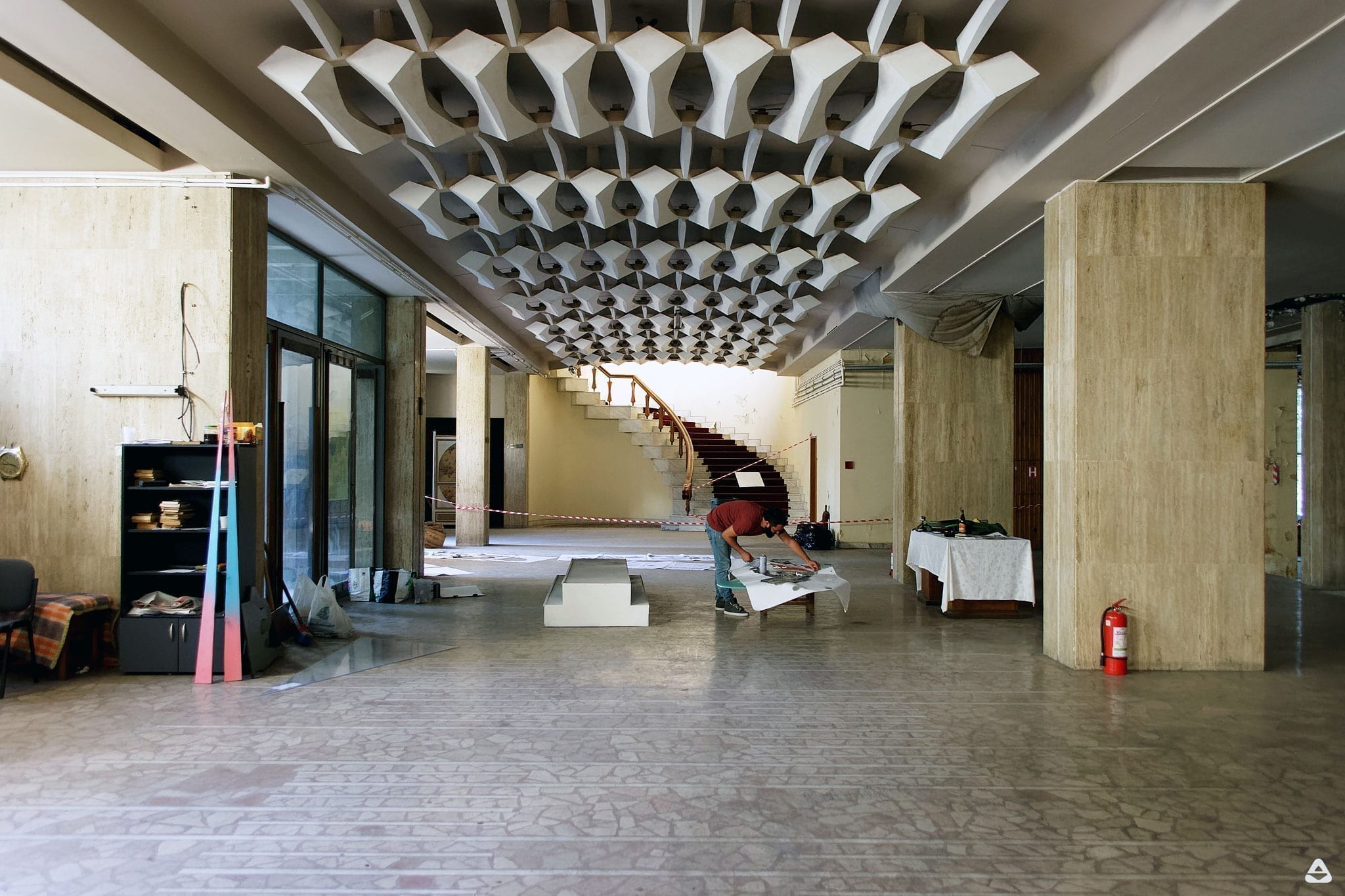 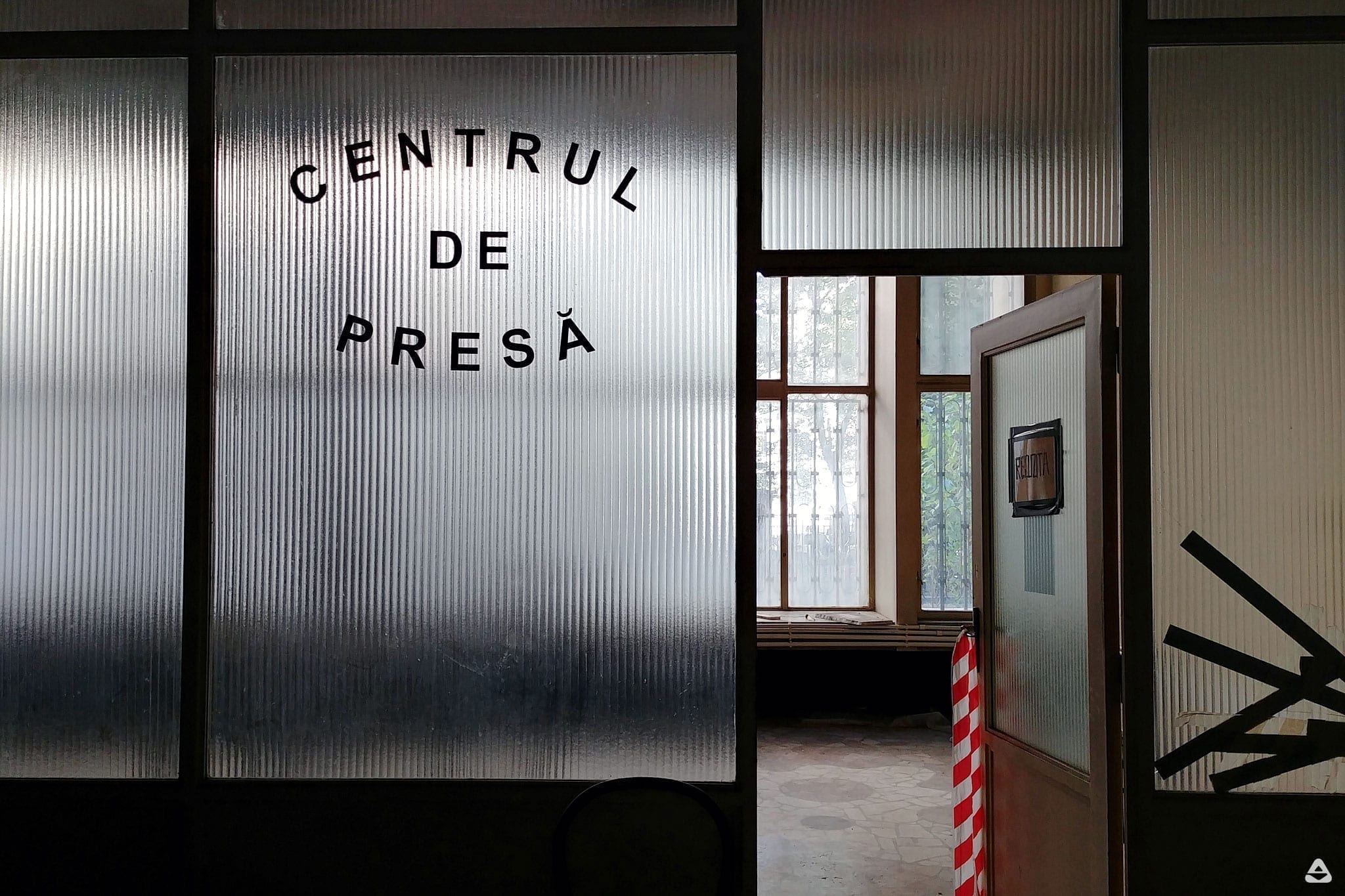 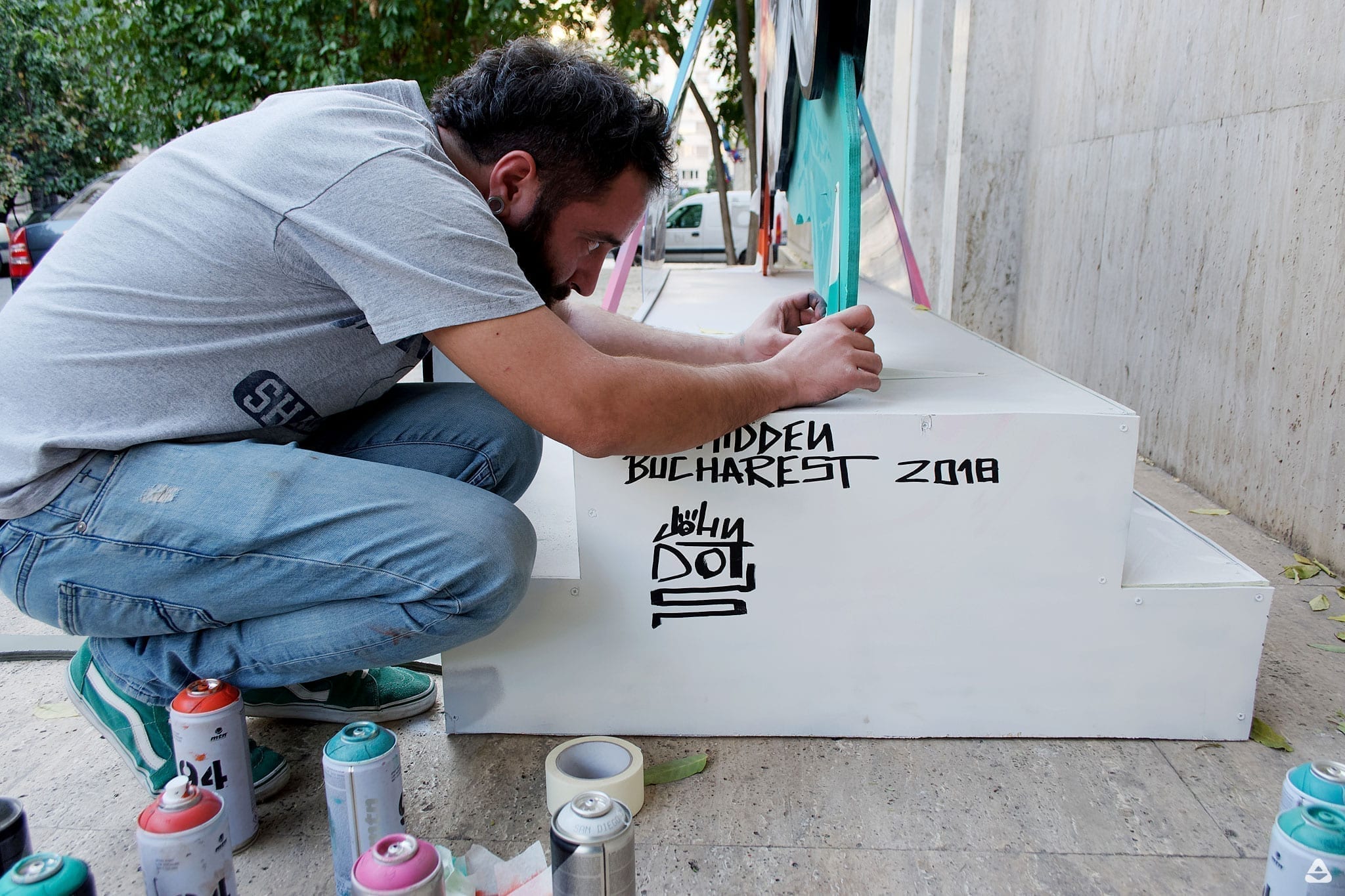 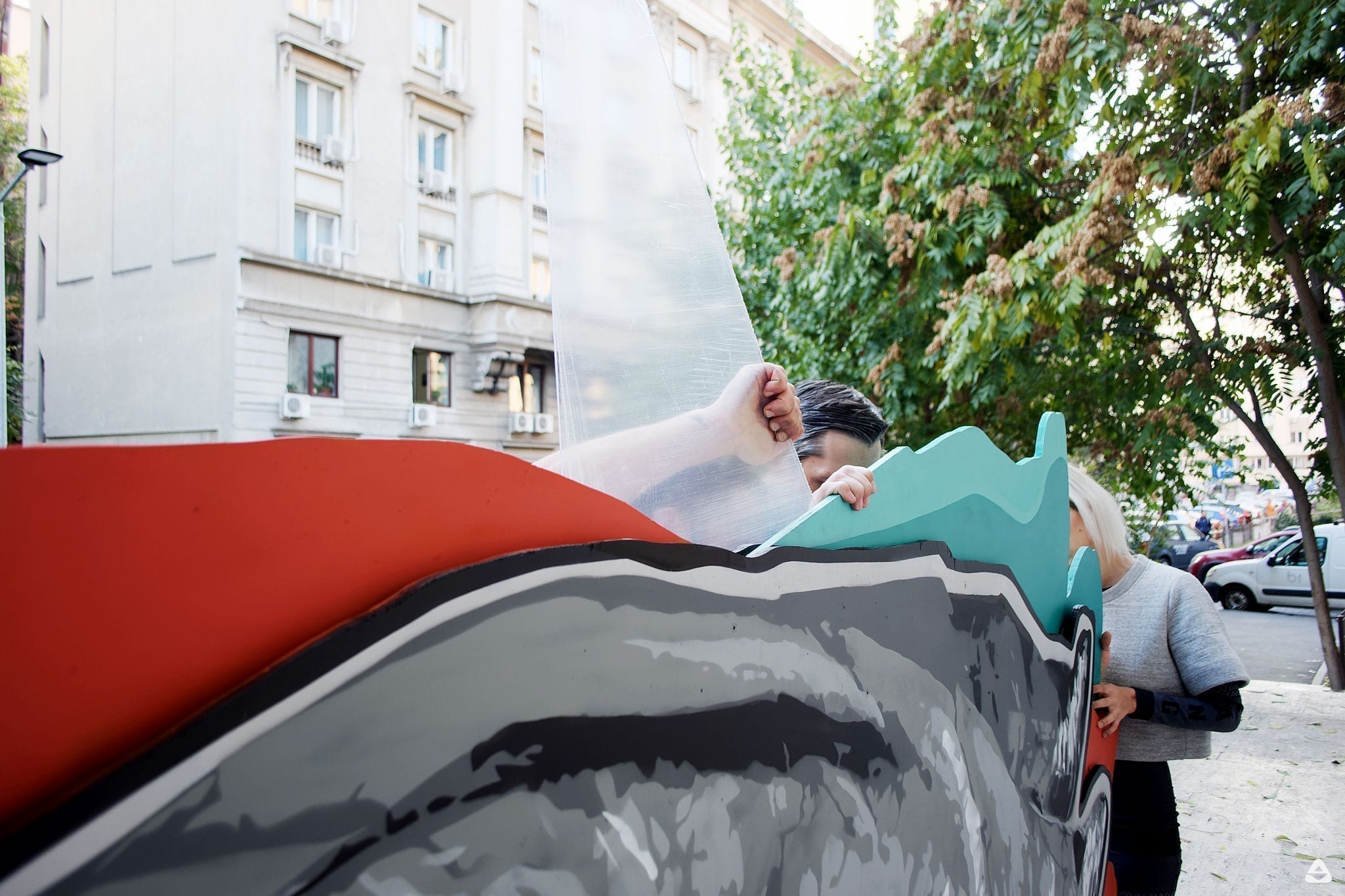 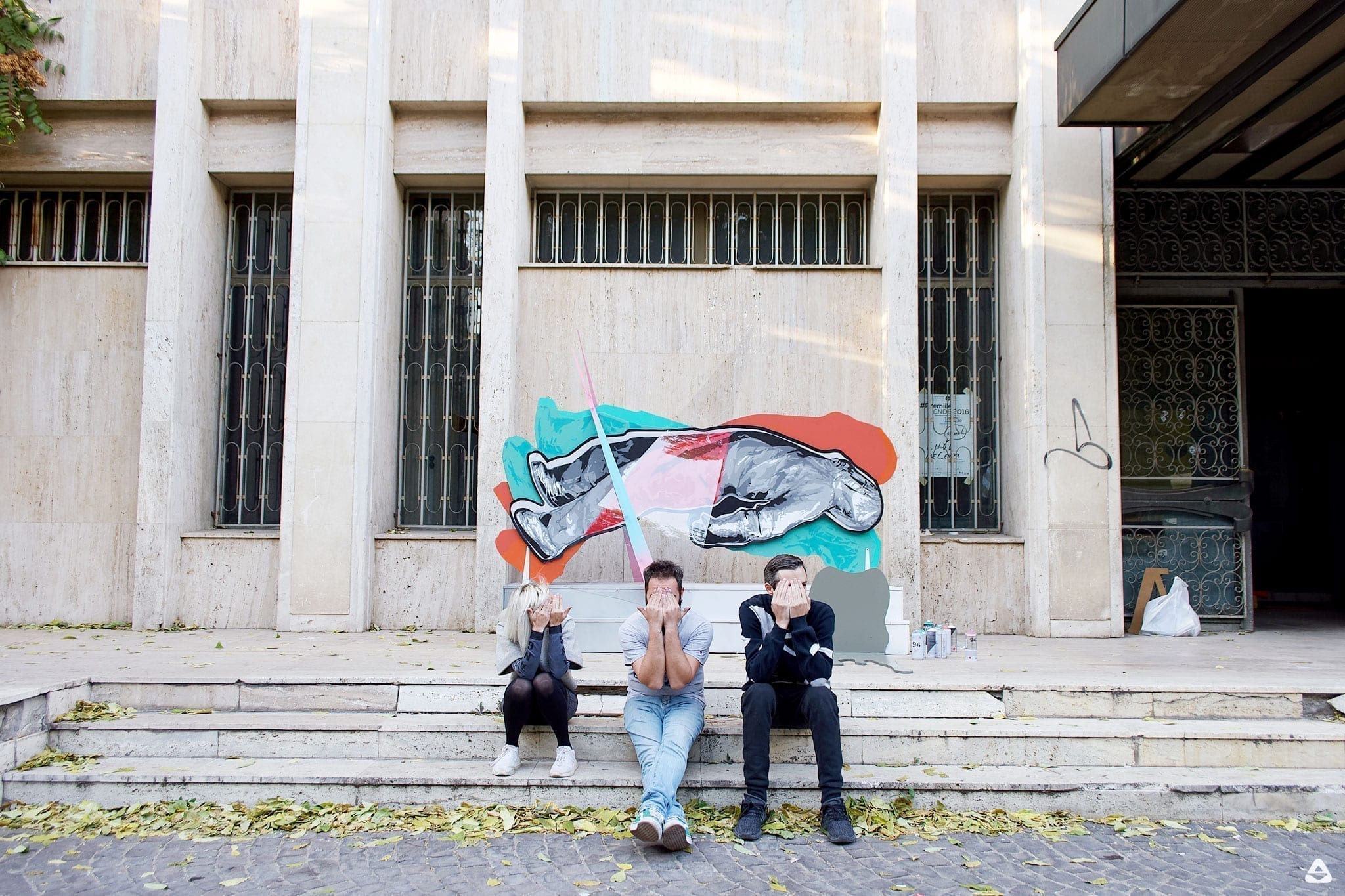 f: Your intervention for Un-hidden Bucharest took place at the Omnia Hall, the former conference hall of the Central Committee of the Communist Party, which will soon become a new center of dance. What are your impressions of the symbolic and functional transition of the building and the opportunity to put your mark on this space?

John Dot S: It was an intense experience, especially since I had the opportunity to create there a large part of the installation and the whole building has become an immeasurable studio :). Being a space of a “penitentiary” regime in all fields, I realize that the freedom of art (in terms of artistic interventions and destinations) was once again victorious and I am glad that I also took an arrow in this direction.

View his work on the Un-hidden Bucharest II map.

This article is part of the Un-hidden Bucharest series of interviews with local street art and graffiti artists, published weekly on feeder.ro. Together we will enter their artistic universe and learn how the city can be regenerated through artistic interventions in the public space.