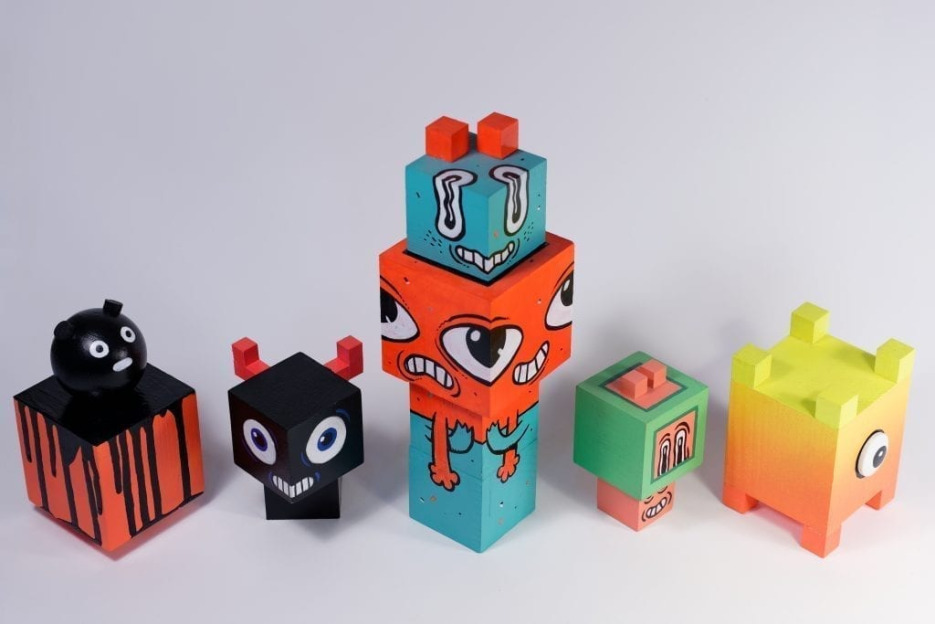 Pisica Patrata invaded Romania’s streets and walls, and his characters reconfigured abandoned urban spaces. In the last years, we have been pleased to have many opportunities to collaborate with the Pisica Patrata, creating one of the most beloved murals in Bucharest and a street art installation at Capitol Summer Theatre (2008, 2016, 2017). Also, at Lente indoor and in the urban garden you can find the mural made in 2016 as part of the Murals series and the wooden totem Un-hidden Bucharest made in 2017. Also in collaboration with the Un-hidden Bucharest project, Pisica Patrata has installed six wooden panels on the front of the building Cina, hosting the M60 coffeeshop (2018).

The collection of art toys made within the Un-hidden Romania street art project are assembled from wood and hand-painted by Pisica Patrata.

The good news for those passionate about street art, toy collectors and contemporary art lovers is that some of these wonderful art toys created by the Pisica Patrata in collaboration with Un-Hidden Romania are available in the online art gallery feeder.ro/shop.

One of the small urban toys is a miniature version of the wooden totem installed in 2017 by Pisica Patrata in Lente Garden on Dionisie Lupu Street, in the first edition of Un-hidden Bucharest.

Alexandru Ciubotariu is one of the most appreciated illustrators and street artists in Romania, as well as the founder of the Comic Book Museum. He works constantly, draws square cats and accepts all kinds of challenges. His street art work signals abandoned places and inspires urban dialogue. Ciubi is one of the artists with who we collaborate with interesting results in projects such as CAPITOL Cinema / Summer Theater and Un-hidden Bucharest. Pisica Patrata is a versatile cat, ubiquitous in the local public space, which warns many marginalized or even avoided subjects.

More about Pisica Patrata on fb.

Un-hidden Bucharest is co-funded by AFCN (book thematic area). The program does not necessarily represent the position of the National Cultural Fund Administration. AFCN is not responsible for the content of the program or the way the program results can be used. These are entirely the responsibility of the beneficiary of the funding.

About Save or Cancel
Since 2008, Save or Cancel is a medium of communication and propagation of the arts and culture, promoting and facilitating their role in contemporary society.
The self-initiated multidisciplinary programs of Save or Cancel aim to identify sustainable and adaptable opportunities for (re)valorization of the existence through architectural, cultural and editorial projects.

This article and other unpublished materials will be reunited in the book Un-hidden street art in Romania, printed in 500 series. Visit the project’s page to find out more about past, current and future activities: https://feeder.ro/un-hidden