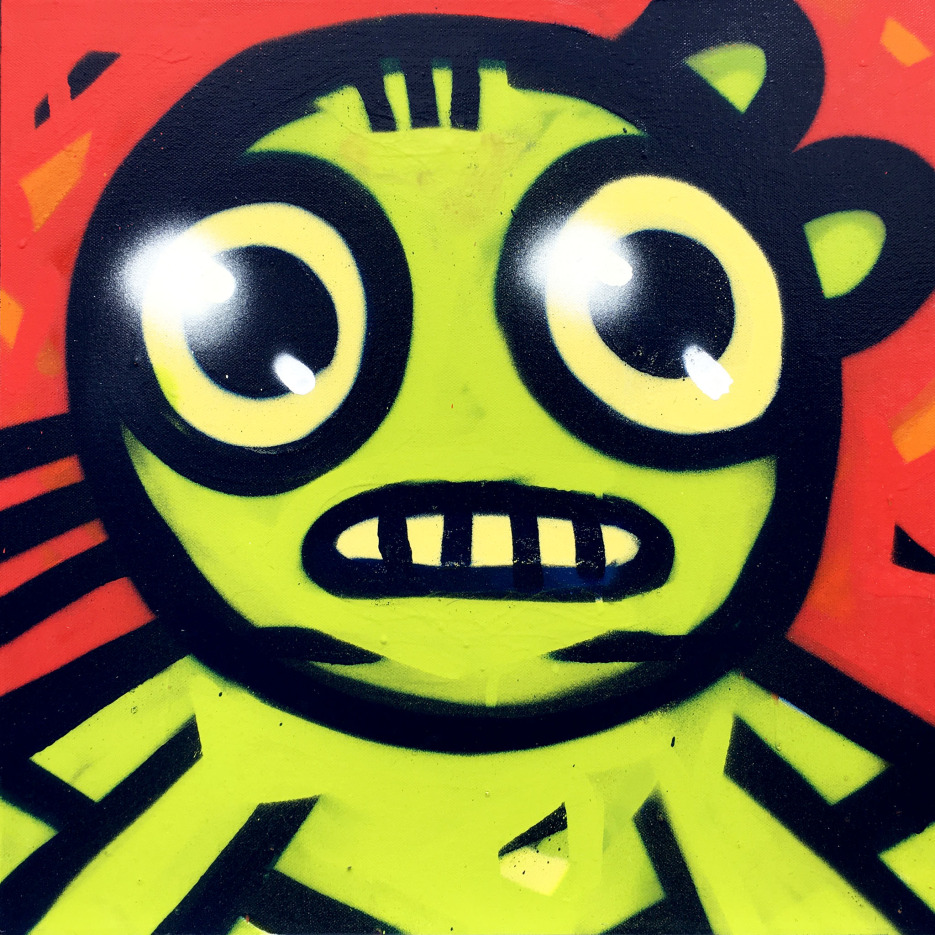 In our online gallery, you can find some of the most atypical pieces made by local artists and living legends that are embedding in their artworks the authentic vibe of street art & graffiti.

This one of a kind canvas recently painted by Pisica Pătrată depicts his cute and loved square cat character, coated in green with a deep, dark blue outline, floating on a red background. Until now, we have never seen a canvas made by Pisica Pătrată using only spray paint. This canvas directly relates to his street art activity and captures his master skills, gained during the past decades of mural painting, art installations and interventions in public space.

The painting, titled “Expression 1 (Expresia 1)”, captures and incorporates Pisica Pătrată‘s wide experience and his personal emotions, transmitted by his main character that appeared in all of his works. Spray paint on a 50 x 50 cm cotton canvas – shop here

In recent years, we have been happy to have several opportunities to collaborate with Pisica Pătrată by creating one of the most beloved murals in Bucharest and a street art installation on the façade of the Capitol Summer Theatre (2008, 2016, 2017). We exhibited some of his astonishing paintings in multiple collective exhibitions at Kube, Lente, Palatul Universul, Romanian Design Week and Imbold Gallery. In the living room and in the urban garden of Lente, you can find the mural made in 2016, within the series Pictăm Pereți, and the wooden totem Un-hidden Bucharest (2017). Also, in collaboration with the Un-hidden Bucharest project, Pisica Pătrată installed 6 wooden panels on the façade of the Cina building, which hosts the M60 Space (2018). At the end of last year (2020) we invited Pisica Pătrată to paint a large canvas during the feeder sound live session with Primărie.

Part of the collection of wooden art toys assembled and painted by Pisica Pătrată are available in the feeder.ro/shop.