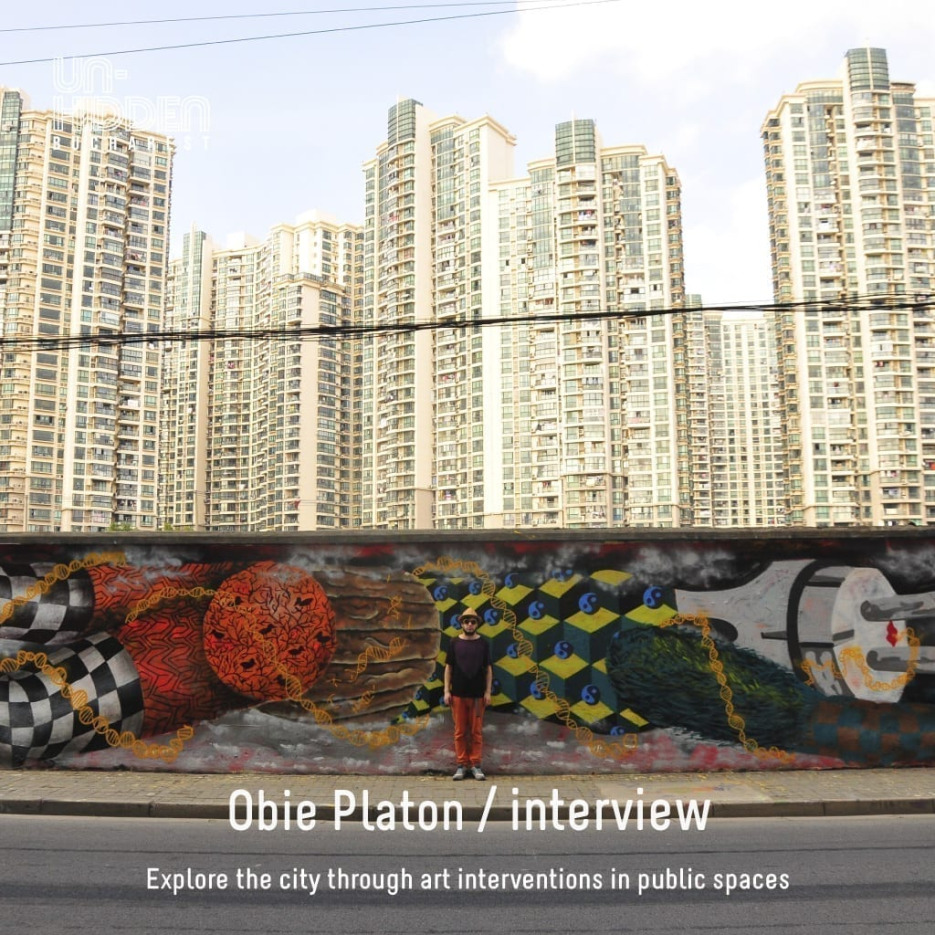 We are reviewing, together with Obie Platon, two decades of graffiti and street art in Romania and beyond its borders, from East to West, where the manifesto approach of art that bears his signature continues to awaken and bring out the viewers from their comfort zone. We talked about China’s world full of contrasts, branding in arts as a result of the sustained passion for creating, perseverance as one of the keys to success, the evolution of art in pace with technology and the touristic potential of urban galleries.

f: Hello, Obie, you started the new year with the presentation of your artistic journey from the last decade, from Europe to Asia, from controversial projects and murals made in different corners of the world, to unprecedented exhibitions – featuring video mapping, installations that reinterpret art history, paintings in motion, etc. What were the most important experiences in these ten years, those that you believe have brought you closer to what you desire as an artist? What are you preparing for the next decade?

Obie Platon: Hello! Twenty years ago I made my first graffiti with the letters “Magic Style”. Graffiti and Bboying have been some of the essential ingredients that have formed me since 1999.

In 2009, with my admission to the Faculty of Architecture, something happened that redirected me – the first large scale mural. There have been many important projects and experiences, each one underpinning my artistic path. Besides, being the first to paint a mural that size, I had overwhelming feedback. So I met people who believed in me, supported me and I thank them.

What I wish as an artist is always happening to me: to be a disciple of the universe. In the next decade, there will be nothing more than a refinement of the inherited diamond. Perseverance is one of the keys to success.

f: Last year in the same period, in Beijing the exhibition-manifesto SATISFASHION was opening, a solo show where you focused on the world of contemporary fashion and its vices, on the false social ideals maintained by social media, photo manipulation and advertising, on consumerism in general. Tell us how the exhibition was received by the audience there and what are your impressions of the art market in China.

Obie Platon: Once I arrived there, I started looking for subjects. It was quite challenging to choose one. China is full of contrasts. Art in China is divided between traditional and external influences.

Satisfashion was born in the urban space, consumerism being very strident, especially in fashion. Since one of the works has been taken out of the exhibition, to avoid potential problems, from the start, it’s a response. Overall, people were delighted; each found him-/herself in the themes approached.

I thank the Embassy of Romania and the Beijing Cultural Institute for their support.

f: Since we’re talking about fashion, among the few places where you make your appearance is at vernissages. You have built up your artistic presence over time. It’s not a new thing in the world of art – Warhol, Picasso, Dalí also stood out from the crowd by their public appearances – the way they looked, how they dressed and how they interacted with people. Today it’s called personal branding. From your perspective, how does this type of branding work in art?

Obie Platon: Every artist chooses what he/she wants to do to stand out. Some artists attract only through fashion and appearances, acting and way of being, public or discreet life, etc. I think these forms of personal branding are a choice; after all the works themselves are the ones that remain whatever you wear or how many crackers you have at work.

It seems essential to me to keep in mind everything that makes one happy. If there is passion, branding comes natural. At exhibition openings, I’m relaxed, I’m going to what I’m attracted to, not to promote myself. If you feel what you do and believe in yourself, no extra effort is needed to find opportunities; they come to you. 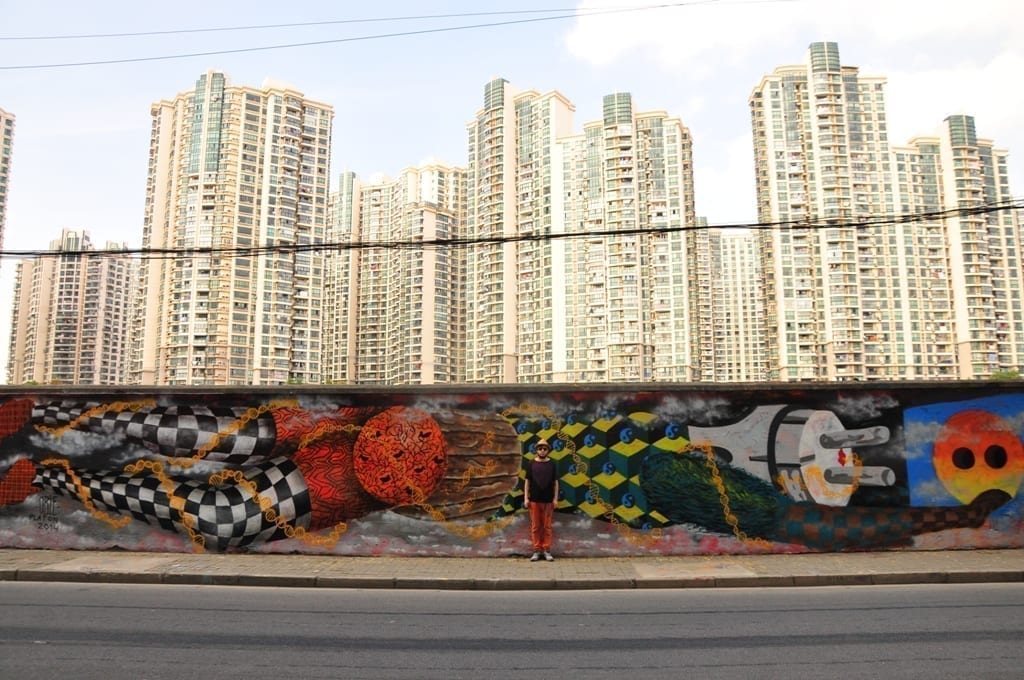 Mural by Obie Platon in Shanghai

f: You have spoken widely in previous interviews about China, where you have been living for many years in parallel with returns to the country for various projects. Will we still find you in Asia in the following period or are you expanding your horizons?

Obie Platon: The “Base” has always been in Bucharest. Projects are everywhere, I continuously get offers. I just have to correlate what I want to convey with the right place.

I do not see myself very soon settled in a fixed place that I can assume as my own. Bucharest has an enormous potential to turn into a tourist spot on the map of street art consumers. Expansion of horizons is on the rise, from East to West… I love the planet.

f: You’ve mentioned many times that you have always tried to be different through your artistic vision and beyond. Through the themes approached, you challenge the minds of people and sometimes get them out of their comfort zone. Do you feel it’s your role as an artist to do so? How do you load your creative batteries lately – what captures your attention, what motivates you, what inspires you?

Obie Platon: As the evolution of technology develops the society every day, new themes emerge. I feel fortunate to be contemporary with this sudden change that has given rise to human subjects and stereotypes, from robots to monsters.

The manifesto approach to art is the one that characterises me. Without mental involvement, it’s all just decorative.

f: Regarding technique, you are mainly known for painting murals and canvases, but you have explored all kinds of intersections between the forms of artistic expression and we know that at one point you wanted to develop your installation work. How does 2019 look from the perspective of artistic experiments – what new techniques do you want to explore indoor and/or in the public space?

Obie Platon: The evolution of technology also determines new approaches to expression. From mechanical and kinetic paintings to rotating sculptures based on magnetism, interactive installations inspired by the science of the body, and so on.

In short, I try to connect people from different professions. By working with them, we come to unpredictable techniques.

One of the challenges this year is to make an exhibition for the blind, with the desire to carry on with what has been done so far, to develop more ways to transmit visually through other senses than sight.

f: Your passion for art started from graffiti, and in your works, we find tributes to the movement, to the people you collaborated with, to those who contributed to the development of this culture in our country, you also made a portrait of ERPS, objects showing graffiti train bombings. How do you feel when you look back at those times that formed you?

Obie Platon: I can only be grateful and proud to be part of the latest trend. Besides, I feel fortunate to be a pioneer alongside them. There’s an indescribable satisfaction to do something that depends only on you.

Murals by Obie Platon in Romania and Europe

f: On the Un-hidden Bucharest map , we included some of your murals and collaborations. What do you believe is missing from the capital’s street art scene? What would you like to do differently in Bucharest from an artistic point of view?

Obie Platon: Mostly it depends on the authorities. If they were really interested in attracting tourists, they could see that all major capitals have urban galleries that regenerate urban space, murals that speak of local identity, that develop some neighbourhoods without previous tourist spots. They managed to create new tourist areas through street art. There are more and more foreigners writing to me personally about this and asking where they can see my work.

f: On Instagram, you have a series of photos titled #flyingportrait. Can you send us such a portrait from where are you now? Also, what place in Bucharest would be fun to take a new photo to complete the series?

This article is part of the Un-hidden Bucharest series of interviews with street art and graffiti artists, published weekly on feeder.ro. Together we will enter their artistic universe and learn how the city can be regenerated through artistic interventions in the public space.