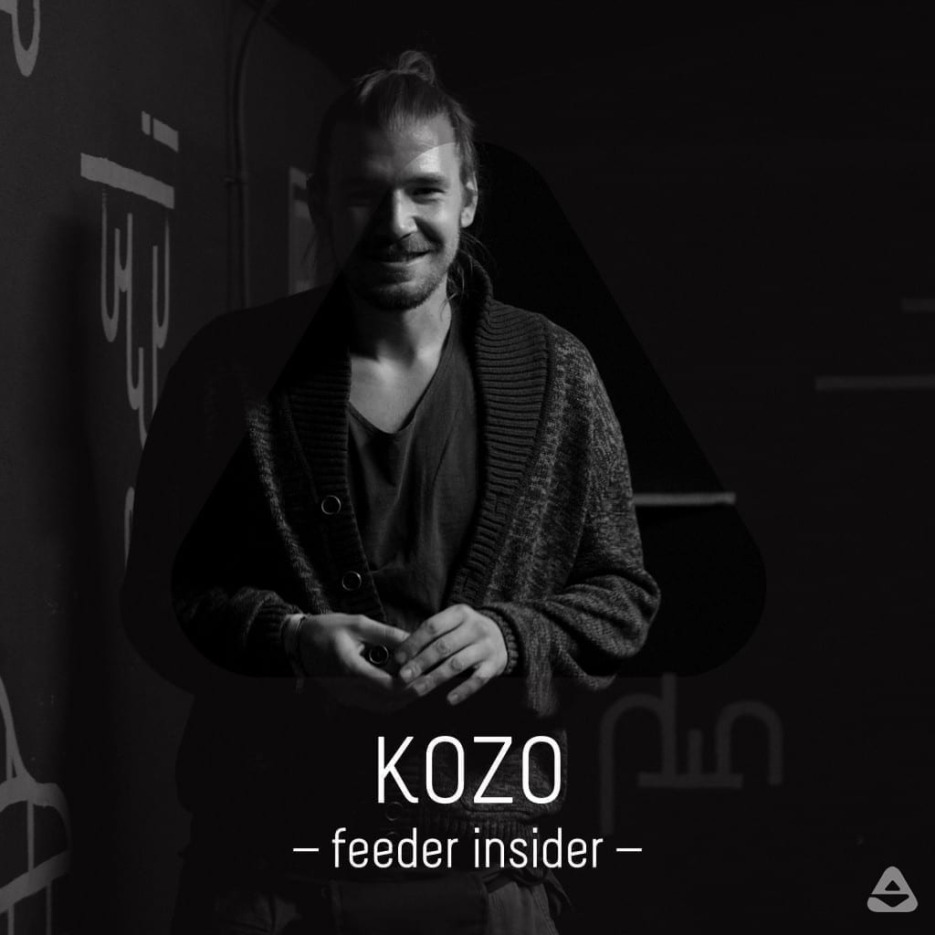 Be it underground festivals or renowned venues around Europe, Kozo’s signature sound has coloured our club experiences for already more than 15 years. Record selector, producer under various aliases (Dr. Kozo or Ooodjkoz), part of the Sahau and AK41 projects or label owner (he runs Understand Records together with Cezar and Praslea), Kozo has been actively reshaping Romania’s electronic underground into totally unexpected forms. A refined take, envisioned in an amazing release for Draganenii records (as Ooodjkoz) and one for his familiar playgrounds, Zimbru Records, as AK41 and Sahau.

So it was about time to find out his 2 cents about this scene, receiving from Kozo a very detailed x-Ray scan of the electronic scene (with a bit of history included): Enjoy!

The app I cannot live without… I haven’t developed it yet
First thing I pack for a festival…
Sometimes I cook… sometimes I order
When I’m thirsty… a nice draft weissbier does the trick
Latest TV series I binged… Narcos
The record that has never left my bag… Maybe “Feelin Sensual Bahia Mix” by Melchior. Not sure though.
If I’d have 1 million euros… I probably would have delayed this interview even longer.
My guilty pleasure… parmiggiano
When I’m bored… I play Hearthstone
3 essential tracks… Minilogue – Bird Song // Cobblestone Jazz – Peace Offering // The Other people place – It’s Your Love

Vixi: Hey Kozo, glad you accepted our invitation to talk. It looks like you had a busy 2017, gigs as well as releases. Do you feel that the underground electronic scene has grown to a more mature point than previous years?

Kozo: I don’t know really. I live in Bucharest which is like Berlin in so many ways. It’s a huge bubble. We only have the underground electronic scene if you really think about it. It has grown in the sense that there seem to be more and more parties every weekend but if you look at the diversity it seems to me that most producers and djs are stuck with these “romanian sounds”.

V: I remember you started DJing just about the same time as Cezar and Herodot. How did you end up in this collective, taking the sinuous road of DJing?

Kozo: I would say that our passion for electronic music brought us together but that’s true only if you look at the bigger picture. Me and Cezar were high school buddies and with Herodot we met through common friends. We loved minimal and tech house at the time and were bedroom DJ’s really happy about playing at our friends birthday parties and so on. Good times.

V: In the early 2000s’ you were involved in the Understand community as a founding member. What was the main goal behind Understand and how, in your opinion, did it shape the Romanian electronic underground, as we know it today?

Kozo: the main goal was bringing Bucharest clubbers together online, this was before facebook, and shortly after another site, nights.ro, did the same thing but in a non-exclusive fashion. We implemented a “face control” because we wanted only the people that were interested in the music, sharing ideas and forging friendships that have lasted long after the forum went offline. In that matter, I think we succeeded. I am not sure the underground can be shaped and if it was shaped we have to credit that to the amazing people that were and still are the soul of those parties, the clubbers, and the amazing DJs that inspired us all the way. Also, the promoters that were lucky enough to love the music, not just the dough.

V: Understand morphed itself into a well-respected label, releasing only a handful of EPs since 2011, limited pressings also. What’s the idea on keeping a small number of records for each release? Shouldn’t music be accessible for a wider audience, even if we talk about the underground? (These limited pressings also encourage huge prices on discogs that don’t even help the artist…)

Kozo: small number compared to what? I think the number is usually just right, and the sad truth is … this is where the vinyl market is today. Rarely can It absorb more than 500 copies of any given EP. And surprisingly the music that sells more is the “buy it today play it tomorrow forget it by next month” kinda music.

We cannot control the prices on discogs because we are not the sellers on discogs and that is the case for any inflated price you see there, it’s not an Understand problem, it’s a general adaptation of “buy for a penny sell for a dime” on an underground platform which is a free market. I don’t want to say it but we all know it’s true: the fact that those buyers exist (that pay 50 bucks for an NM) encourages the sellers to take maximum advantage. Round and round it goes…

V: 8 years between the straight-forward stripped techno sound from the [a:rpia:r] VA back in 2009 and the subtle house details hidden in the carefully crafted loops released under the Ooodjkoz moniker. What changed in your approach towards studio work and what changed in your studio gear in all these years?

Gear-wise my studio changed drastically since 2009 (i could say that my studio back then was just a macbook pro), moreso in the last few years. I have changed also (wa wa wa) but my approach to making music was always derived from the setup I had. Back then I would use the timeline for every track. Nowadays I barely use It at all. Almost everything is a live recording which can be a problem sometimes because you can’t readjust levels but this way the tracks have a different dynamic.

To cut the story short i went from making music only with the computer to using no computer. Nowadays my gear is mostly eurorack with a few synths and drum machines. And, last but not least, I am a man of many names, ooodjkoz is just one of them. Stay tuned.

V: You’re involved in 2 musical projects with Dan Andrei:AK41 and Sahau (where Paul Agripa is involved, too) . What are the most notable sound differences between them?

Kozo: The main difference is Paul Agripa. Me and Andrei have been working for some time now, I am doing drums and sampling he is doing the harmonic part but basically we’re just making music together, the roles are not quite written in stone. So that being said we just program everything into our gear and record the tracks whereas for Sahau we have Paul doing solos live with synths and keys so the sound is a little more musical, more jazzy. Also for Sahau we function as a band in the sense where everyone has his instruments and we just play that.

V: Let’s put some light on the Sahau project, focusing on the live performance. What’s your part in it and how much freedom of artistic expression does it offer comparing to DJing?

Kozo: I don’t think you can or should compare them. I enjoy doing them both although we have only had 2 live performances this year so far, Waha and Sunwaves. We approach our live set just as a jazz band would, we have ideas programmed and we jam them live in a constructive manner. We don’t actually have the tracks that we played for those 2 live acts. So in that regard, I have more freedom than the next guy doing drums and percussion (which is what I do) because I am not supposed to do anything at any time. Since there are no tracks there is no order, there are no scheduled breaks, no scheduled solos. Everything comes naturally. We are good friends so we have a strong connection between us but we are also DJs and I think we have a good feeling for the dancefloor also, which makes the improvising part a little less risky.

V: Every time I danced to your grooves, you managed to transmit that laid back attitude of yours, bringing back smiles on the dance floor around me. Not taking things so seriously (as most underground record selectors do) is part of your life philosophy? Do you plan on achieving this kind of vibe on the dance floor or you just go with the flow?

Kozo: I don’t really know. I haven’t heard this description of myself until now. I think I am serious about having fun when I am playing and making fun of serious people when I’m not. Really, you have to be serious if you’re using the mixer as a musical instrument. If you use it as an appliance like most underground selectors do you will just be playing some tracks.

V: Feeder is still in Kozopolitan’s blogroll. We enjoyed Kozo as a blogger a few years ago. Why did you stop updating it and why did you stop the amazing Futere Sound podcast?

Kozo: The thought that someone could find me funny and witty and in the same time be laughing when reading TimesNewRoman really made me sick. On top of that I was getting too famous for my own good 😉 Futere has not stopped. Futere will never stop. Futere is just futere.

V: What’s your most powerful drive in continuing to improve yourself as a DJ and record selector?

Kozo: The feeling you have after a good party (as a clubber or as a dj) has to be the driving force. You can’t top that and you know … appetite comes with eating 🙂

I’ve been loving music all my life and I always loved Lego and shit like that so when you combine those you get a DJ 9 times out of ten. So, to finish in a controversial manner I do consider myself a fine selector but that doesn’t automatically make me a DJ. I think there are more skills involved in being a DJ than just playing good records.