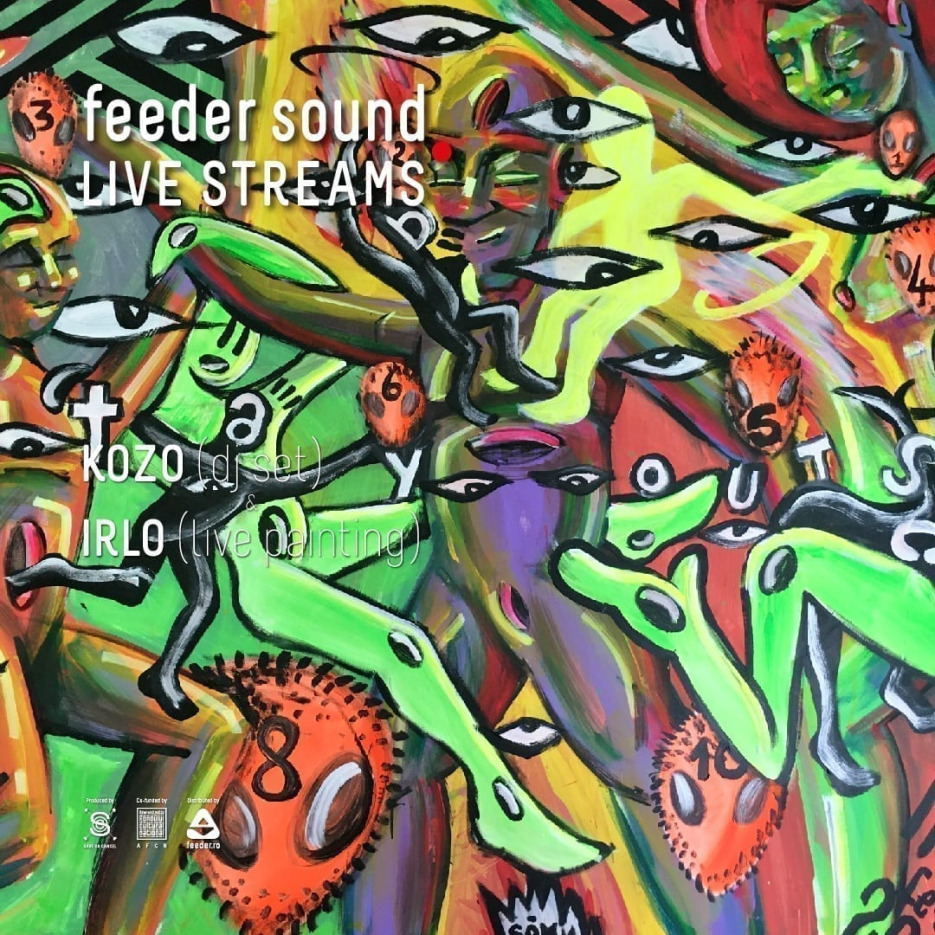 On May 21st, we had the pleasure to welcome KOZO & IRLO to feeder sound LIVE STREAMS. The two pioneers from the underground electronic music scene and graffiti movement are both living legends in their fields. Their endless contributions influenced young generations to discover the passion for music and art.

Get hypnotized by Kozo‘s vinyl set, that will keep you inspired from the beginning until the end, with smooth and precise transitions. The intriguing selection is very carefully assembled, resulting in a masterpiece set. During the two hours mix, Kozo played rare records from Matthew Dear, Petre Inspirescu, Quizz that cover a wide variety of shades and colour of the electronic music. We are pleased to invite you to listen to the entire set recorded at high quality.

If you are interested in painting, street art and graffiti, this video that captures Irlo painting a large canvas can work as an online tutorial. Irlo started to prepare the canvas in his studio and applied the first layers of paint a few days before the live. The entire video is an open door to Irlo‘s imagination and the way he is creating a visual story. During the live painting session, Irlo worked super fast. His technique implies using multiple coatings, a huge variety of contrasting colours and a few brushes. You can see how Irlo approaches the canvas with acrylics, unveiling with each brushstroke hidden parts of the story and a new possible interpretation of the painting.

“The work captures a ritual dance in which entities of different natures take part. People, angels, demons, and animals rejoice together to be able to spend time and space outside architecture.” – Irlo

Kozo is a Romanian artist that lives and works in Bucharest. With an intense activity spanning for more than 15 years, he is one of the main figures that shape the local underground music scene, raising it to an international level. He is co-founder of the renowned imprint Understand alongside Cezar and Praslea, that brought to light more than 100 highly collectable vinyl records. Selector and producer, Kozo works under various aliases, releasing a series of amazing EPs. As Ooodjkoz he released for Draganenii records, as Backstage Boys (alongside Dan Andrei & Andrei Ciubuc) for Pressure Traxx. On Zimbru Records he released two EPs as Sahau (alongside Paul Agripa & Dan Andrei, and AK41 (alongside Dan Andrei). Recently, he (re)joined forces with Andrei Ciubuc, creating the group Eu și cu ăsta to release Social Distancing LP. His discography also includes a collaboration with Melliflow imprint.

On a rare occasion, we had the chance to publish an extended feeder insider interview with Kozo. Here you can listen to the feeder sound episode 53 mixed by Kozo.

Irlo is one of the pioneers of the local street art/graffiti scene, and his works have a huge visual impact, efficiently and skillfully addressing complex themes that he reinterprets in his style. Irlo uses bright and vibrant colours, defined by clear and sharp lines that often describe characters and events that begin with everyday life and go through a multitude of surreal states and directions. The result makes some observers very happy, while others are taken entirely out of their comfort zone, precisely what art has to do when it is exposed to the public.

Recently, we published an article about his exhibition titled “Ceci n’est pas une exposition” and some photos capturing his latest mural in Bucharest made together with Kero, acting as NOM Crew. The image combines the numerous stories about the illegal deforestation in Romania mixed up with fragments from Snow White and the Seven Dwarfs, Sleeping beauty.

Over the years, we had the pleasure to work with Irlo on several occasions. We exhibited one of his astonishing paintings in multiple collective exhibitions at Kube, Lente and Palatul Universul. In 2017 we invited Irlo to take part in the “Pictăm pereți” project, by painting a mural at Lente. You can discover out more about Irlo by reading the feeder insider interview. Or you can buy the Un-hidden Street Art in Romania book, where you can find a distinguished selection of murals made by Irlo in Bucharest, Brașov, Cluj, Iași, Timișora, Constanța, Vama Veche and the list goes on. Take a virtual tour on the digital version of the Un-hidden Street Art in Romania map, and get ready to explore Irlo‘s artistic interventions in public space.

Here you can discover the feeder sound LIVE STREAMS line up & time table. We kindly invite you to join us for the upcoming episode with CR15TINA (dj set) & AEUL (live painting).