digitizARTE.ro | the educational and self-publishing platform for young artists – an atypical and essential cultural product 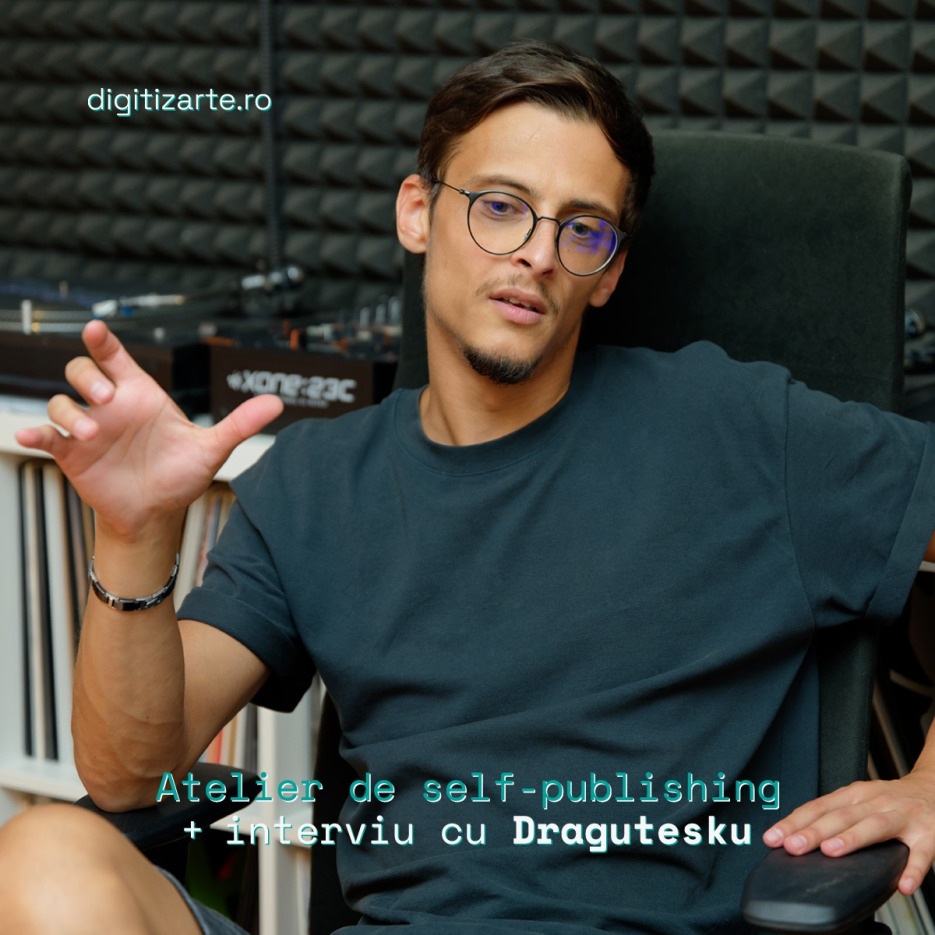 digitizARTE.ro | the educational and self-publishing platform for young artists – an atypical and essential cultural product

Young creatives – designers, architects, illustrators, graphic designers, visual artists and musicians – can now make their debut with the possibility of self-publishing on the online interactive platform digitizArte.ro. Participants from Romania, Italy and Portugal responded to the website’s open call for emerging artists – local talent supported to reach international audiences. The platform will then award prizes to eight self-published articles in the creative fields. digitizArte also supports the entrants with an educational programme consisting of five online workshops and a guide for young creatives. The first such virtual workshop features Dragutesku as a guest and is aimed at independent musicians. The series launches in early September, and readers will regularly find new things and workshops on the website.

“We want to make this new platform known to young creatives, as a space where both artists and promoters can publish their artistic materials,” say Cristina Popa and Andrei Racovițan, creators of the digitizArte programme, “- be it music, design, architecture, illustration, graphics or fine arts. Those with different skills should know that they can participate in the open call. The workshops we are organising, which anyone can attended on the website, are aimed at tutoring those who want to use the platform to publish online, supporting them in presenting their work to the public.”

WHAT? In short, digitizArte is an online platform consisting of 5 courses, a gallery with the winning works of the open call and a guide.

The website is an interactive online debut and self-publishing platform for young creatives (artists, designers, architects, illustrators, graphic designers and musicians). It continues the work Save or Cancel has been doing for over 12 years to discover, promote and connect local talent with international audiences. The digitizArte project proposes three directions of action, an atypical series of cultural products:

1) an educational programme, in September-October, consisting of five online workshops and a guide for young creatives that informs about the internet’s ability to connect authors with global audiences through new methods of digitising work and publishing online, facilitating artistic production and exhibition of work in the virtual environment in a sustainable way;

3) an open call for emerging artists, rewarding eight self-published articles in the creative fields, with audience participation alongside the Save or Cancel team and partners in the selection and judging process.

For WHO? The project is aimed at those who use the self-publishing services provided by the project platform and who participated in the open call, together with readers of the digital guide, who will update and improve their online publishing skills. Visitors to the website will be able to access content published by artists within the project and read articles covering topics related to the arts supported by the platform.

HOW? By combining the exhibition space with the virtual space, the platform will foster dialogue, debut. As a resource accessible anytime, anywhere, it will contribute to the constant education of the public and artists, through interconnection and multidisciplinary activities.

Each workshop organized by digitizArte consists of several modules and quizzes. In addition, each workshop will present a case study with a local artist in the form of a video interview. The guide will result from these courses. These workshops and the guide are useful for those who want to publish on digitizArte or, in general, online.

WHY? This project creates the conditions for the continuous education and participation of young creatives in a sustainable and replicable online environment to learn new communication and representation skills for their professional activity. Furthermore, the platform aims to activate new audiences and create recurrence among visitors to cultivate the habit of appreciating music, art, design, illustration, and graphics in everyday life.

“The local and international artists we interact with use social media, but we’ve noticed that many of them would like to have their own space to showcase their portfolio,” say Cristina and Andrei, the creators of the programme. “In this sense, the digitizArte platform brings artists the opportunity to exhibit their work and, at the same time, invites them to deepen their knowledge and learn new skills useful in online self-publishing, maybe even create their website.”

Dragutesku, guest of a case study on how he uses the internet to connect with his audiences

Dragutesku will be present at the first virtual workshop for developing digital skills aimed at independent musicians. The course consists of three modules and can already be attended on the digitizArte.ro website.

In the platform interview, Dragutesku talks about the types of content created for social media and the tools used in the process, from hashtag selection, the benefits of publishing a long article versus a short one to organising the content plan, promotion, performance ratings, or the future of self-publishing online.

The case study – interview with Dragutesku can be watched here. [youtu.be/WrCszgW2g1g]

And the full workshop here. [digitizarte.ro/course/atelier-virtual-i/].

“Do everything out of passion, never have expectations,” the guest tells young people starting out in music. “That way, a possible disappointment disappears. And work obsessively hard. In time, the results will follow. “

Drăguț Adrian, aka Dragutesku, is a discreet artist and prolific composer who lets the sounds of electronic music speak for him and the DRG Series record label manager.

Over the past years, Dragutesku has been the author of numerous records released by local and international labels such as Fapte Records, feeder sound, Tupiar Records, Masivarium, Perception Dub, Otomoji, Minim Records, Modeight, Parama, Raw Crafted Wax, Unic. As a DJ and performer, his work materialises in appearances on stages in Romania, UK, Serbia, Armenia, Russia, and Israel.

Talking about the stages a material goes through before release and how he conceives, produces and promotes his albums, Dragutesku says this can be quite a long process, where steps are taken with patience and dedication: “For the album, of course, I contacted all the platforms I know and have collaborated with, from Trommel, Meoko, even feeder. Then I made a plan. For example, every two weeks, a premiere […]. On the album, I really think we did premiere releases for all the songs.”

The artist’s personal involvement is also present on the promotion side. For example, he says, “I usually did the covers from pictures I took. From where I’ve been, from my experiences.”

About his current professional moment, Dragutesku says: “I would like to work both on digital and vinyl in the future. Vinyl, alone, kind of limits you to a category of people who only buy plates.”

Project produced by Save or Cancel

The program does not necessarily represent the position of the National Cultural Fund Administration. Furthermore, AFCN is not responsible for the content of the project or the way the program results can be used. These are entirely the responsibility of the beneficiary of the funding.

Since 2009, Save or Cancel has been a medium for the communication and propagation of arts and culture, promoting and facilitating their role in contemporary society. Save or Cancel’s self-initiated multidisciplinary programs aim to identify sustainable and adaptable opportunities to (re)enhance the existing through cultural and publishing projects and programs.

Proiect produs de Save or Cancel

Despre Save or Cancel

5 thoughts on “digitizARTE.ro | the educational and self-publishing platform for young artists – an atypical and essential cultural product”