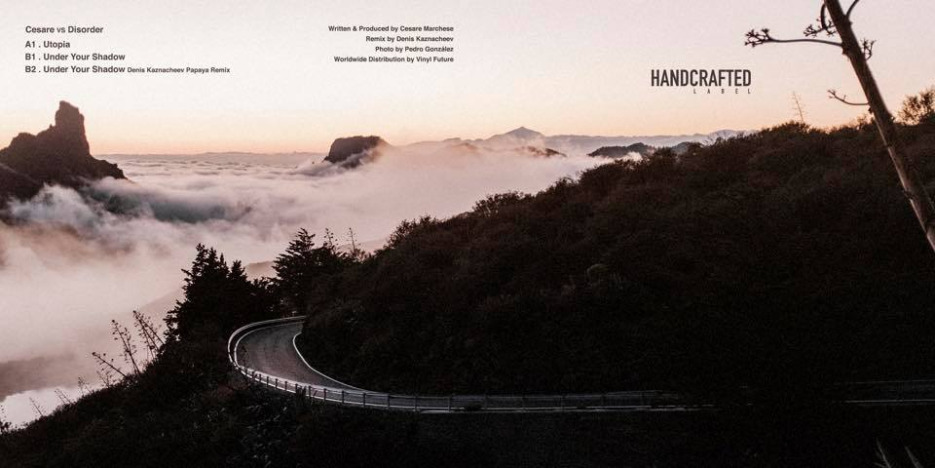 Nazt‘s Handcrafted label has been responsible for some well-received records over the past few years, with Alexkid, Carlos Sanchez, Javier Carballo, Priku and Melodie among the globally-renowned names who’ve graced the imprint. Based in Gran Canaria, the label’s raison d’être tends to lean toward an accomplished sounding house and techno hues, so it’s no surprise that Cesare vs Disorder is another who’s already featured for the label. The label’s latest sees the Italy-born, Brazil-based producer conjure up a stunning release courtesy of Utopia. Delicate and imbued with more than a smidgen of magic, it serves up a fascinating insight into the mind of a musician whose work continues to be defined by its eclectic tropes.

It’s the title track that gets us underway. An emotive record that tugs at the heartstrings in the best way possible, it’s never lacking in drama and is notable for its many floating melodies and whimsical vibes. A beautiful example of the soul that often pervades deep house records, this is music made with an impressive level of thought and care.

‘Under Your Shadow’ sees the producer hark back to more minimal-inspired planes, with its trippy aesthetic, popping beats and unlikely baseline coming together with a consummate ease that separates this one from the herd. Fascinating and engaging, it too traverses down a deep path, with the end result one that manages to pair up to the original’s brilliance. Which of course, is no mean feat.

Culminating the release is Arma 17 resident Denis Kaznacheev, who interprets ‘Under Your Shadow’ in his own inimitable manner. Renowned as one of Russia’s foremost clubs, Kaznacheev has played a pertinent role in the club’s rise to global prominence, with this release reminding us just why it’s earned a reputation as one of the world’s best after-hours spots. An unusual but captivating track with an unpredictable demeanour, it closes the release amongst a barrage of oddball vibes.

Grab your copy of Utopia EP from deejay.de