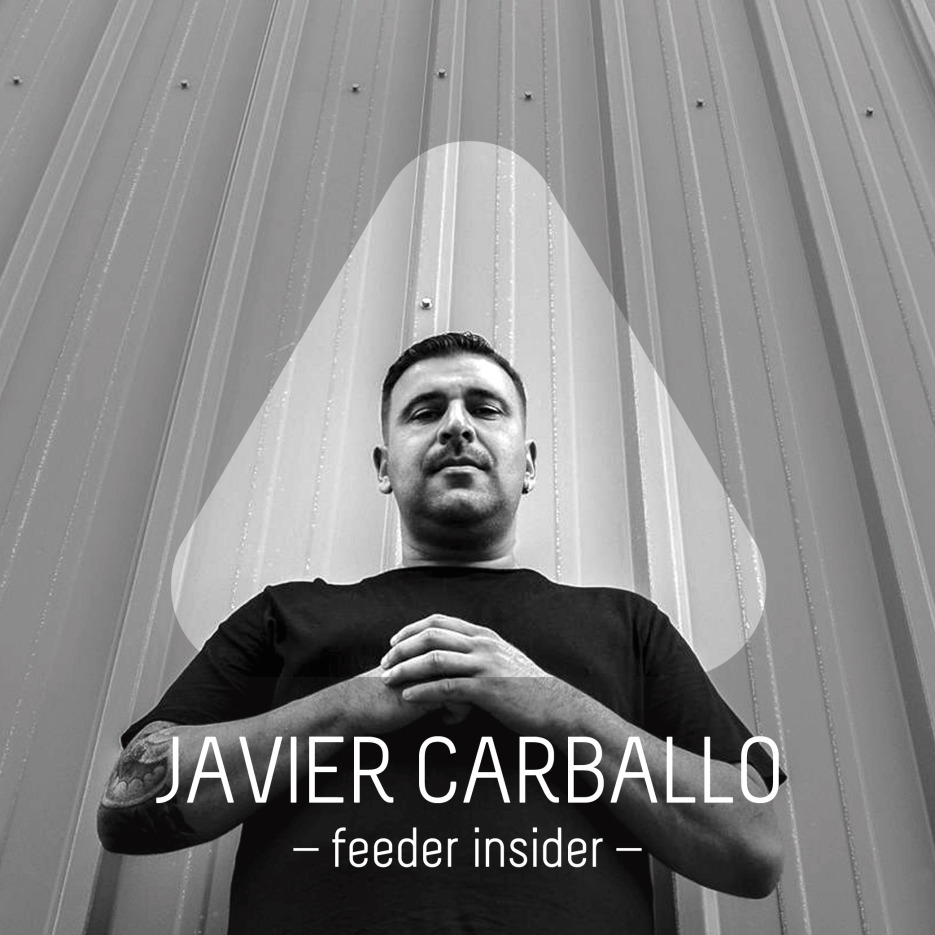 As a son of the generous sun of the Canary Islands, it’s no wonder that Javier Carballo has gained a reputation for his warm and vibrant style that defines his sound, deep enough to make a Sunwaves Festival morning memorable yet powerful to control the techno hungry crowds from Fabric, Cocoon or Watergate. His vision about the house & techno scene has found a home on labels like District, Raw, One Records, La Vie En Rose, under his own name or various aliases, like the Lowwax & Terms (together with his good friend Berna) as the debut EP for his own label, Underyourseat a release that feeder.ro has reviewed a few months ago.
Now part of Hector’s Vatos Locos crew, Javier Carballo steps up to the next level of his already prodigious career: a fresh double vinyl named Silver Smile, to be released at VL Recordings in January 2018 (pre-order)!

When I want to chill out… I go to the beach
My mom always said… please take a Jacket
A proper party needs… Music
Sometimes I get nostalgic about… Family
One of the best gifts from a friend… a record
The last app I checked on my phone… Instagram
I like animals… I prefer plants
Some underground venues… CDV, Mood Club
A snack I can’t refuse… Crisps
3 artists I love… Michael Jackson, Villalobos, Mathew Herbert Vixi: Hello, Javier, we’re happy to talk to you in the feeder insider series. You were born in the sunny Canary Islands, where you started to DJ and moved to Berlin for quite some time. Why did you trade your home on the island for the colder Berlin?

Javier Carballo: Hello, well the only reason I moved to Berlin was to be close to the Berlin Music Scene, this allowed me to learn new sounds and growing as an artist. At the moment, I’m living in London for the same reason.

Vixi: What got you into music and what inspires you to go on?

Javier Carballo: Since I was a child, I have always loved music, listening to my father’s records, radio etc. I started listening to electronic music when I was 10 years old, it was introduced to me by my cousin. He had some DJ friends, and I don’t know exactly when the moment was, but when I heard them I got obsessed with electronic music.

After that, I couldn’t stop listening or dancing.

Over the next few years, my love for electronic music grew and at the age of 14, I was mixing my first house and techno records. At the moment, I can’t imagine my life without music. Vixi: How does the Vatos Locos constantly evolve into such dynamic expressions? What makes the connection between you as a crew work so well?

Javier Carballo: Vatos Locos is a new but solid platform, we are a heterogeneous group of artists and that’s the main reason for our success and our special vibe. We always try to support each other and share our ideas and our way of feeling the music.

Vixi: How much planning goes into your Under Your Seat parties? What are your favourite perks of establishing a regular night?

Javier Carballo: After 10 years, Underyourseat became a solid brand. Originally, we started out just doing a few club nights, but now we are a serious promoter company, behind some of the biggest projects in Gran Canaria. We run around 10 events per year, I’d like to say thanks for the important work of my partner, Berna, who offers brilliant support and is an amazing DJ. Vixi: Tribal rhythms rooted in pure techno, crisp percussions and a techy groove that spreads on 2 records make up for your next release, Silver Smile, on VL Recordings. What are the key elements that link up all the tracks from this EP?

Javier Carballo: All tracks on this EP were made with Vatos Locos in mind, that’s the connection between them. They were done at the same time with the same idea and feeling, not just 8 random tracks.
You can find peak time tracks, after party tracks, Deep, minimal or techno. I really did this work without pressure, just going with the flow.

Vixi: It’s delightful to premiere Reborn 4416 on feeder sound, thank you. Is there a story behind the track’s name? At what point during a DJ set do you think Reborn 4416 will have the most powerful effect on the dance floor?

Javier Carballo: I did feel reborn after a difficult situation in my life and the music helped me to feel alive again, as always. That’s why the track is named this way. I think “Reborn” is perfect for the early hours at an after party.

Vixi: Let’s go a bit deeper into Javier’s creative flow. What is the main gear you use in your studio setup and how long does it take you to transform a simple idea into a tune ready to be released into the underground?

Javier Carballo: Ok I’m working with some hardware and software with Logic Audio. In my productions, you can hear my: Nord Lead, Korg Monologue, Roland Tr09, Machine and Mpc 2500.

Of course, depending on my mood and my inspiration, sometimes I only need a day to finish a track, other times it can take ages.

Vixi: You’ve played all over Europe, from London’s Fabric to Romania’s Sunwaves, and this year’s edition inspired you to perform for 12 long hours. Is there a different vibe on the Romanian dance floor comparing to some other places you played?

Javier Carballo: Of course, every place has something different, but in Mamaia, I could feel that the people who were on the dancefloor were just enjoying the trip with the artist. They really know how to do it, everyone is under pressure at Sunwaves. That’s amazing.

Vixi: With you, the feeder insider series reaches 127 interviews. What do you think is the present role of online media for artists and their audiences?

Javier Carballo: In modern times, I think the broadcasting of our art is really important, and online media allow us to show our music and what we are doing to all parts of the world. People can be updated with new artists, new sounds, new parties and new initiatives.

It is a new way to communicate and socialize.