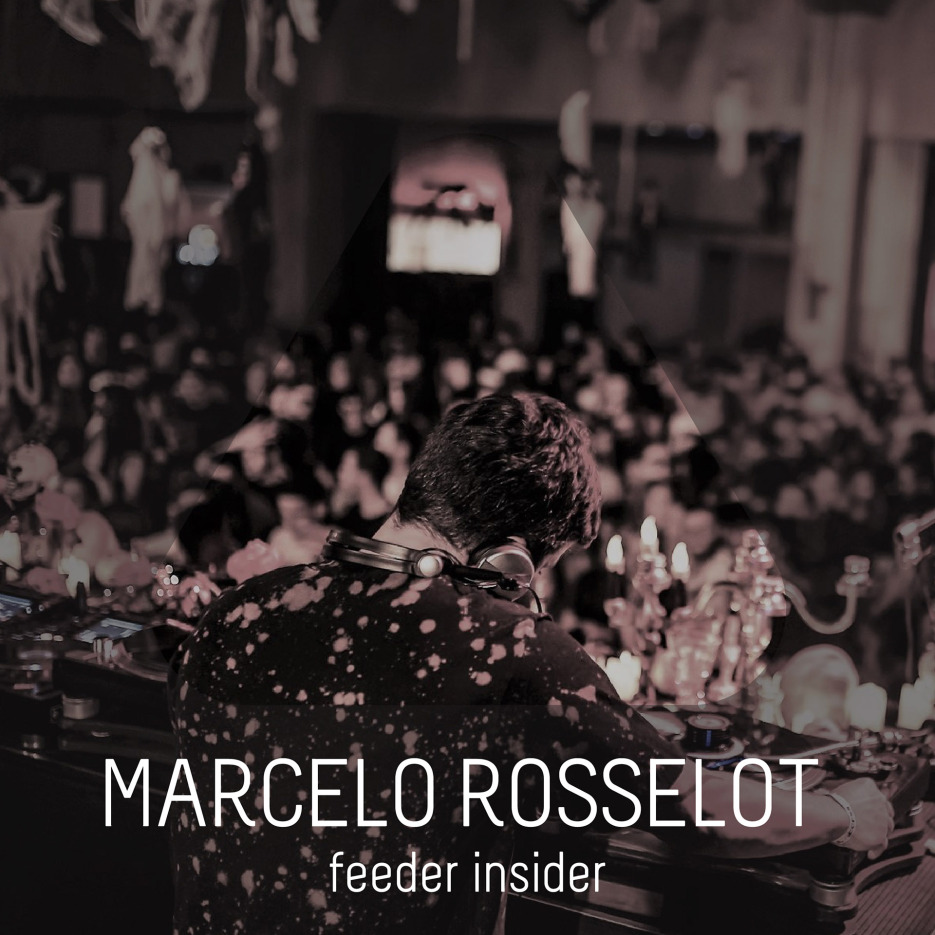 It is a pleasure to have Marcelo Rosselot as our guest for this extended interview, part of the feeder insider series. He is active for a long time on the underground electronic music in Chile and on the international scene, so we‘ll start with the present, and we‘ll go back in time to find out what motivated him to keep making music.

feeder.ro: Hello, Marcelo! Soon, you will release 3 amazing tracks at the Italian label 21th Street Records, founded by Entoniu & Agape. You titled this EP, Eruption, and we are curious if you want to share the experience during the days you produced these tracks, and what is the connection between the title and the vibe of the final arrangements?

Marcelo Rosselot: It was back in 2015 when the Colbuco volcano erupted in Chile; it was far from where I’m based, but it was all over the news; I was constantly seeing the images of the volcano and the dark fumes. Despite all this, in Chile, we are used to these types of natural events such as earthquakes, and we have learned to live with them; thus, the vibe of the track conveys all the darkness that this eruption involved and how all of this is also part of life.

f: How did the collaboration with Tom Clark go for the remix? In which ways do you feel his vision augments the track?

MR: As a Dj, I have known Tom’s work for a long time; I enjoyed the sound of his label High Grade and releases like In the Cage from Morris Audio. So, I contacted him at the end of 2014 to see if he liked the tracks and was willing to work on the remix of El Viaje; it turned out great and was ready since then.

He contributes a unique trippy-underground sound to the track, considering it a rare gem within the current music offering.

f: When producing music, do you use specific methods to transfer your ideas and emotions into sound?

MR: Not really; I don’t know exactly what happens when I start working in the studio, but I know I’ll do something in a certain line of music, for example, something with a 303 sound or a dub track, so I try to go into that direction.

f: The changes and challenges brought on by the pandemic have impacted all, including the cultural sectors. How did you handle and adapt to all the fluctuations during these uncertain times?

MR: I guess like all my musician, dj and producer friends. We have had to adapt ourselves to these Covid times, it’s not easy to stop doing what you love or enjoy doing for a living, but fortunately, I have other businesses, so I try to focus on them. I never stopped Djing or producing since I have all of the equipment and my studio at home. I lost track of how many lockdowns we have had in Santiago; we are currently in the middle of one. We always have music playing at home, both my sons have grown up this way, I am constantly playing new sets in my booth in our apartment, they play the piano, the guitar, hang out at my studio, and my oldest son even took the time to build a studio of his own in his bedroom last year. Despite all the bad things brought by the Coronavirus,

music-wise, it has been an opportunity for doing the things we never had time to do before. Of course, I miss clubs and crowds, and once they reopen, I believe there will be many interesting new things to listen to.

f: It’s been almost two decades since your musical journey begins, and we were curious to find out what motivates you and keep your attention focused on music, sound, producing and DJing?

MR: Music is an essential part of my life; I have always been listening to music, not only electronic, new wave and industrial was a huge part of my teen years. My children now show me the music they like, and though I am not a huge fan of it, I find interesting sounds that inspire me. And yes, it’s been almost two decades; it’s part of my life.

f: Having such a long musical career, we imagine that you have noticed the evolution of electronic music from an underground phenomenon to a phenomenon that tends to become mainstream. What do you think are the elements of a good track, which you often return to for its timeless character?

MR: I have seen how it has gone from underground to the mainstream as in many other artistic expressions. However, I started Djing because I loved music and not for the money, I got paid for it, and it was great, but the aim is still the same, so I am not moved by what is trendy or what can be sold to the mainstream audience. When I produce, I look for sounds that can be enjoyed both at the clubs and at home or while doing other things.

f: The WASB (2014) documentary takes viewers on a trip to the beginnings of Chilean electronic music. In the film, you talk about the great number of DJs in Chile who move abroad, as they cannot make a living with music in the country. How has this situation evolved over the years, and can a DJ make a living playing music in Chile?

MR: You can try to live as a Dj here in Chile, but here it’s not the same as Europe, we are 16 million inhabitants here, and we are literally located at the end of the world.

For 4 years, I travelled to Europe during the summer playing in different countries; I was able to take a 1-hour flight and play in almost any country in Europe; each country has a lot of clubs, so when you have some releases, and you are Dj & producer, and some of your tracks are played in clubs of the world you need to play in as many countries as you can.

The fees in Europe are also very different compared to Chile or South America, that’s why a lot of Chilean Djs-producers go to Germany, Spain etc.

f: You and Entoniu & Agape know each other since 2009 when they were running a podcast series. Why do you think some friendships built around music have a really long life? What fuels your connection?

MR: Music is universal, and when you have similar tastes in music, especially when it is not so common, that connects you with other people even when you haven’t met them in person. Being able to exchange opinions in terms of music with people from other backgrounds and based in such different places is very fulfilling, and it makes you build friendships that last for years.

f: In 2007, together with Francisco Allendes, you launched Andes Music, the first vinyl label in Chile, whose output is remarkable. In 2015, you partnered with Oscar Mendoza to give the label a fresh twist. What are your plans for Andes and what are some criteria that you take into account when selecting artists’ productions?

MR: Yes, with Francisco, we started the label around 14 years ago, lots of good memories, but then he moved to Ibiza and embarked on other projects, so we talked about it, and I took over the label and decided to go for an even more underground approach. Oscar Mendoza, a Chilean friend who lives in Copenhagen, shares his musical interests with me, so we partnered up and released an album produced by Alexi Delano and myself, Espacio Profundo EP, this marked a new stage at Andes, our objective is to release in vinyl and some months after in digital format. We focus on minimal-techno, Dub-techno, Acid & classic sounds, so that is the music we want to hear from our artists.

f: As restrictions are gradually lifted throughout the world, some places and events are starting to re-open. Where are you playing in the months ahead?

MR: The situation is still very uncertain in this part of the world as we start to winter. As soon as restrictions are lifted, and it becomes safe to travel, I plan to take vacations in Peru and get some gigs there in Lima; I travelled to play in some gigs about 5 times pre-Covid, and it was always good gigs and then in the north of Peru, maybe Mancora and others places in that area. My kids and my wife love Mancora as well.

f: Thank you Marcelo for your inspiring answers.

Eruption EP produced by Marcelo Rosselot and released by 21th Street Records is out today exclusively on Beatport.