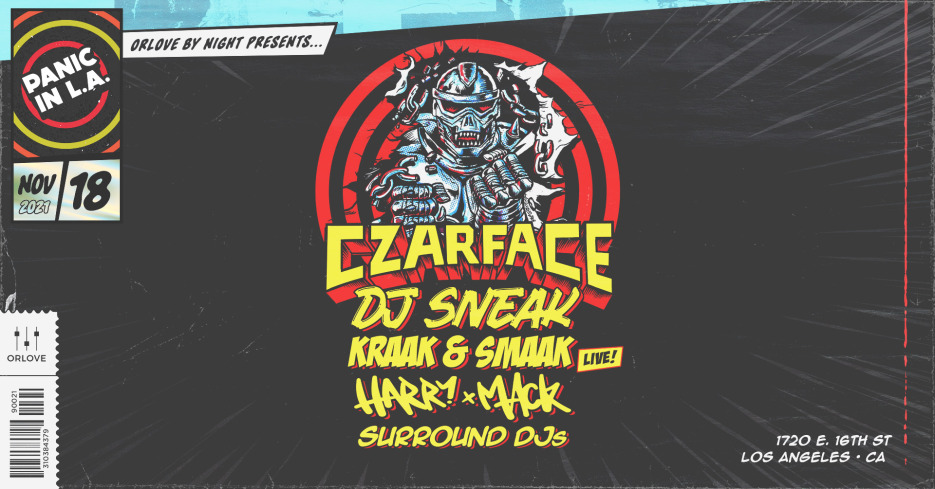 ORLOVE’s genre-bending party is back at 1720 with its most diverse and eclectic lineup yet!

Tickets are available now at https://bit.ly/3yf1YRp

Acclaimed dance music brand ORLOVE knows how to throw a proper party and this one is set to be one of LA’s most brilliantly varied in some time. It plays out at the awe-inspiring 1720, a multi-purpose venue in Downtown Los Angeles’ Warehouse District. It boasts best-in-class production, as well as plenty of craft cocktails and beer and a world-class sound system that will be put through its paces by some of the best DJs in the game.    The mouthwatering lineup includes hip-hop supergroup Czarface (featuring Wu-Tang Clan‘s legendary Inspectah Deck), 7L and Esoteric. Also on the bill is the Chicago legend and House Gangster DJ Sneak, who plays no-frills, straight-up house with real attitude. Meanwhile, more cutting-edge house and techno comes from Dutch live electronic trio Kraak & Smaak, and joining them is freestyle superstar Harry Mack, as well as LA-based DJ and production crew Surround DJs aka Heidi Lawden, Jeniluv and Masha.

Panic in L.A. is the hip hop arm of the ORLOVE brand and in the past, it has hosted beat-making royalty such as DJ Premier, Raekwon, Sango, Pomo, Mix Master Mike, Craze and Giraffage. In hibernation for a few years, it returned this past August with the epic pairing of Rakim and DJ Jazzy Jeff, who performed on stage together for the first time in history. Each Panic event to date has been a memorable throw down with next-level light and sound and incredible energy from the crowd.   Panic in LA parties always go off — and this one will be no different.