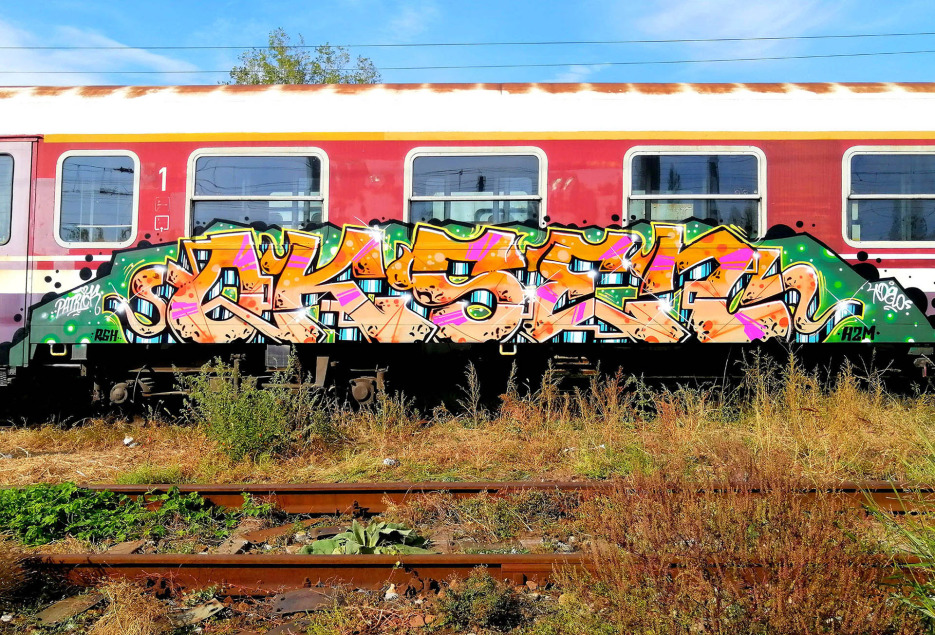 Oksen, aka Nesk, is a Romanian graffiti writer, part of the active crews called RSH (Really Sick Habits) & H2M (Hard to manage). Nesk has a deep connection with the underground graffiti scene for more than two decades. He painted in Bucharest, Cluj, Timișoara, Vama Veche and many other cities around Romania and Europe.

For creative artists like Nesk, who like spending time creating their complex piece composed of different types of letters, textures, patterns, and characters, freight trains and walls are a good option, but mainly he prefers trains & subways.

From a personal perspective, graffiti can work as a tool for self-knowledge. To find a distinctive style, graffiti artists like Nesk are doing many sketches and research in typefaces, calligraphy, visual arts and design. Although he is doing only a few letters (Nesk or Oksen), repeating the same process for long periods, he perfected his writing style. Nesk can adapt his style to the medium he is going to paint on. Sometimes, he invests a lot of time doing super detailed artworks, but he can also paint fast.

You can buy these authentic canvases and a fragment of the local graffiti history, at an affordable price for any collector, only on feeder.ro. SHOP HERE

At the beginning of the year, Nesk started to draw a series of artworks depicting the local graffiti legends that greatly impacted the scene. Until now, the edition features the most prominent writers Erps, Mser, Viper & Hust.

You can find a very limited series of posters (digital print) signed and numbered by ERPS & MSER. SHOP HERE

4 thoughts on “Spotlight on Romanian graffiti writer Oksen aka Nesk”