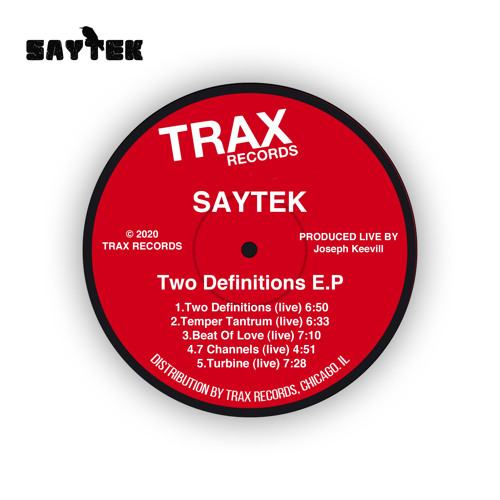 “One of the Uk’s freshest and most exciting acts, All the music Written & produced by the man himself Amazing” – Carl Cox

Over the past few years, UK artist, Saytek (aka Joseph Keevill) has carved himself a reputation as one of the electronic music scene’s most innovative live acts with his impressive improvised shows.
Described by Cox as “Absolute Genius when it comes to live” a sentiment echoed by his fans and across the industry.

To date, Saytek has released eight esteemed live albums, Live Jam tracks, EPs and 12” singles, on his own Cubism imprint as well labels such as Awesome Soundwave (Carl Cox’s new home for live artists), KMS, Trax, Superfreq, Liebe*Detail, Soma, Bedrock, fabric, My Favorite Robot Records, Wiggle and many more.
His raw improvised tracks have become the weapons of choice for the most respected DJs in the world across the spectrum of underground music. In an industry of smoke & mirrors, ghostwriters and fake DJs, integrity goes a long way and Saytek is what many consider a true electronic musician, sticking strongly to his beliefs and core values.

His busy tour schedule has seen him booked for peak time live performances at some of the best parties and festivals around the world. Highlights include Awakenings, Creamfields, Resistance, Shoom , Space Ibiza (RIP), Printworks, Mysteryland, and fabric London.
Saytek also performs regularly at the heart of Berlin’s underground scene with shows at Tresor, Watergate, Sisyphos’s Hammerhalle and last year he was invited to perform at the legendary Love Parade founder, Dr Motte’s Birthday at Suicide Circus.

Whilst his Facebook live streams continue to rack up millions of views, along with winning much regular support in the media from the likes Mixmag (album of the month), DJ Mag (Nominated best live act) and more, in 2019 Saytek was voted as one of the top 20 live acts in Faze Magazine by the German public and also held his place in the top 50 Techno Artists again on Traxsource (2016-2019).