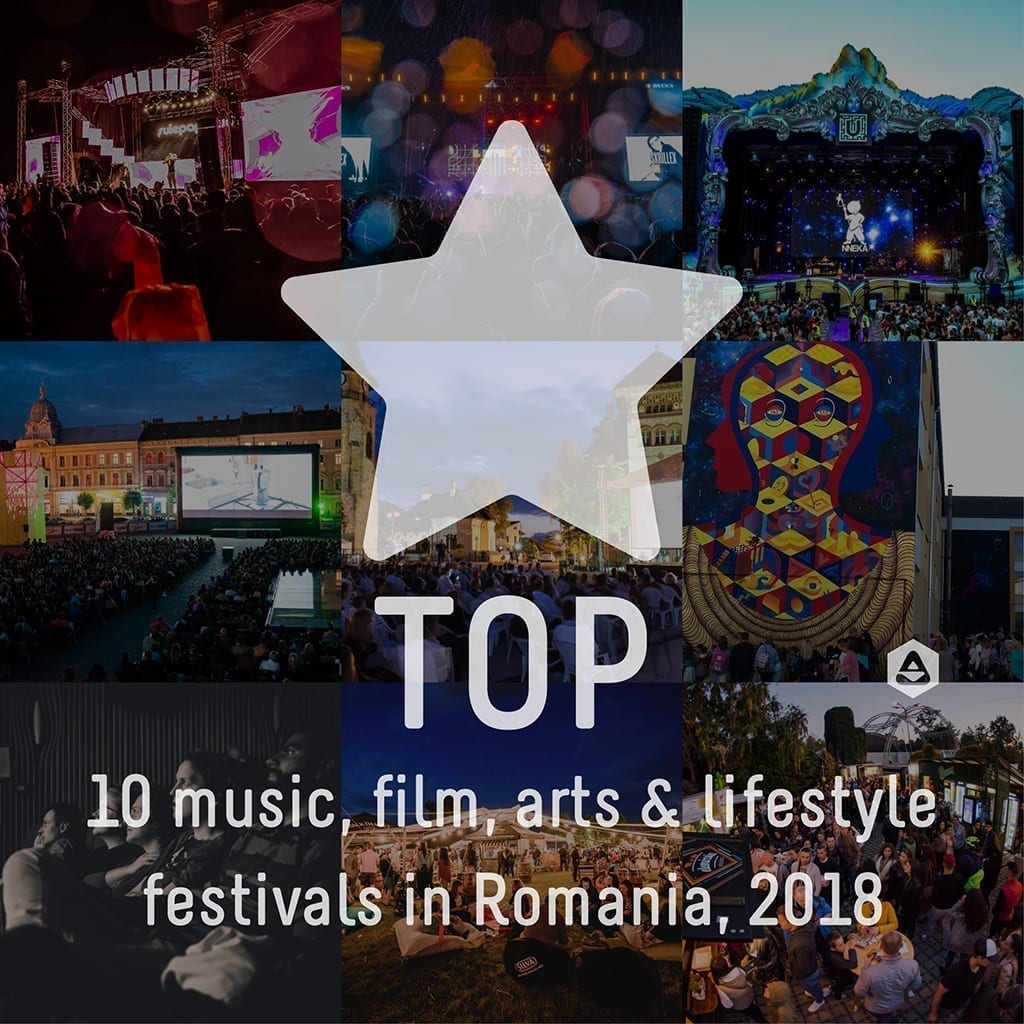 We’ve asked you to help us discover together what are the most exciting festivals in Romania, 2018.

Scroll down and enjoy the results. ⚡ Did you get your tickets?

We were more than 75,000 happy people at the first edition, and we wanna be even more in 2018. Get ready to party for 4 days, with good music, tasty food, amazing art and lots of daily activities. Start your summer in Iasi, Romania! 2nd lineup announcement (in alphabetical order) here.

We’re happy to see Francesca Lombardo on that list.

3 Smoked Olives Island Festival is a new adventure every time! It is located on the Danube River, away from the busy life of the city, right on the border between Romania and Bulgaria, more precisely, near the ferry crossing point Calarasi (RO) – Silistra (BG), an hour away from Bucharest.

A festival like a holiday: read about feeder’s fun experiences in 2017 and 2016.

From the people who brought you The Untold Festival comes Neversea, the largest music festival ever to be held on a beach in Romania. Neversea is a 3 days and 3 nights-long international celebration of music, lifestyle and seaside adventures, the biggest summer festival ever to be held on the Romanian seashore. Neversea blends world-class musical performances with unique magical entertainment and promotes the diversity of music and the notion that we are all connected by the love of dance, our hope for a better future and the sea itself. We dance forever!

Get ready for Jazz in the Park 2018! 11 days of live music with international and Romanian bands: this is the proposal from the 6th edition of the Jazz in the Park Festival, which will take place in Cluj, June 21st – July 1st, 2018. We have announced the first bands confirmed for the 2018 edition: Fanfare Ciocârlia, Moonlight Breakfast, A-C Leonte, JazzyBIT, Antal Gabor Trio. We are preparing dozens of concerts in the park, on the Somes Riverbank and in concert venues. The mysterious forest, the smooth hillside, the trippy twilights, the starry nights, the cows, the shepherd, the happy people, the smiles and laughter, the bass, the dance, the love, these are few of the main forces that we all play with to create the Waha Experience.

Film lovers can start working on their must-see lists for TIFF 2018. The 17th edition of the Transilvania International Film Festival comes back to Cluj between May 25 and June 3. The first ten films confirmed for the year come from Venice and San Sebastian. The only Animation Film Festival in Romania. Starting with the festival’s fourth edition (2009), anim’est has also included a unique event in the Romanian festival circuit: Creepy Animation Night – a night full of provocative, bizarre and horror animation shorts screenings accompanied by a live musical act in the festival’s main venue – Patria Cinema.

NORDIC FILM FESTIVAL (#NordicFF) celebrates the culture and cinema of the Nordic countries with four days of screenings in the most beautiful cinema to be found in the city. With a selection of 10 feature films, 4 documentaries and a short film compilation, this winter #NordicFF brings the stories of Nordic filmmakers to the heart of Bucharest.

Documentaries, action and animation films  – all dedicated to the environment. Competitive sections, workshops, debates and open-air concerts, everything just across the Danube.

Call For Entries 2018: Pelicam International Film Festival on Environment and People invite film directors, producers and distributors to register their films in one of the four competitions of the festival. Submissions for the 2018 edition of the festival start on 31st October 2017 and will be open until the 15th of March 2018, and the selected films will be screened in Tulcea between the 21st and 24th of June, when we gather on the banks of the Danube to see the best and newest films in the world dedicated to the environment.

Pelicam International Film Festival on Environment and People is part of the Green Film Network, a network of 40 environmental film festivals from all over the world. GFN Award is awarded to one of the films proposed by the festivals belonging to the network. The 11th edition of the International Human Rights and Documentary Festival will take place between March 16th and 25th 2018in Bucharest. Throughout the 10 days, human rights will be headliners in cinemas and around, in CinemaPRO, cinemas Eforie, Union, Elvire Popesco, Peasant’s Museum Cinema, ARCUB, Rezidența BRD Scena 9 and the National Contemporary Art Museum. The central hub of the One World Romania 11 festival will be set up in ARCUB Gabroveni, where plenty more side events will take place, alongside the screenings scheduled for the Great Hall. Having as a motto “Art Wants Out On The Street“, Sibiu International Street ART Festival aims to promote street art and everything related to it and contribute, with works by valuable artists, to raise the aesthetic level of the city, as well as to improving the desolate aspect of less-favoured areas.

With a rich experience, Bucharest Photofest continues due to our belief that such a project must and can intermediate the meeting between artists from different parts of photography and all enthusiasts in love with photography art, in general. We showed that Bucharest can be such a place of meeting, because here, as in major cities worldwide, photography has an important place in people’s lives. 2018 theme: nature. Focus: Iceland

The White Night of the Art Galleries, the project initiated and organized by Ephemair Associtation extends its night programme in art galleries, alternative spaces, creative hubs and cultural institutions in other nine cities across the country.

18 – 27 May 2018
Staged every year in May, Romanian Design Week is a 10 days festival that promotes design as a pad for cultural, social and economic growth.

By promoting interesting ideas, energy and dynamism, vibrant exhibitions and extraordinary collaborations, RDW shows that Romanian design is so much more than what you can see at a first look. Events and showcases focus on product and industrial design, furniture, graphics, fashion, architecture and interior design. Besides the curated formats of the Main exhibition, the range of themes is also extended and transmitted by our partners, which host and organize connected events.

Romanian Design Week sees itself as a festival for and of the public and our aim is to make design accessible to a broad-based public. 30.000 design aficionados visited, each year, our main exhibition and the galleries, design studios and collateral events that were part of the RDW program.

Closing the streets for cars and opening them to the talented women who dedicate themselves to the arts. That would be the festival in a nutshell. They expose the feminine universe in all its diversity. Fashion shows, concerts, live visuals on walls, open-air cinema, and street theater – you can find it all. Someş Delivery is an independent project that challenges and tests community ideas for the integration of Somes in the life of Cluj-Napoca. Thinking in the long run, it addresses each year another segment of the river, which it investigates from a multidisciplinary perspective. The project team: Alexa Băcanu, Dan Burzo, Ana Felvinczi, Adriana Măgerușan, Mihai Mateiu, Raluca Mărginaș, Marius Cătălin Moga, Corina Știrbu, Șerban Țigănaș.

We had a great time at the 2017 edition, where Save or Cancel produced the Capitol Grădina Cinema installation.

Finger-licking festival with lots of good food and music, BurgerFest is at its fourth edition.

Street Food Festival debuted in Cluj in 2016, and in 2017 they expanded to 9 cities, where more than a half million gourmands enjoyed #streetfood. Live music, open-air cinema, childrens’ activities and the super friendly atmosphere are on the menu.

The Carnival is an excellent fusion of live music, gastronomy and entertainment, as well as the reunion of major festival brands (Gourmet Festival, Food Truck Festival, Funk Rock Hotel). The festival introduces a unique mix of tastes from over 10 international cuisines – Japanese, Indian, American, Mediterranean, French, German, Balkan, Romanian and many others – in an atmosphere of urban rhythms and ethnic influences. See feeder’s 10 recommendations for Bucharest Street Food Carnival 2017.

Photos by Alex Iacob, the authors