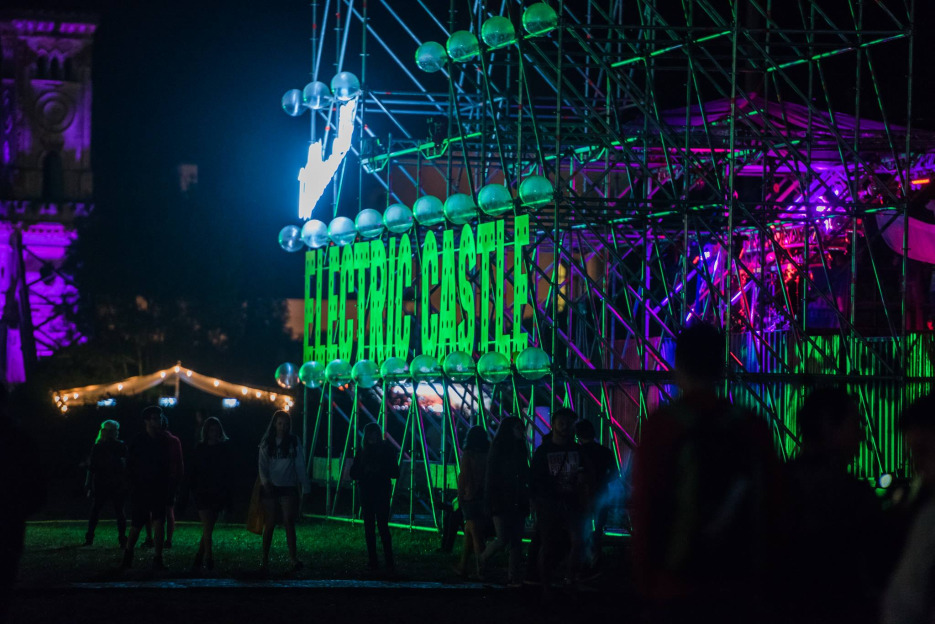 There’s nothing like the feeling of looming in the presence of a festival where its energy is primary, rather than the abundance of artists and an immersive line-up. The allure of partaking in a fabled festival was my main motive to travel nearly 2000 km to Bontida, straight into the heart of Transylvania, where the likes of Skrillex, Bring Me The Horizon or Paul Kalkbrenner took centre stage by stipulating a heartwarming soundtrack for those partaking at Electric Castle Festival.

The festival greeted me with the sun in the sky and dusty roads ahead of the Electric Castle gate. The entrance glazed through white canvases that were waiting for the slight wind to appear. This being my second encounter with the festival, I have faced a pleasing and mature expansion. The amount of vast estate the festival conferred right out the gate emphasized maturity and its desire to become one of the leading festivals in Europe. All this preparation and hope for good weather was quickly put to rest as the first drops of rain appeared on Friday evening, with the festival in full swing.

As rain took over the festival the idea of “We are the people” really came into being. Nobody fled the festival and surprisingly people poured in into the festival as abundant as the rain itself. On the outskirts, the festival spirit really kicked in. Garbage bags were sold as rain protection, people started sharing the small amount of shed from rain and stories and laughter were roaming the streets of the dim and once quiet village. Reaching a common denominator, attendees adjusted accordingly. Equipped with rubber boots, cloaks of rain and plastic bags facilitated to cover up any remaining uncovered spots. It became clear now that rain would only be a flick of the wind and the entire energy and attention would be devoted to regaining that Electric feel. As dust settled over the festival a Mad Max like allure settled through the puddles and mud. Electric “Fashion” or how people called the waterproof improvisation would substitute the sand scarfs and be prevalent for the rain.

Musical-wise, the festival could satisfy and please any tacky hipster desires of any genre as long as it roamed around the field of electronic music, and even further. Reggae and Dub don Congo Natty caught onto his ancestries as he closed the Roots stage on Sunday evening whilst the stage was in a Zen-like mood with hammocks and bean bags around its premises. Alternative and Indie would suffice the early afternoon just to get a mood going as the Boiler Stage opened up to many high-profile homegrown artists such as Coma, Argatu or DJ Sauce & K-lu which fit the script for the alternative and homebound vibe of the stage.

The Red Bull Music Academy stage is exactly what the sponsors of the stage entail. Boundary-pushing music from dance music juggernauts such as Legowelt, Gui Boratto, Pan-Pot and much more. An arsenal of stacked Funktion Ones accompanied the mysterious visual mapping on the façade of the old Banffy, all in a symphonic unison throughout the nights. On the flipside, the Booha Mansion was nothing like any of the stages. It resembled a frat house party, a ragger, which lasted for the course of the entire festival. A squared like a structure of empty massive containers and wooden pallets would “house” an ongoing debauchery. With local and new talent, all in an easygoing and friendly atmosphere, the morning after parties served as a piece of heaven within the muddy madness within the festival. To bring everything together, the Main Stage served as a cocktail of sounds, most of the international and highly acclaimed artists. Even if it was hip-hop from Dilated People, dubstep from the likes of Rusko or Skrillex to metal from Bring Me the Horizon and alternative, electronica and everything in between from the likes of Sigur Ros, Slow Magic or Elliphant or god knows what music Enter Shikari played that night. Electric people went out of their way and crushed the puddles of mud before them only to dance hours on end. The festival organizers took on the task of teaching and preaching about anything tangible to the music and the ideal they were projecting and of course, something for the young adults to enjoy in a festive manner. Workshops, a fashion corner, a tech area, a thrill-seeking area of airbag jumping and a delightful area with vast cuisine were all on the daytime activities menu. So a cold morning shower as your hangover cure and several orange juices later and you were more likely to roam the festival during the day through the puddles equipped with the ever-present electric fashion.

“We are the People”, is the official slogan of Electric Castle. Cheesy at first, but once I saw and experienced how for the course of four days, people plundered into the festival ready to face the rain and the mud, only to grasp onto the alluring energy of Electric Castle. All in all, the festival has it all. A sick location, slick and smooth organization, non-music related activities and of course good and quality music for every taste. It has grown beyond proportion in the last 2 years and I m sure it will grow even more, as long as the rain doesn’t interfere anymore.