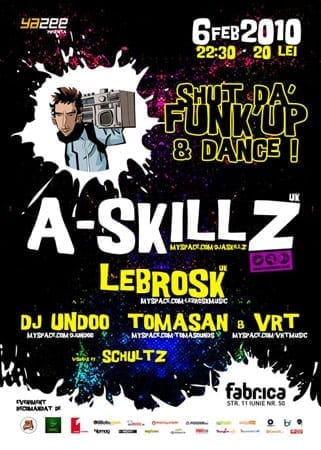 Record label owner, producer and DJ extraordinaire, A.Skillz¹ incredible deck talents fuse funk, soul and hip-hop with D’n’B, dub-step and breaks, all sliced, mashed and cut together with a unique style of scratching and mixing. His reputation as a true party rocker has won him prime-time slots across the world at a Œwho¹s who¹ of major events, festivals and music industry parties including FabricLive (London), The Hit Factory (New York), WMC (Miami), Shambhala (Canada) and Field Day (Sydney).

As a producer A.Skillz has established himself as one of the most highly regarded in his scene, releasing countless bullets, including the infamous Insane Bangers series, a host of impressive remixes for the likes of stadium rockers Queen and Northern Soul Groovers Smoove & Turrell, together with singles on the legendary Finger Lickin¹ Records and the now classic artist album ŒTricka Technology¹ with breakbeat heavyweight Krafty Kuts.

Alongside his globetrotting tours and hectic studio time, A.Skillz pulls the strings at the fresh and exciting new electro soul label Jam City. Structured on the foundations of the music he loves and with it¹s first release ‘The CB’s – Misdemeanour’ unleashed and causing a stir, Jam City is a towering prospect built to house the finest in party rockin¹, road blockin¹ beats.

Lebrosk’s love for all things funky started back in the early 90’s when he found himself listening to the likes of Fatboy Slim, Bentley Rhythm Ace, Cut La Roc and The Freestylers. Following the Big Beat / Breakbeat scene over the years helped land him a partnership and residency with Headspin Promotions setting the dancefloor on fire with Funky Breaks, House and Hip Hop! These days, you can catch Lebrosk spinning anywhere from trendy bars in and around London & Brighton, boat parties on the river Thames and not forgetting those infamous North London warehouse parties where he has the crowds dancing til the sun comes up!

With support from Nick Thayer, Tim Beatvandal, DJ Badboe and Ursula 1000, Lebrosk has conjured up a number of bootlegs and mashups which regularly get played out in clubs and bars all over the world. Lebrosk has also had mixes aired on NSB Radio shows, Quincy Joint’z Lime Sorbet Show and catch Lebrosk’s monthly Ramp FM radio show, the ‘Funk Sessions’ on http://www.rampfm.com. Having recently played alongside A-Skillz at We Funk! in Bucharest, Lebrosk finds himself back in Romania again this Autumn playing the Baraka festival.