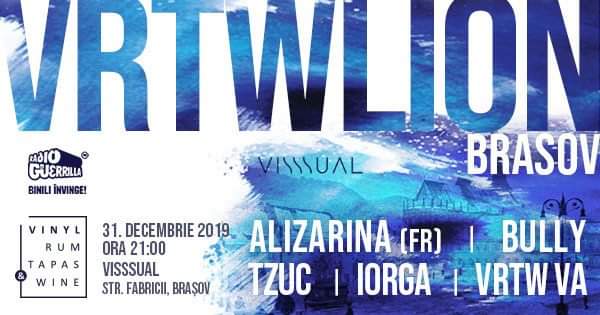 Join us in Brasov, one of our favourite destinations of all time, as we get friendly, tipsy and dance the night away in our first ever VRTWLION!

You already know #vrtw is all about the music, and we’ve prepared a lineup that takes us ’round-the-world with lots of Soul, Funk, Disco, Hip Hop, World Music and a hint of Electro, all spiced up with Alizarina’s Clarinet.

A limited number of 300 tickets will be available

Dăfud Dudes Food Truck will be on-site to satisfy our appetite with their yummy burgers.

Alizarina
From a techno kick to a melody on the clarinet, Alizarina (Global Hybrid Records) oscillates between multiple influences: Klezmer, Tsiganes, Arab and even some Classical Music notes, coming from his childhood musical background.
Resulting from his many travels and a tireless curiosity, Alizarina’s music has got real hypnotic power. It settles in your body, whirls in your head, and might ultimately be one with your inner self. Alizarina experiments a brand new music matter.
His live set, with the charming clarinet and the intoxicating machines, will make you lose control. Sensitive, subtle and poetic, this alchemist offers you an outstretched hand to his world.
Jump in… the trip is worthwile!
www.vrtw.life/artist/alizarina-live-clarinet-dj-set

Bully
Bully is one of the Romanian DJs that has successfully created a bridge between the underground and mainstream. Starting out around 2000, he conquered the dancefloors of literally all relevant clubs in the country. He likes to create diverse musical experiences for his public through a hyped-up mix of different genres, from funky breaks & old school hip hop to breakbeat & drum’n’bass and also local spices in terms of folk and… who knows what next?
He shared the stage with international names like Adam Freeland, Qbert, Deekline, Freestylers, Patrice, Dreadzone, Andy Smith, Ollie Teeba (Herbaliser), DJ MK (Roots Manuva), General Levy, Killa Kella, JFB, Ed 209, Kid Fresh & Ra K, J – Bass, Joe Le Groove, DJAZ, Africa Islam, JourneyMan Psycho – Freud, Subfocus, Technical Itch, DJ Ink, Temper D, Darko Stepic, C4C and many others; working with virtually all relevant DJs in Romania as well.
Since 2002 he was also a frequent choice for sports-related events. Regardless of the season, he managed to hype the riders to the limit within memorable events.
www.vrtw.life/artist/bully-dj-set/

TZUC
TZUC studied piano and guitar at an early age and was introduced to DJing around 2009. The same year, he was invited to play at a dub & roots venue held in an abandoned warehouse in Bucharest. Since then, he became a regular at local parties and festivals, and also hosted a radio show on Groove On, a local platform meant to connect local DJs and music lovers.
His years of digging and experience have created in TZUC a versatility that has grown steadily, making him a serious selector able to understand the crowd and provide heavy dancing with pure emotion.
www.vrtw.life/artist/tzuc-dj-set

IORGA
Selector, Collector, Editor.
Based in Bucharest, IORGA delivers mighty worldwide sound whenever he performs. And while it’s known that Romanians love to party, less is known how much they like to disco-funk party! When he’s not digging, listening or performing, IORGA will either be producing or out on his bike, in search of a beer #vrtw Tropical, Disco, Afro & Funk + obscure Romanian disco edits, straight from Obor market! #obordiscofunk
www.vrtw.life/artists/iorga