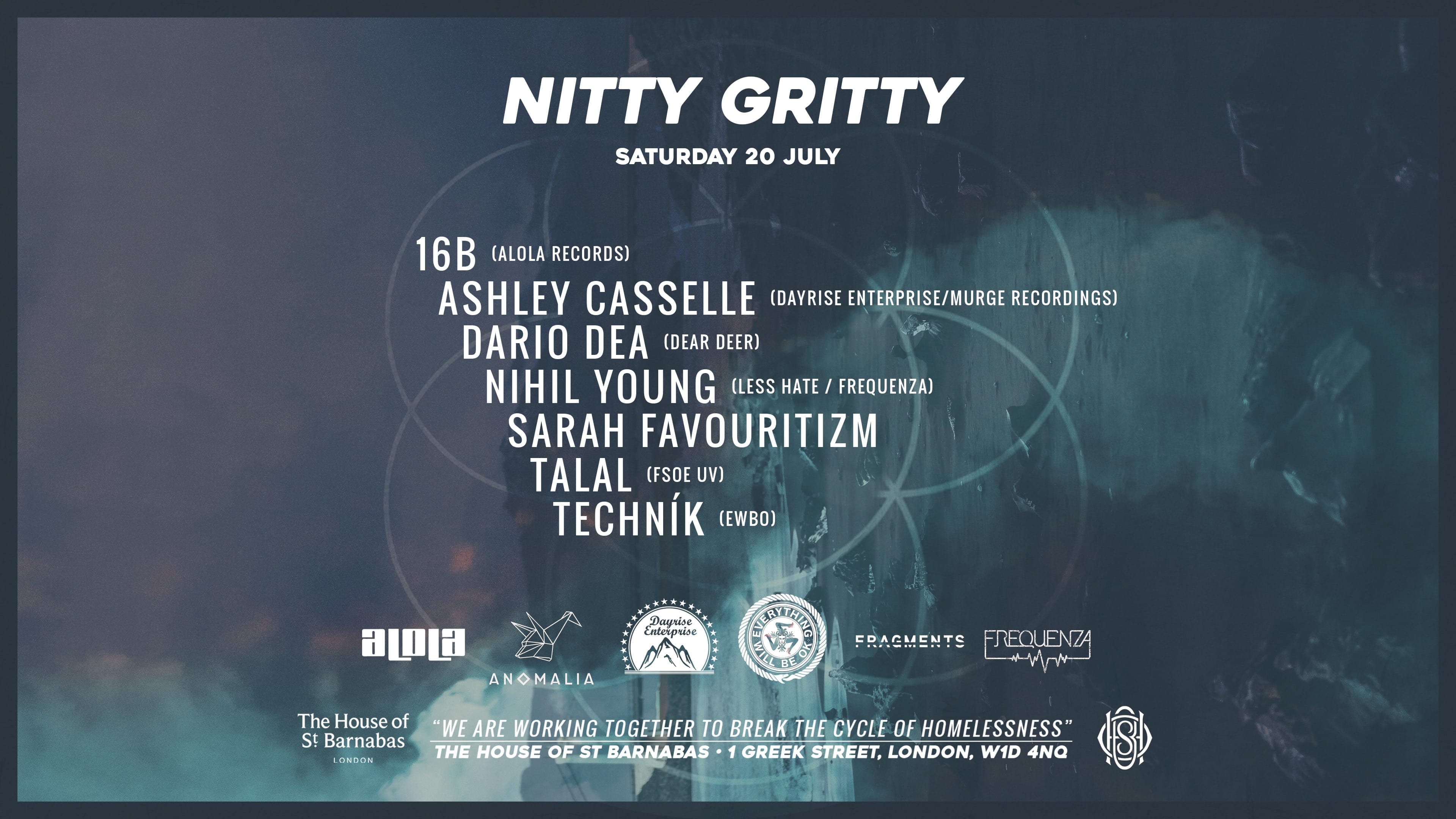 Nitty Gritty All Dayer @House Of St Barnabas, London
Nitty Gritty
All Dayer :: Saturday July 20th 2019
The House Of St Barnabas, 1 Greek St Soho Square, London.
Free Entry (with guest list only – visit https://tinyurl.com/NittyGrittyEventbrite
2pm – 2am
Line-up
16B (aLOLa Records)
Ashley Casselle (Dayrise Enterprise / Murge Recordings)
Dario Dea (Deer Deer)
Nihil Young (Frequenza)
Sarah Favouritizm (Vanni & Fav)
Talal (FSOE UV)
Techník (EWBO)
Nitty Gritty is a brand new event put together by a collective of DJ friends, Talal (FSOE UV), Nihil Young (Frequenza Records) and Sarah Favouritizm, who will be bringing some of the World’s finest underground Techno and Electronica talent to perform at their very intimate party, smack bang in the heart of London Town. The first event will be a special all dayer on July 20th, held at The House Of St Barnabas in Soho, where you can groove from day to night in this beautiful venue, complete with garden, whilst sampling their delicious cocktails. Bar proceeds will go to this incredible charity who work to help get the homeless off the streets and encourage them back into work.
Nitty Gritty’s residents are London based Dj / producer Talal, whose incredible sets have graced the likes of Robot Hearts Further Future Festival in Nevada and Cream at Amnesia Ibiza, among others. Italian DJ, artist and Frequenza Records boss, Nihil Young, who has released over two thousand tracks on his own imprints, along with his own productions on labels such as Spinnin, Get Physical, Ultra, Toolroom, Freakin909, KMS and more. DJ / producer Sarah Favouritizm, one half of production duo Vanni & Fav, who has also been running Favouritizm publicity company and Record label, along with 20 years of international DJ experience under her belt.
Joining the guys on the line up are special guests including producer legend and aLoLa label boss 16B – regarded as a pioneer of the tech house movement since the early nineties having remixed the likes of The Cure and Gus Gus and continues to uphold a busy global tour schedule. 16B will also be celebrating the launch of his new artist album release, ’Silenciety’; Dario Dea (Melodic Diggers) – a man about London town, who recently performed alongside Kollektiv Turmstrasse, Frankey & Sandrino and Ame; Techník – co curators of Everything Will Be Ok, who recently performed at Amnesia presents Pyramid at Printworks, and E1 alongside HOSH & Jonas Rathsman; and Ashley Casselle (Dayrise Enterprise / Murge Recordings) who has recently returned from Djing in SE Asia and Australia (whilst writing a tour diary for Mixmag, no less) and is now working on his own new Dayrise Enterprise label.
To celebrate the event launch, there will also be a digital Nitty Gritty compilation album released on Frequenza, featuring tracks from all the artists performing and more!
For more information or guest list enquiries visit
https://hosb.org.uk
+ Google Calendar+ iCal Export