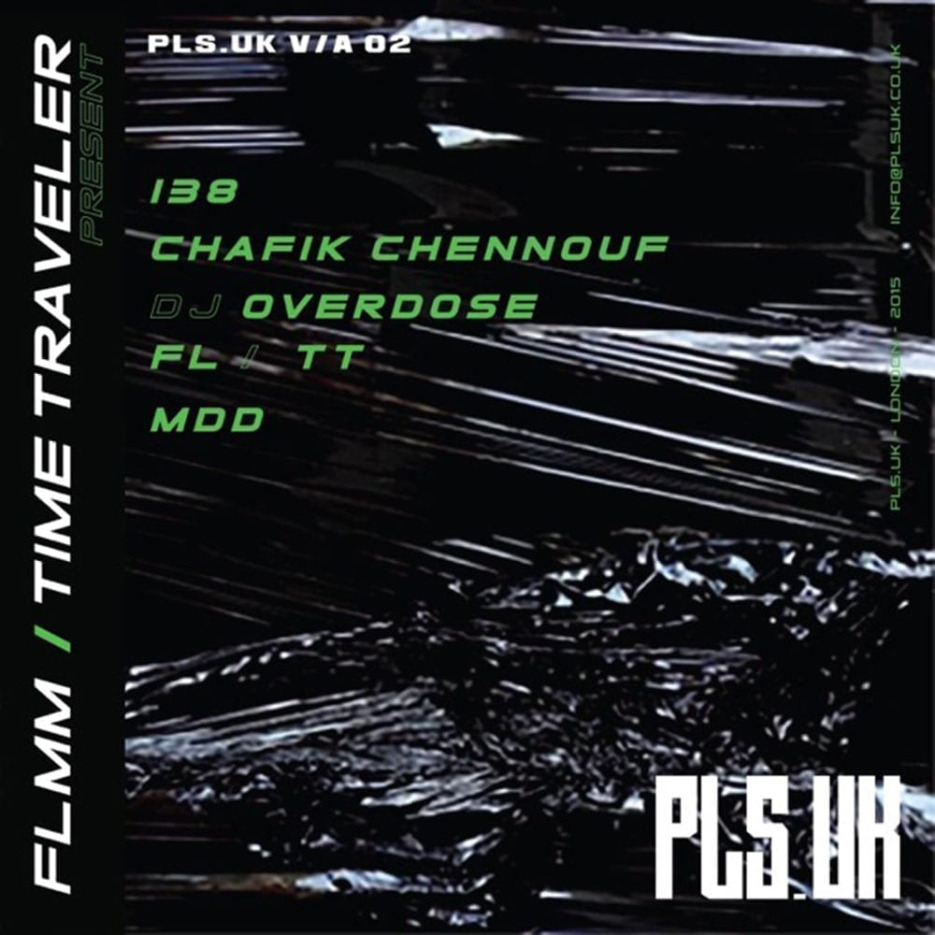 What lures in the darkness can often intimidate and petrify. Pls.Uk have been guided along by disguised hands, herding the powerhouse label to a bevvy of high octane releases which accentuate its modus operandi. They can boast a slew of heavy hitters in the techno game, with locomotives Rvde, Ansome, and Ayarcana supplying some exuberant projects.

Now from the shadows emerges two of the masterminds driving things forward, Italian born and London based FLmm and Time Traveler. The former, who is one of the founders of Pls.Uk, has released on the likes of Motz and Toxic Waster Buried and is now joined by his compatriot. Time Traveler, of course, heads his own Chronicles Diary label, in which he recently released his Harder Times / Tribute EP. Now they are ready to showcase their collaborative talents and give a face to the piston charged label, beginning with a compilation featuring a collaborative track. Prepare for the Power Levelling Sequencer.

Things kick off with the Italian duo with the eponymous aptly named leading track. A weapon of mass destruction, this volatile track could be used to combat the most hectic of dance floors. Destructive slapping percussions ride along with a deep and carnivorous bassline; underground and seedy, you feel flushed into the depths of the rave. An old school rave break is interrupted by a dial tone until it flips with a hip hop scratch and vocal, silence, then annihilation.

‚Cranium‘ is supplied to us by Dutch producer Chafik Chennouf, who heads Leyla Records. Quite an alluring track, putting a genre on this number would prove difficult. A dub-step opening is greeted by hip-hop flair, while a techno pace and stabs generate the flow. The beats are dubbed and raw, with the freedom to move fluidly in the beginning sequence, while icy hi-hats enter to add velocity. Heavily textured, it‘s difficult to expound: think acid, techno, dub, electro, hip-hop; the modulators came out to play.

The penultimate track‚ Z One Wrecks, The Other Destroys‘ is delivered by DJ Overdose. The Dutch producer heads RotterHague Records, which presents some of the filthiest ghetto electro. This cut delivers some slow 80s synth electro. Deep crashing handclaps work with electro-city-synths which feel like driving through this crazy combination of a Miami beach and a futuristic Tokyo city. The track flips into some grittier chords, with a bit more gutter shutter. Some symphonic keys meander through the cut, and the juxtaposition delivers a hot slice of a jam.

Finally is ‚Hold In‘ which was produced by Canadian duo MDD, who released their stunning debut album Reverse The Contrast via HANDS this year. A fitting way to end such an eclectic EP is to eradicate everything. This monster of a cut begins with heavily distorted violent percussions, coupled with sizzling crash cymbals. It‘s industrial, unrelenting pounding on the conveyor build culminates with a deep lingering electric guitar chord. Pandemonium resumes with warping static, and a distant waning vocal deposited infrequently. The break accentuates the vocal, while a 90s rave chord builds and drives the track home.

Expect this kaleidoscopic release out on vinyl October 25th and digitally November 4th via Pls.Uk.

Next up to bat is 138, a Los Angeles based duo of Billy Garcia and Nathan Valle, who head their own TXTRL label. ‚Minibear‘ has those earth-shattering feet stomping bass drum with this peculiar synth that sounds like if you put a squash court in a tube, stretched it out for miles and increased the squeak. Driven by deep crashes and a buried vocal: conveyor belt industry leads to a catchy drum pattern break that builds and detonates with fading vocals.