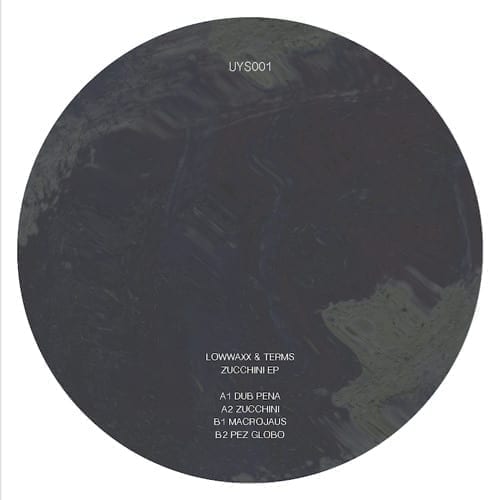 Established back in 2007, Underyourseat is already an endurance project from the island of Gran Canaria. With its roots in the underground dance music scene for more than 10 years, the head honchos Javier Carballo and Berna are responsible for bringing the likes of Cassy, Cabanne or Djulz to the Spanish wonder island. Fast forward 10 years into the future and Underyourseat is emerging on the international market as a vinyl only music output.

For their first release, Lowwax & Terms are up to master the Zucchini EP. The four tracker is a dub heavy fused minimalist record that allures to the label’s home turf and reveals musical sensations over an amid dance floor only release.

The opening track “Dub Pena” is a heavy-hearted tranquil track, fore wording the sound personified within the Zucchini EP. The title track “Zucchini” that concludes side A, sounds rather as a 0/1 coded program transposed onto a rhythmic sequence. With a punchy kick drum and digitalized sounds, the track turns into a sulky and atmospheric, with a perpetuating groove thought-out.

On the flip side, “Marcojaus” touches the same airy cords that characterize the entire EP. The bipolar house fused track touches both spectrums of the release. It’s groovy enough to be anticipated on the dance floor and moody enough to fit any dance floor setting. “Pez Globo” full spots the EP’s journey with a darker distinctive approach to the duo’s production skills. Glitches and ½ house offbeat tempos accompany the ongoing role of the kick drum throughout the track.

Grab your Zucchini copy at deejay.de