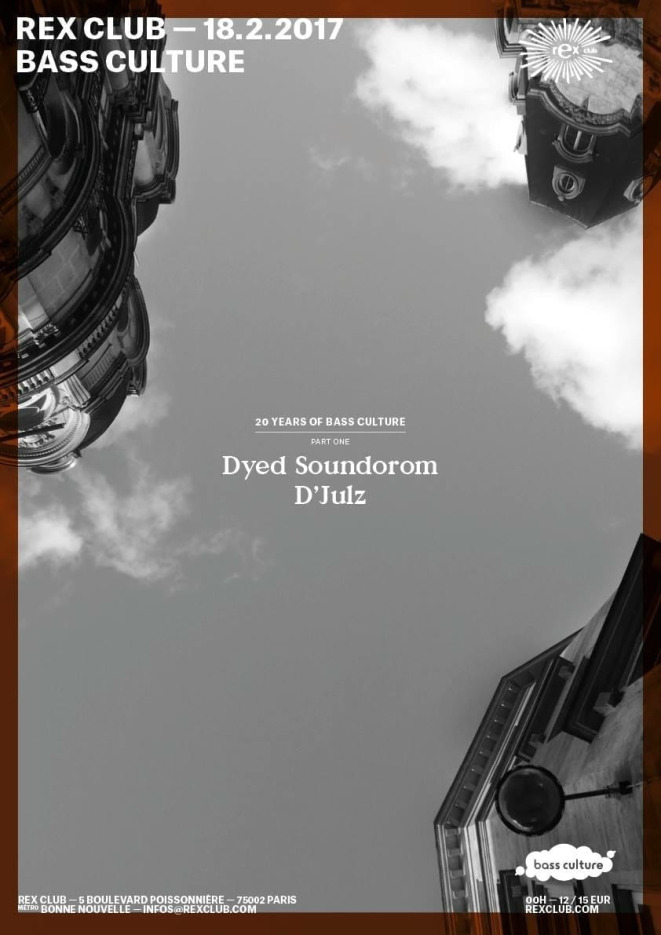 In 2017, Julien Veniel aka D’julz proudly celebrates 20 years of his Bass Culture residency at Rex Club, Paris, making it the longest standing residency in the clubs history. Inviting five special guests to join him, each DJ has been carefully chosen by Julien as a representation of the party’s diversity and ability to remain fresh throughout the last two decades.

The 20 years at Rex Club have not only been a residency for Julien, but also an outlet for the perfection of his craft, allowing him to experiment not only with his programming, but also with defining his style as a DJ.

In 1997 Julien created Bass Culture out of his frustration with the Paris scene. The commercial side of French Touch was taking over the cities clubs and he was missing the darker & dubbier side of House, Acid House and deeper Techno. He wanted to bring variety and depth back to Paris’ nightlife and so with influences from other European cities he was touring in at the time, he dared to go against the grain and invite the raw and original sounds of artists who had caught his attention to play with him at Bass Culture. Terry Francis, Kenny Hawkes, Doc Martin, Josh Wink all became staple guests at the night for the first 10 years of the parties existence. 2005, and with Bass Culture almost heading approaching the 10 year mark, Julien kept his ear to the ground more than ever in search of the next wave of underground talent that was still in fitting with the signature, deep sound that was setting it apart from other Paris party’s. Electroclash had now become the dominant sound of Paris, but with his ability to remain one step ahead of the game Julien snapped up the then emerging talents of Luciano, Cassy, Loco Dice, Raresh, Sebo K inviting some for their first gigs in Paris. Just like that Bass Culture was heading into a forward thinking second faze.

20 years on and Bass Culture is still standing strong as a beacon for Paris nightlife and showing no signs of slowing down. More recent guests like Mr G, Sonja Moonear, Carl Craig, Daniel Bell, Octave One, Praslea, Ryan Elliot, Seth Troxler and Jan Krueger all showcase that to this day Julien has made sure that the musical identity of Bass Culture remains close to its foundation; that being, artists who plays with their heart, soul, and bring that all important bass.