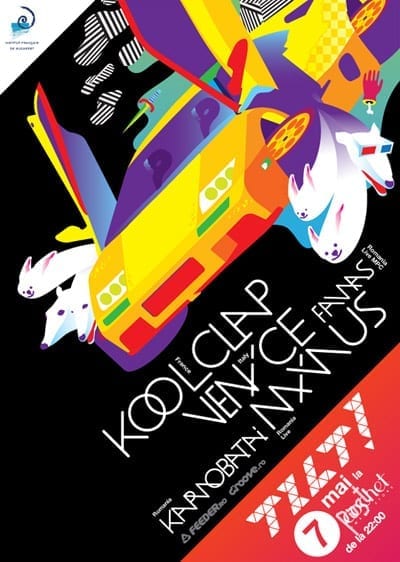 RBMA Radio: It’s one thing to have the French Touch, but it’s another thing to slap those synth sounds into a hip hop-edged electro-funk massage. Tunisian-born Parisian Kool Clap knows his history in more ways than one. He plays it cool, since being introduced to the studio of Bangalter collaborator and Vulture impresario Alan Braxe seven years ago and discovering his stepdad’s synth collection well before that. With the Stardust co-pilot as your mentor, it might be hard to go too far wrong, but this skateboarder takes diverse influences from Brian Wilson, Lifelike, Slave and Dr. Dre to make the electro-funk phenomenon truly his own.

RBMA Radio: Venice knows all about flow! In fact he was a closet b-boy (literally visiting his friend’s studio in a closet without his mother knowing) before he heard Daft Punk and realized that DMC and DMX can pack the same punch. Making the transition from wearing a Flavor-style clock to raw electronic house styles took a while, but bringing the same energy was easy as pie. With some new aliases he was soon collaborating with post-space-disco maverick Cecile for an EP on Gomma Records, collecting props from trashmenagerie.com and other blogs-that-know, and furnishing his DJ sets with those beats to make you sweat. Don’t look now, but life’s a (venice) beach.

RBMA Radio: Even Einstein could figure out that this computer programmer from Bucharest has collected way more musical power ups than your average beat maker. Combining massive mountains of bass with glitchy twinkling Gameboy melodies and a healthy dose of synth funk, it’s no surprise that he’s released three EPs already on the Romanian netlabel Archiva7. But it’s his live performances that have been taking him to festivals all over Europe and Romania, where he dubs out his tracks and reworks them live. On the plus side, if Tron teleported to Kingston, he’d have at least one friend there already. You do the math.