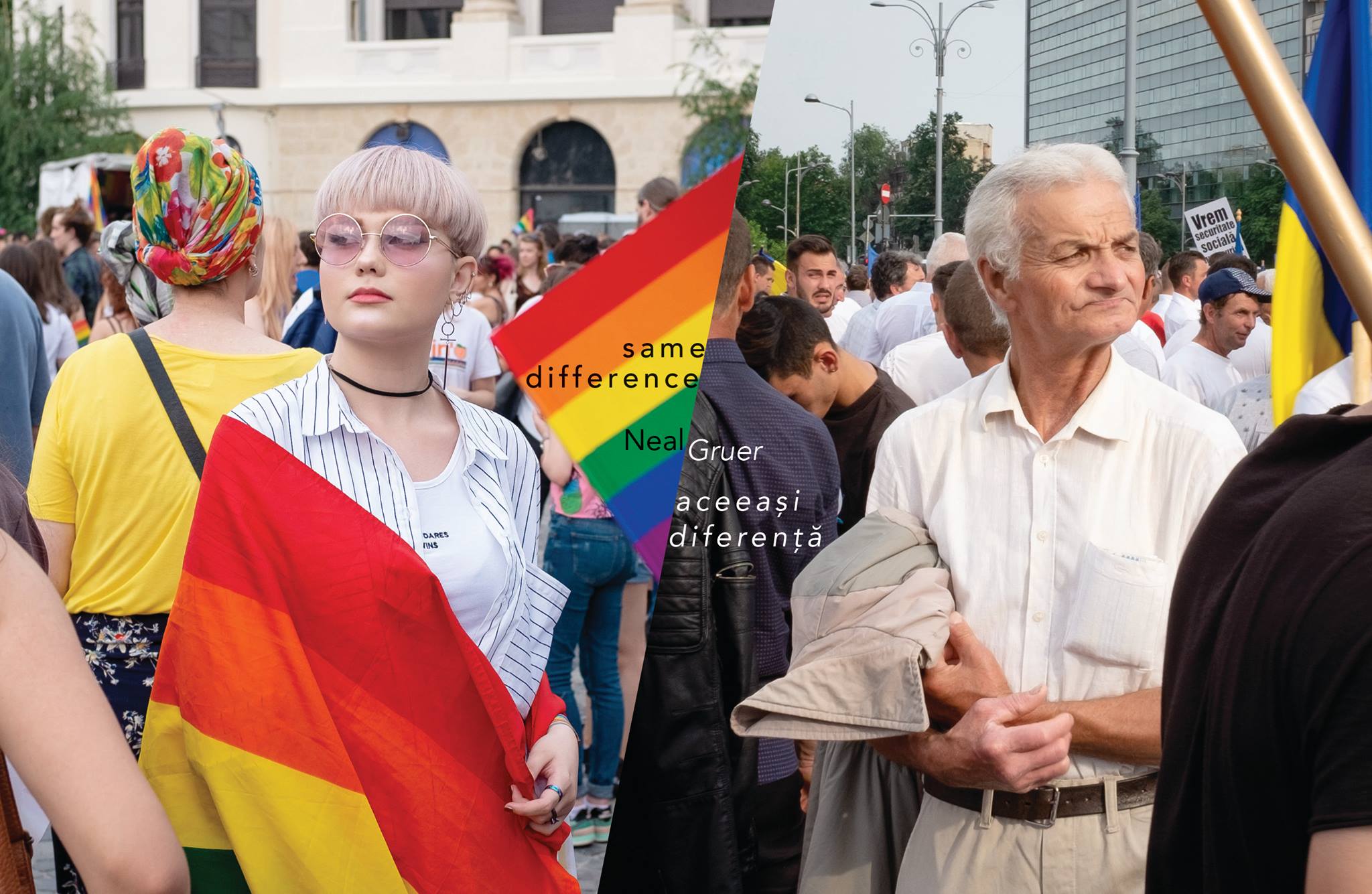 – “If everything is simultaneously false and true,
How is it sure that I am not You?”

The images were taken in 2018 on a single day in Bucharest, when two large groups of people from completely different ends of the social, political and ideological spectra gathered in close proximity for two completely different reasons – Pride march and a rally in support of the populist Romanian government.

While the two gatherings did not interact on the day, subsequent political events in Romania (culminating in a referendum to change the constitutional definition of marriage to apply only to straight couples) revealed that even when social issues appear independent of one another, they, and the people behind them, remain inextricably connected.

Despite the apparent and assumed differences between the two groups, by directly comparing the images from both events, Same Difference / Aceeași Diferență seeks to challenge readers on their perspectives; to put aside superficial observations in favour of deeper questions that ask, what is “difference”, “same”, “belief” and “truth”? In the current context of social polarisation, media “echo chambers” and cursory reactions to online imagery, the book offers a respite from the narrow, protected perspectives we are typically fed, and highlights how those closeted viewpoints often miss the complexity and intrigue that lie beneath one’s initial reactions.

Same Difference / Aceeași Diferență is initially available as a limited first edition of just 107 signed and numbered copies. Self-published by the author and printed by Fabrik in Bucharest, 64 never-before-seen digital photographs sit alongside poetic and narrative writings by Neal in English, with Romanian translations by Cristina Ioana Pașalău. The book was designed in Scotland by Hannah Taylor, owner and editor of She is Fiercemagazine. Other book details: 23cm x 15cm, 72 pages, digital print on 150gsm matte paper, ISBN 978-973-0-28198-9.

Alongside an exhibition of selected images from the book (printed in Bucharest by Fine Art Imaging), Same Difference / Aceeași Diferență will launch on Sunday 16th December 2018, between 18.00 and 20.30, at Bob Coffee Lab in Bucharest – the place where the first photograph in the series was taken. Neal hopes to launch a second edition in the UK, in early 2019.

Neal Gruer (b. 1985) photographs primarily in the genres of documentary, street and portraiture; using both analogue and digital cameras in search of candid imagery and visual poetry. Formerly a commercial lawyer, Neal came to prominence in 2016, when he reached the quarter-final of Sky Arts’ Europe-wide TV talent show, Master of Photography. Since then, his work has been exhibited in Italy and London and featured in several magazines. He came to photograph Bucharest in March 2017 and moved here shortly afterwards.