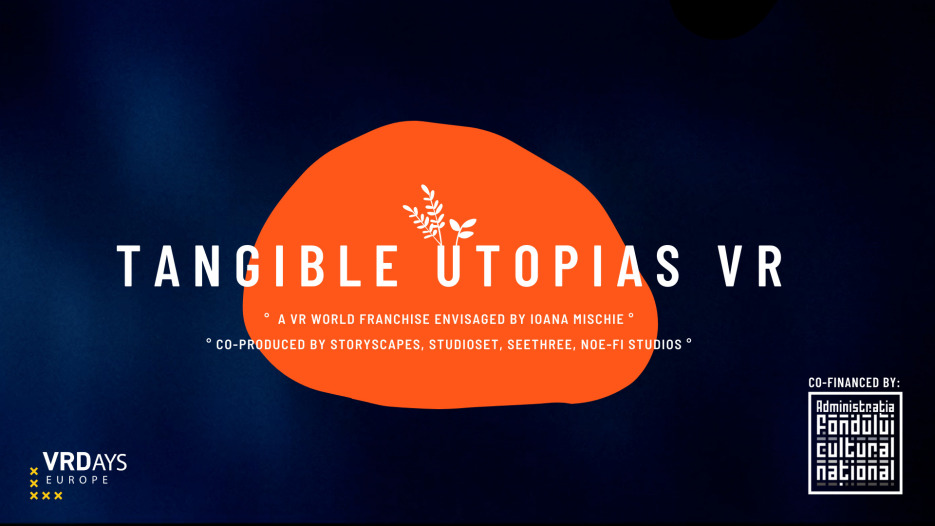 After successfully participating at this year’s edition of Cannes XR and Venice Production Bridge, Tangible Utopias, the brand new immersive VR project created and directed by Romanian-based transmedia futurist Ioana Mischie, continues its international journey. Between 4-6 November, the project will make a pit stop at VR Days Europe, a 3-day annual event which consists of conferences and an exhibition on VR / AR / MR content, creativity and innovation.

Due to the pandemic context, this year’s edition will have a different but well-designed configuration. AR and VR experts will speak in online conferences which participants will be able to access through an online streaming platform. At the same time, participants from all around the world will have the opportunity to access and visit via the Virtual World VRDays platform, the famous Church of VR exhibition, thus being able to explore a multitude of artistic projects awarded and appreciated internationally.

Representatives of Tangible Utopias and of the other selected projects at VRDays Immersive Funding Market will have the chance to take part in interactive discussions at Round tables and meet potential investors for their project through specially curated one to one meetings.

Tangible Utopias is an exploratory VR experience immersing the viewer as a first person into an Odyssey of potential scenarios as envisioned by children around the world on what the cities of the future might look like. The VR universe is conceived as a meditative, exploratory, interactive journey in a multitude of fictional cities, where explorers can choose and personalize their future urban scenario.

Wishing to eventually become an ever-expanding VR Universe, Tangible Utopias begins by developing its first module in Romania with full national support (National Cultural Fund) managing to put together the first 7 future cities. This first module was made based on an archive of over 200 children’s visions gathered with the help of the transmedia project Government of Children’s (film, VR, web) in which 100 Romanian children were invited to imagine how society will look like in 100 years from now.

This VR experience has a multitude of innovative layers. It supports transdisciplinary and transgenerational work processes in all stages of the project, bringing together artists and organizations, entities from other professional spheres ( psychology, sociology, architecture ). At the same time, Tangible Utopias proposes a new audio-visual genre called noe-fi, a new concept developed by Ioana Mischie in her doctoral studies. Unlike the sci-fi genre that bases the creative act on the evolution of science, noe-fi imagines futures focused on the evolution of human consciousness, individually or collectively.

Projects like Tangible Utopias can open new horizons and new production approaches, not only in the field of XR, but also in the film industry, where the pandemic crisis has had an unforeseen impact. It also supports the use of VR technology for meaningful purposes like promoting civic engagement, therefore becoming an edutainment project, which combines education and entertainment for both children and adults.

Unreal blueprints interactivity realized with the help of Adrian Tabacaru. The VR development component in Unreal software is signed by Mircea Olteanu. The 3D models of the buildings in the VR universe are made by Călin Bogdacenco and Alexandru Pop from Studioset. The VR sound and music are signed by Andrei Nechifor, and the editing of the VR trailer by Bogdan Jugureanu. The experience is produced by Storyscapes in collaboration with Studioset and SeeThree. The research and development of the process were facilitated by Germina Ion and Theodora Giurgiuveanu. The children’s visions in this project were provided by the Government of Children.