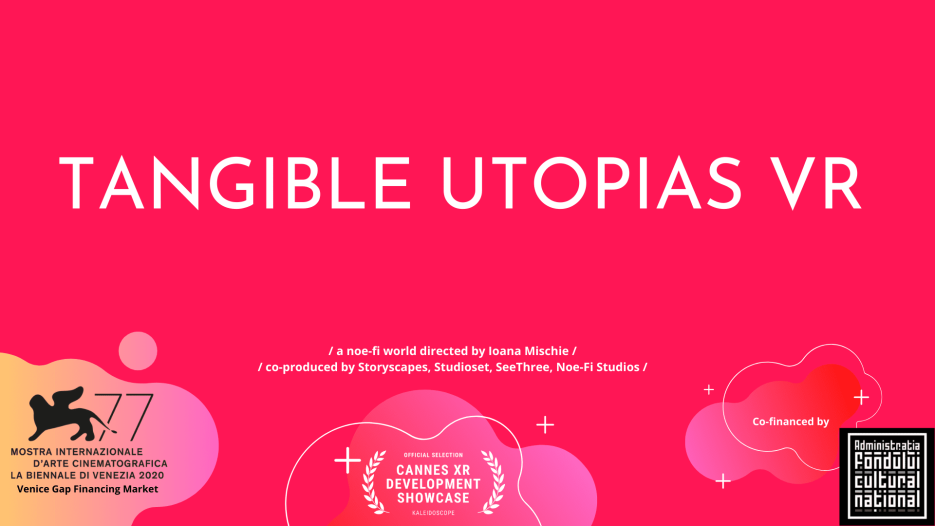 TANGIBLE UTOPIAS is an artistic exploratory Virtual Reality world experience written and directed by Romanian-born transmedia artist Ioana Mischie, immersing the explorer as a first-person PoV into an Odyssey of potential future cities, as co-envisaged by children with ages in between 6 and 13 years old. The project is currently fueled by the visions of the children in Government of Children, an ongoing transmedia universe aiming to archive how kids would re-design their future cities on the long term if they would be the leaders.

Previously selected for the prestigious Cannes XR in the development phase, the VR world is currently looking forward to completing the international financing scheme with at least one more partner. The project is currently produced by Storyscapes and Studioset in collaboration with SeeThree and Noe-Fi Studios. Tangible Utopias is, so far, having national support, being co-financed by AFCN (Administrația Fondului Cultural Național) and aiming to expand on the international scale post-Venice.

The emergence of a genre: noetic fiction

Tangible Utopias launches, among many pioneering methodologies and transdisciplinary practices,  a new genre for audio-visual productions: “During my PhD arts-based research, I have coined the term noetic fiction world or noe-fi, – a genre designing futures driven by the advancement of human consciousness, rather than by the advancement of science or technology alone. Tangible Utopias is a first VR world to tap into this multi-layered manifesto.” – Ioana Mischie, founder of the VR franchise.

The artistic VR project entered pre-production in March 2020 and is expected to complete the financing and to release the first chapter of the experience by the end of 2020. However, the project is expected to continue in a modular manner.

“With an experience of over 12 years of audio-visual production and post-production, Studioset is supporting pioneering approaches in the audio-visual field and our goal for Tangible Utopias is to build up an innovative production pipeline applicable to both XR and cinematic industries.” – Sorin Baican, producer and CEO Studioset.

Projects such as Tangible Utopias take European audio-visual innovation at the state of the art level.

“Our ideal is to design not only a stand-alone VR experience but an entire set of meaningful practices. We believe in holistic artistic worlds that can be showcased not only in customized spaces like cinemas or VR theatres but simply in every single dimension of our societies.” – Ioana Mischie, transmedia artist/futurist.

The virtual reality world is written and directed by Ioana Mischie, inspired by the ideas of interviewed children in Government of Children and creatively adapted into cohesive virtual universes. Previous works of the director reunite expanded cinema,  participatory documentaries and fiction selected to more than 100 festivals worldwide. The current VR world is produced by STORYSCAPES in collaboration with STUDIOSET and SEETHREE. Produced by Sorin Baican, Ioana Mischie and Mircea Olteanu, the project succeeded to obtain preliminary local financing, currently aiming to complete its 2020 goals with international support. The Unreal engine integration is signed by Mircea Olteanu. The 3D models are developed by Călin Bogdacenco and Alexandru Pop from Studioset. The sound and music are signed by Andrei Nechifor, while the editing of the VR excerpts is signed by Bogdan Jugureanu. The research and development process is facilitated by Theodora Giurgiuveanu, Germina Ion and Luna Nica. The project is developed with the kind support of AFCN (Administrația Fondului Cultural Național).

There is a rolling call for future visions addressed to children worldwide here.