The End of the World Party IV @ Atelierul de Productie 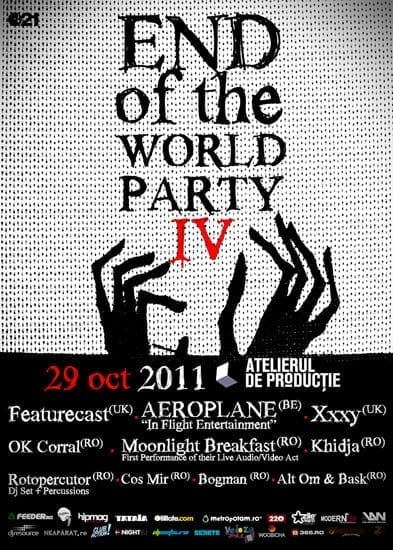 Greetings, my friends! You are interested in the unknown. The mysterious. The unexplainable. That is why we are here.

That is why every year, we crawl out of our skins and become creatures of the night as Halloween creeps.

We gather, we rise, as testimony of the miserable souls who survived this terrifying ordeal in the years that have passed.

“Listen to them.. Children of the night.
..What music they make..”

The long time wished for Aeroplane “In Flight Entertainment” Audio/Video Show is coming to Romania for the first time at The End of The World Party IV, and it’s its First Stop !
You fly with Aeroplane once, you don’t forget it.
In just three years, the Italian-Belgian duo have established themselves as party-starting DJs, remixers du jour -with their spacious cosmic-disco re-rerubs of Grace Jones (William’s Blood), Friendly Fires (Paris) and Sebastien Tellier (Kilometer) – and, via their own piano-sprinkled melancholic beauties like Caramellas, leaders of the nu-disco and Balearica scene. Aeroplane is now a one-man operation. Flying solo has given Vito the chance to flex his classically trained musical muscles: ‘We’ve been put in the dance music category but I’m a songwriter, that’s what I know how to do. I wanted to go back to proper pop music, not being forced to do nine – minute tracks so the DJ can mix in before and after.

Having spent his youth in various bands, Rupert Taylor finally decided to hang up his guitar and mic and began producing electronic music fuelled by his love at the time of drum and bass and techno. Through the influential record shop Pelikan Neck he picked up on the early forms of dubstep and began focusing his productions on bass heavy garage influenced tracks. This led to his first release as “forensix (mcr)” on Revolution music in 2006 with one of his first productions. 2010 saw the release of a split of the very well received 12” on Infrasonics. Comprised of the Baltimore influenced “Blue Flashing Lights” and the Funky Roller “Know You” which was included in FACT magazine’s tunes of 2010 list. As a DJ xxxy has produced well received mixes for FACT, BBQ & URB as well as playing dates all over the UK and Europe.

Described as Mr Midas’ Featurecast has proved himself to be a leader in his field. From DJing to
producing this guy is a juggernaut tearing down the scene with his impressive catalogue of chart
topping releases, and his skills on the decks acclaimed world wide. AKA Lee Mintram well known by his colleagues as a bloody nice chap hails from the UK’s South coast and has had an incredible
couple of years churning out one huge track after another. DJ’s have to agree it’s not a party unless you have Featurecast tracks in the bag! Being described as ‘ONE TO WATCH!’ by A Skillz also impressing and receiving praise from other big players such as Krafty Kuts, Norman Jay, DJ Yoda, Z-Trip, Ali B (Kiss FM) Craig Charles (BBC 6). Creating his own unique sound by effortlessly slipping between genres accompanied by his amazing pin point scratching and cutting, Featurecast will be heard playing out Hip hop, Breaks, Dubstep, and Drum & Bass – as long as it’s funky!

Self-characterized as a retroelectro band, Moonlight Breakfast is one of the freshest presences on the Romanian alternative music stage.
They performed for the first time on the 2nd of July as the opening act for the Jamiroquai concert that took place on the Balck Sea coast. Other performances include European Festivals such as Summer Well (Romania) and Spirit of Burgas (Bulgaria). Definetly an act to keep an eye on!

+ more to be announced