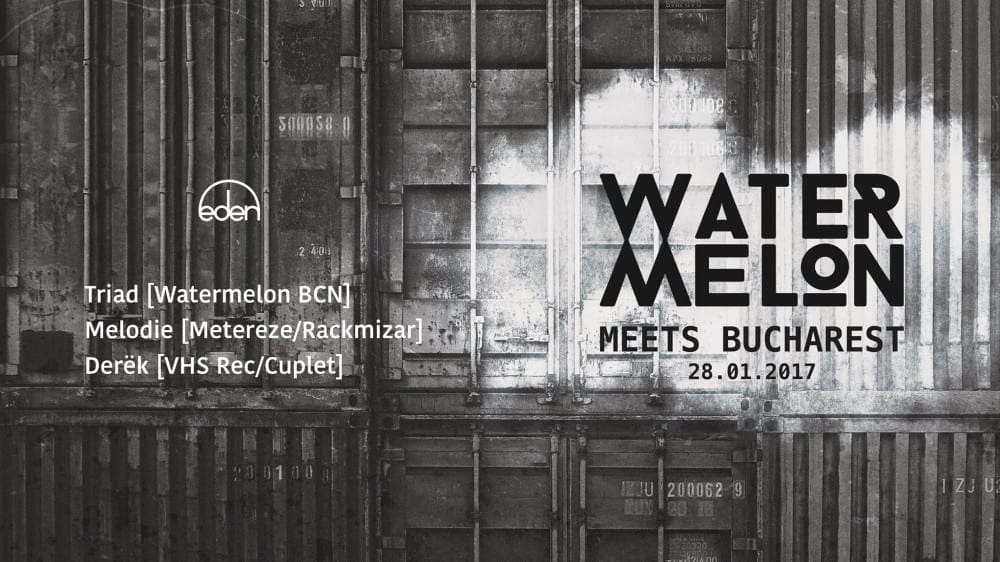 In one of my travels I had the occasion to listen to 3 of the most talented DJs I have met.
They do some of the best parties in Barcelona.
With their wast experience of more than 10 years djing and partying they have something unique to say when they play their back to back set.
It is my pleasure to present them to the Bucharest scene on January 28 along with two of the most talented Bucharest based producers in a deep journey at Club Eden.

Triad  is the residents group and owners from Watermelon, deejays & producers, aka No Replay, Pedro Bucarelli & Zakov.
Watermelon was born in Barcelona. This is an event and promotion specialist with a main focus on quality and avant-garde electronic music.
London, Paris, Lille, Berlin, Lyon,Bruxelles, etc.. are just some of the cities where we take some of the world’s leading electronic music artists.
Based in Barcelona, Watermelon has become a well-known brand which are characterized by their innovative nature.
Their residents as Triad played all around Europe like at well-known Chalet (Berlin), Wood (Bruxelles), Nouveau Casino & Badaboum (Paris), Terminal (Lyon) and of course in the main parties in Barcelona.
Their music is composed of minimal & micro-house tracks mixed with classic house tracks.

Melodie  is Cristi Tudorache who makes emotional house music. As Melodie he released records of a quality far beyond most emerging producers. Stripped down and full of personality, these 12-inches broke from the low-slung minimal sound that’s associated with Bucharest, his hometown, revealing Tudorache’s love for acid and classic house. A typically Romanian sense of subtlety was still present, but the sounds seemed more familiar than the more abstract aesthetic of most minimal.
He has a close relationship with, and greatly influences, his local scene and has done since an early age when he first got the electronic music bug. Around 2005 he began making waves as a DJ, picking up gigs around the local clubs in Bucharest. He then secured a local residency in a cosy space that saw him play every Thursday, Friday and Saturday.
Over the years Cristi has worked hard on his production and continues to play out around Romania.
The likes of taste making press such as Resident Advisor and XLR8R have both featured this contemporary star and his ‘Acid Sunday’ cut also made it into their year end lists as one of the best. With more releases planned, and further gigs in Germany, London, Tel Aviv, Moscow and more beside, he is still very much on the rise.

Derëk as a DJ made his DC10 debut for Pandemonium at just seventeen, and his no nonsense, swingy selections have since seen him spin at some of the sickest parties, like Cocoon Heroes (FR), Transahara Festival (MR) and return dates in Ibiza for Circoloco and Ibiza Underground.
Not like others just say, Derek really started doing this as a teenager, inspired by the musical environment, by the local clubs and also by great artists, he fully dicovered the real scene for electronic music at an young age .
After calculating the perfect formula, his confidence pushed him at the decks , this was his first step in a world of Dj’s and producers.
Second step was him playing in the biggest venues around the world. An inspiration even for well known established djs.