This one of a kind canvas is painted by Pisica Pătrată in 2015, during the Pisica Pătrată – Work in Progress solo exhibition at H’Art Appendix. The work depicts his well-known square cat characters interacting in a different reality, where transparencies and shadows no longer reveal nor obscure meaning.

In our online gallery, you can find some of the most atypical pieces made by local artists and living legends that are embedding in their artworks the authentic vibe of street art & graffiti. 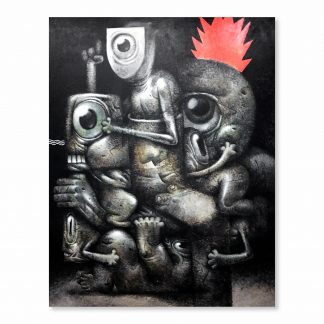