This serigraphic print created from an engraving by Pisica Pătrată reveals a complex outdoor scene set in a deforested wasteland bordered by a river, populated by 3 characters – the pensive man who sits by the stream, the overseeing silenced woman and an angry-looking artist who faces blank sheets of paper. One cannot help but wonder about the separateness of their realities and how do they connect.

There is only one available. 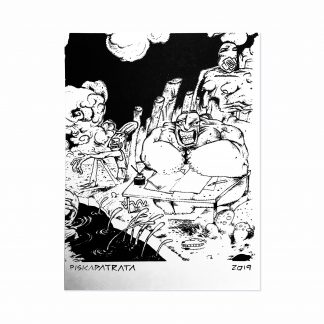 🎟 Coupon code: book20
Explore street art with a 20% discount on the Un-hidden street art in Romania book and e-book, for a limited time! Dismiss