We are thrilled to be able to offer for sale an original painting on canvas,  signed by Romanian graffiti artist Nesk, created in 2020.

The original painting on canvas, the third in the series, features the artist’s alias, Oksen, written in his characteristic style, which he often uses on trains, subways and walls. The blue, distinctive letters, are superimposed over a chaotic, contrasting background, made of geometric and organic patterns and shapes, emerging through space.

You will receive an original 60 x 20 cm artwork, acrylic markers on canvas, painted in 2020. The work is dated and signed by Nesk on the reverse.

Oksen, aka Nesk, is a Romanian graffiti writer, part of the active crew called RSH (Really Sick Habits) & H2M (Hard to manage). Nesk has a deep connection with the underground graffiti scene for more than two decades. He painted in Bucharest, Cluj, Timișoara, Vama Veche and many other cities around Romania and Europe. For creative artists like Nesk, who like spending time creating their complex piece composed of different types of letters, textures and patterns, and characters, freight trains are a good option. Compared to trains, metros, or other mediums, the artwork painted on freight trains lasts for many months and travels longer routes. The downside of this subculture is that you don‘t have the chance so often to see these amazing artworks.

See the print by NESK, featuring and signed by ERPS, and Nesk’s painting of Mser in action, as a high-quality print reproduction. 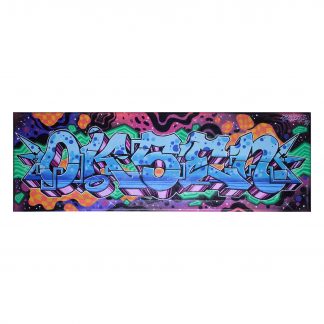