We are pleased to offer for your consideration another small fragment of the local graffiti scene, painted back in 2011, titled “Calypso“, which is the second canvas by HOMEBOY LDJ available in our online gallery.

We continue to look deeper into the secret vault and managed to offer for your consideration another small fragment of the local graffiti scene, painted back in 2011, titled “Calypso“, which is the second canvas by HOMEBOY LDJ available in our online gallery.

Using lettering as a form of art, HOMEBOY LDJ experiments at the boundaries of graffiti and art, incorporating subtly into his works, elements and techniques from both areas.

In this particular study of the alphabet, his recurring subject, Homeboy LDJ chose to reference Calypso, a play on the fact that he employs Homer’s moniker. In Greek mythology, Calypso (/kəˈlɪpsoʊ/; Greek: Καλυψώ, “she who conceals”) was a nymph who lived on the island of Ogygia. Homer’s Odyssey tells a story of Calypso, who detained the main character for seven years, before allowing him to return home.

You will receive an authentic artwork by HOMEBOY LDJ, spray & marker on canvas, 40 x 80 cm, painted in 2011. The work and signed by Homeboy LDJ on the reverse.

One of the most important things for graffiti is writing your name in a cool way and designing the letters in a particular style. For a long time, the graffiti styles evolved parallel with typefaces, typography, calligraphy, comics and cartoons.

One of the local artists took this process of making the letters on completely another level, and he didn‘t stop writing only his name, but many times he draws the entire alphabet. We don‘t know exactly when HOMEBOY LDJ started drawing this series of alphabets, but certainly, we can see that he has a lot of style and skills. Each artwork follows a theme. Each letter has a distinct shape, texture, style, and colour representing different concepts, zooming into the micro or the artist’s macro imaginative universe.

If you are an urban explorer and want to see some of the works made by Homeboy LDJ, you can visit the Un-hidden Romania map to find the addresses. You can find some of his works in the Un-hidden Romania book. You are invited to read the article about HOMEBOY LDJ to find out more about one of his main goals to transform the wall/paper/canvas’s flatness into a 3D universe here.

Also see the Alphabet, the other original painting by Homeboy LDJ available in the feeder.ro/shop 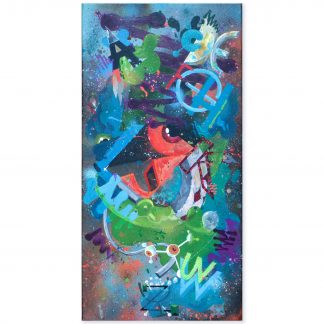