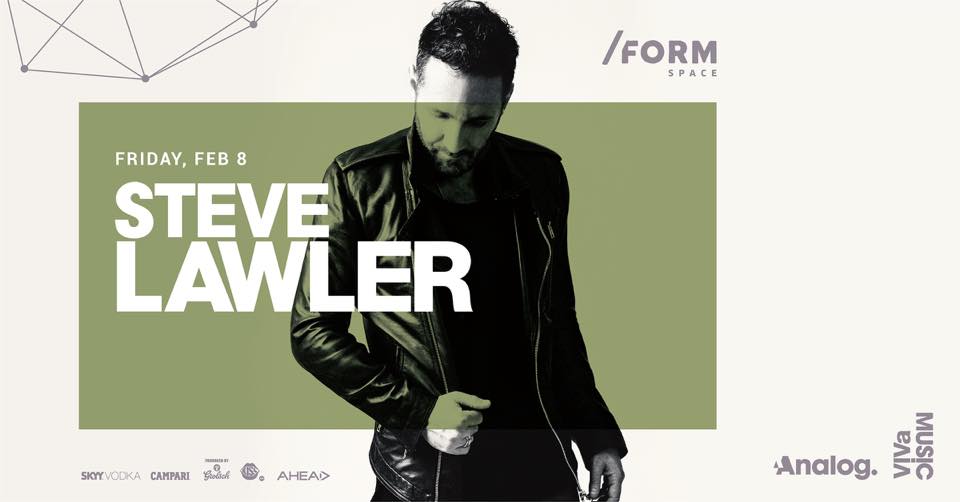 A child of the acid house generation, Steve Lawler has been busy with the beats long before genres were but a twinkle in clubland’s eye. You would be hard pushed to find a more in-form, in-demand and talented artist as Steve Lawler.
On February 8, don’t you miss him at /FORM SPACE.

You would be hard pushed to find a more in-form, in-demand and talented artist as Steve Lawler. Regarded as highly by his industry peers as he is by his huge global base of musically educated fans, Steve has been busy with the beats long before genres were but a twinkle in clublandʼs eye. An electronic artist who defies generic boundaries, he began his career organising the infamous motorway raves back in the early 90s underneath the M42 motorway.

As a producer, his releases have been signed by some of the world’s most established recording labels. R&S Records, Systematic, Drumcode, Harthouse, Cocoon, MBF, OVUM, Sci+Tec, Tsuba, Be As One, Kostbar, Soma, Hot Creations, 8bit, Moon Harbour, Knee Deep, Play it, Say it and of course his own recording label VIVa MUSiC.

VIVa MUSiC, which is now celebrating its tenth anniversary, has quickly earned a reputation for breaking new talent; it’s released tracks by such artists as Jamie Jones, Reboot, Audiofly, Simon Baker, Davide Squillace, Bushwacka, Livio & Roby, Ilario Alicante, Tiefschwarz, Waze & Odyssey, Doorly, Denney, Christoph and of course Lawler himself, amongst many others. VIVa MUSiC releases frequently find their way into the record bags of dance music’s highest profile tastemakers. As an A&R, artists like Detlef, Denney, Leftwing & Kody, Simon Baker, Audiofly, Leon, and Livio & Roby could all tell you about the support, encouragement and opportunities Lawler has given them.

VIVa MUSiC works as a culmination of everything thatʼs gone before; from putting on the aforementioned illegal raves, to his residency at super club Cream back in the mid 90ʼs and the success story of his 7 year residency at London’s The End. Whilst nobody could question his underground credentials, Steve’s talent as a producer has also led him to remix high profile artists such as Jamelia, Dido and Justin Timberlake. As well as recording a track for the blockbuster horror movie by Ian Softly, ʻThe Skeleton Key’, Heʼs released some of the industryʼs most well-known mix series such as the ʻDark Drumsʼ ʻLights Outʼ and the ʻVIVa Series’. Bringing his well-honed selection skills into 2016, Steve has now begun his own monthly radio show, NightLife Radio. Allowing him to champion the latest and best underground artists he’s discovered in the Who’s Hot and What’s Hot section, Steve also provides a live recording from one of his recent sets in each show.