Over 100 photos tell the story of the Creative Quarter 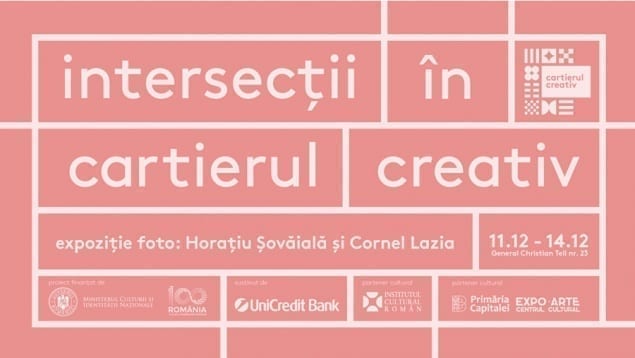 Over 100 photos tell the story of the Creative Quarter in an exhibition about history, culture and entrepreneurship

Between December 11th -14th, from 2PM to 9PM, in a new cultural pop-up space, placed on 23 General Christian Tell Street, will be opened to the public the photo exhibition Intersections in the Creative Quarter.

The project aims to highlight the contrast, but also the intersections between the valuable cultural infrastructure and the actual creative entrepreneurship, presenting a collection of images and stories, an imaginary journey through the most effervescent creative area in Bucharest, the Creative Quarter. The entry is free.

The exhibition also explores the way relationships development and the synergy between cultural institutions and creative organizations can generate growth of cultural consumption and also improve the quality of life by creating a better perception of the city.

These 100 photos that complete the project are signed by Horatiu Sovaiala, the one that surprised sparks of optimism and energy around the people from the quarter, and by Cornel Lazia, whose images emphasize the unsuspected energy that the cultural institutions from the quarter are releasing around them.

Furthermore, on December 14th, at 7PM, during the exhibition, the forth number of the Creative Quarter newspaper will be launched.

The Creative Quarter newspaper is launched every two months and focuses on the stories of the people that live here, the places and the businesses from the quarter with the same name. The first number explored the area around Grivitei Street – Victoriei Street – Regina Elisabeta Boulevard, the second one Ştirbei Vodă – Cişmigiu Garden – General Berthelot and the third completed the map with Dacia Boulevard – Griviţa Street – Constantin Budişteanu. The forth number elaborates the stories around Victoriei Street – Ion Campineanu – Ion Brezoianu.

The Creative Quarter of the Bucharest, area around the Cişmigiu Park, delimited by the Regina Elisabeta Boulevard, Griviţa Street and Dacia Boulevard, Victoriei Street and Berzei Street, aims to show the potential that the creative industries have in the community, and regarding the economic and urban development. Due to the big concentration of creative entities and organizations in the area, it has the potential to determine the positioning of Bucharest on the map of the cultural-alternative touristic destinations.

A project supported by UniCredit Bank.

The Institute promotes the creative industries from Romania, aiming to contribute in modernizing Romania. The Institute creates and organizes events for 20 years now and brings together designers, entrepreneurs and the audience of creative industries. Through everything we do we contribute to building a strong infrastructure for developing creative industries, we grow and diversify the audience of workshops, designers, small businesses, agencies and manufactures, we promote creative entrepreneurs in Romania and in the region. It founded Romanian Design Week, Diploma, Gala Societăţii Civile, AdPrint, Internetics, Institute, The Magazine, Noaptea Agenţiilor, organiser of Effie Awards România, Şcoala ADC*RO and ADC*RO Awards.