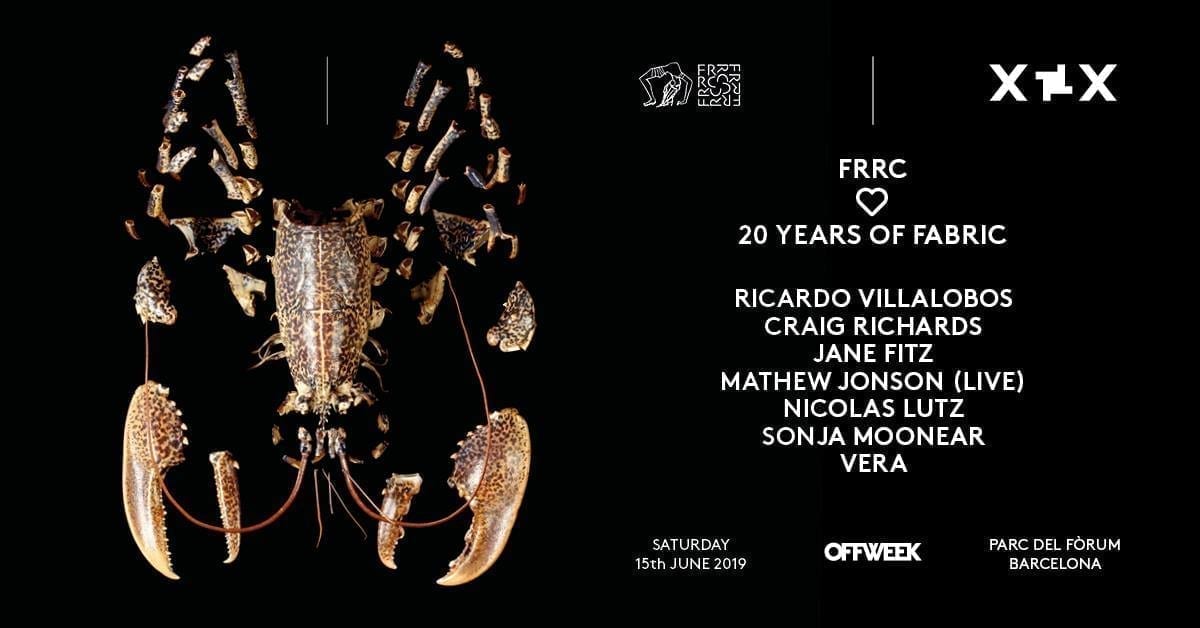 FRRC and fabric unite for a special showcase at Parc del Fòrum as part of Off Week Festival 2019. As the main man and creative driving force behind FRRC, Ricardo Villalobos leads the proceedings, linking with his London home as part of their 20th-anniversary celebrations.

Villalobos is joined by one of today’s most inspiring DJ duos, Craig Richards and Nicolas Lutz. Known best for shining a light on the undiscovered corners of electronic music, their endless pursuit of mind-bending techno, electro and IDM records expresses a sheer devotion to the craft of DJing.

Mathew Jonson performs live. A long-standing fabric regular and respected techno figurehead, Jonson’s expert grasp of melody and hardware synthesis has made him one of the genre’s most singular artists. He’s written a wealth of dancefloor bombs over the course of his career, which he brings to life in electrifying form during his acclaimed live performances.

Top-tier minimalist Sonja Moonear also lands. While the Swiss selector is typically associated with house and techno’s stripped-back forms, her record collection spans driving techno to trippy house and vintage UK garage. In her sets, she stitches these styles together with a refined finesse, a skill that’s earned her a reputation as one of the sound’s most captivating DJs.

Also lined is one of the UK’s most highly esteemed selectors, Jane Fitz. In her bewildering DJ sets, the London-based artist can cross hypnotic techno with 90s deep house, a sound she’s honed over the course of three decades.

Vera also stops by. One of the Berlin scene’s long-standing figures, the Melliflow founder is known best for her subtle approach to mixing, a style she’s used to showcasing at low-key spots like Club der Visionaere and Hoppetosse.

The leading figure behind Frequence Resonance Remote Control, Villalobos completes a bill that should reflect the spirit of his lauded early morning fabric sessions.

Vote your favourite festival: POLL: What are the most exciting music festivals in Europe, 2019?