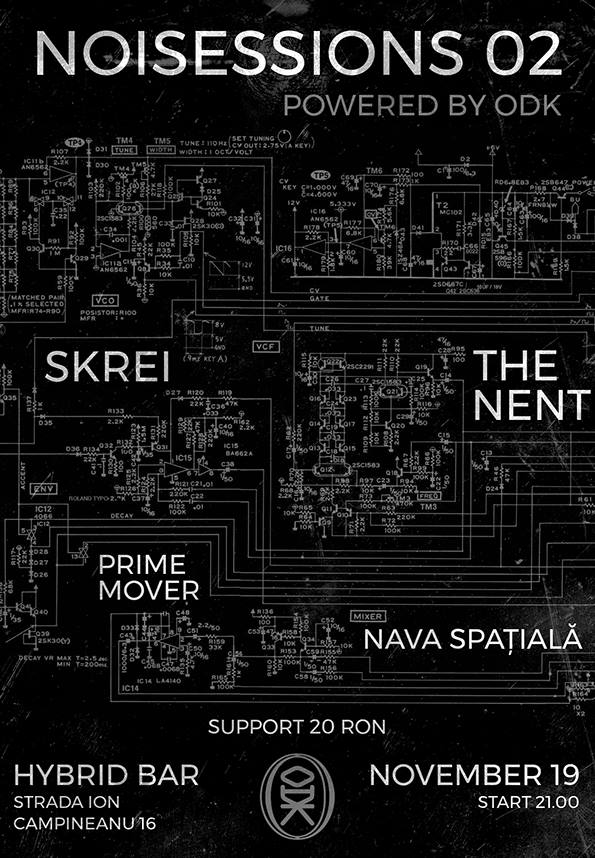 ODK and Hybrid present NOISESSIONS Second Edition, as a continuation of the live event series in the drone/noise/experimental domains.

Atypical for the Romanian underground scene, these events are a must-see for electronic music lovers, and especially for experimental/industrial music fans.

Important note: We strongly impose the policy of “respecting the artist”, meaning we encourage you to maintain silence during the stage performances, and avoid using flash photography – respect the person on stage, and their efforts to entertain you.

SKREI is the project of Giuseppe Capriglione. The loop tape is the only sound element of his live set. Processing and working with multi-tracks tape recorder, he creates an alchemic mixture of Noise/Drone Sounds.

The Nent is an Audio/Video project of Berlin based music composer and visual artist Vince Gagliardi. The soundscapes he builds are risen up from the fragile structure of inner emotions, to ultimately collapse into the enormous nothingness of the unknown. The new series of live “N_#” is the collision of different compositions, in which vast spaces and choking feelings are evoked by beating drums, tuned on a dark palette of sad memories and hollow sounds.

A duo specialised in noisenautics, Nava Spatiala creates sounds which are based on noise/drone/ambient atmospheres, relying on apparently chaotic, unintentional and improvisational use of the spectrum. Carefully keeping you alert along their journeys by the dadaist and deconstructivist approach, they invite you to a continuous exorcism of the present – the soundscapes Nava Spatiala creates also work as a pretext for meditation. Nava Spatiala started in 2010 and their musical approach is based on field-recordings, as well as on sound synthesis.

Prime Mover is the Observer’s enclosure. Mechanically flexible, it hums and roars as it aims its engines against the void, carrying its sentient cargo.

*The club has a capacity of 90 people, at any time of the evening we can not afford to exceed this number.