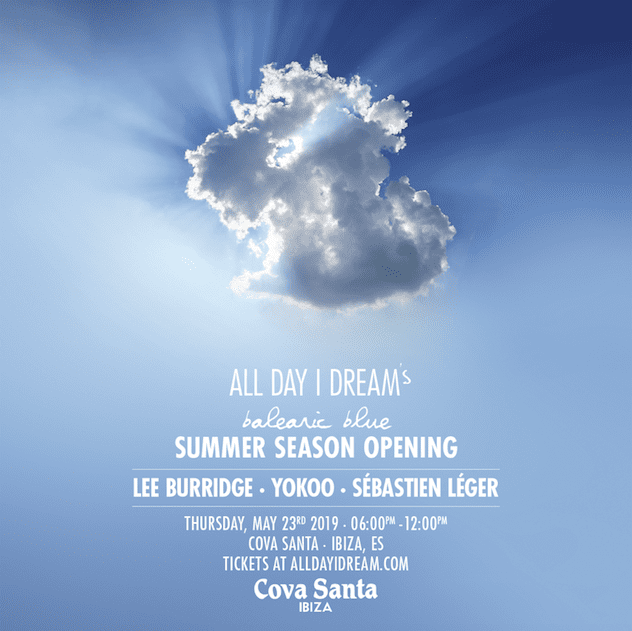 All Day I Dream returns to Ibiza for its second season following last year’s hugely successful island debut. Joining head honcho Lee Burridge on May 23rd at Cova Santa will be longtime musical partners, YokoO and Sebastien Leger, while further line-up additions for the 3 remaining dates will be announced in the coming weeks.

This season will mark All Day I Dream’s debut at Cova Santa, a stunning venue set in the Ibizan countryside built around an ancient cave, making it the perfect setting for Lee Burridge and his family of like-minded artists to write yet another beautiful chapter of their musical story.

For the series, Cova Santa will be decorated in structural art, lanterns, fairy lights and flowers married seamlessly together, forming a haven, where you too might just get the urge to close your eyes and drift away in while a soundtrack of mystical, hypnotic and emotive music enchants you. All Day I Dream parties offer something fresh and unique in the musical landscape of today; transcending genres, social norms and musical politics they offer an authentic all-encompassing musical journey that you might just feel like joining them on.

The brand will also be embarking on a series of one-off global events in exciting locations such as Moscow, St. Petersburg, London, Barcelona and Amsterdam, alongside a return to the US for shows New York, San Francisco and Los Angeles.