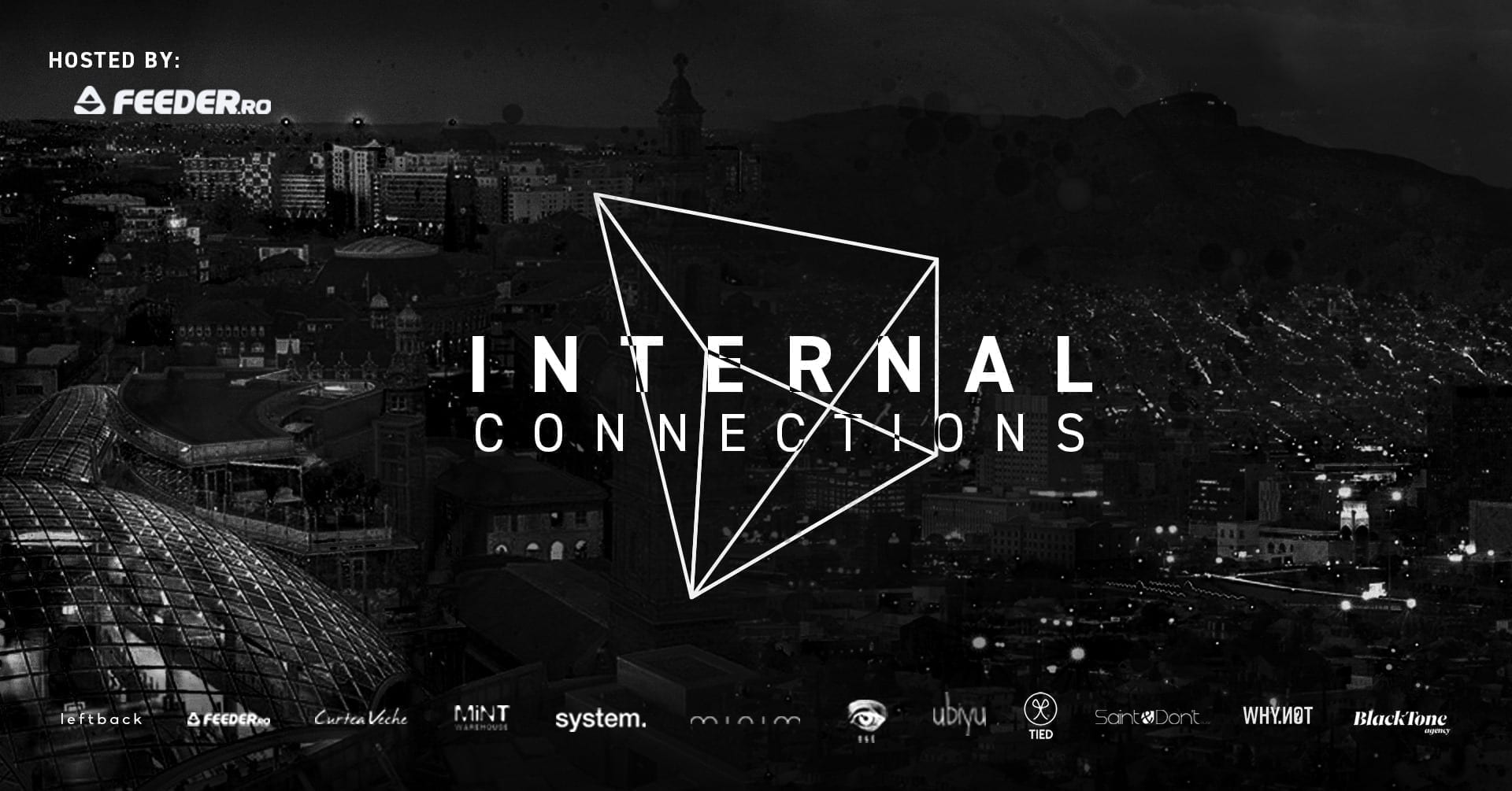 Internal Connections returns for part 2 hosting 12 hours from a secret location in the UK and then over to the USA and surrounding countries for another 12 hours to make it a 24-hour rollover marathon of music!

Roya Brehl [The Off Licence] 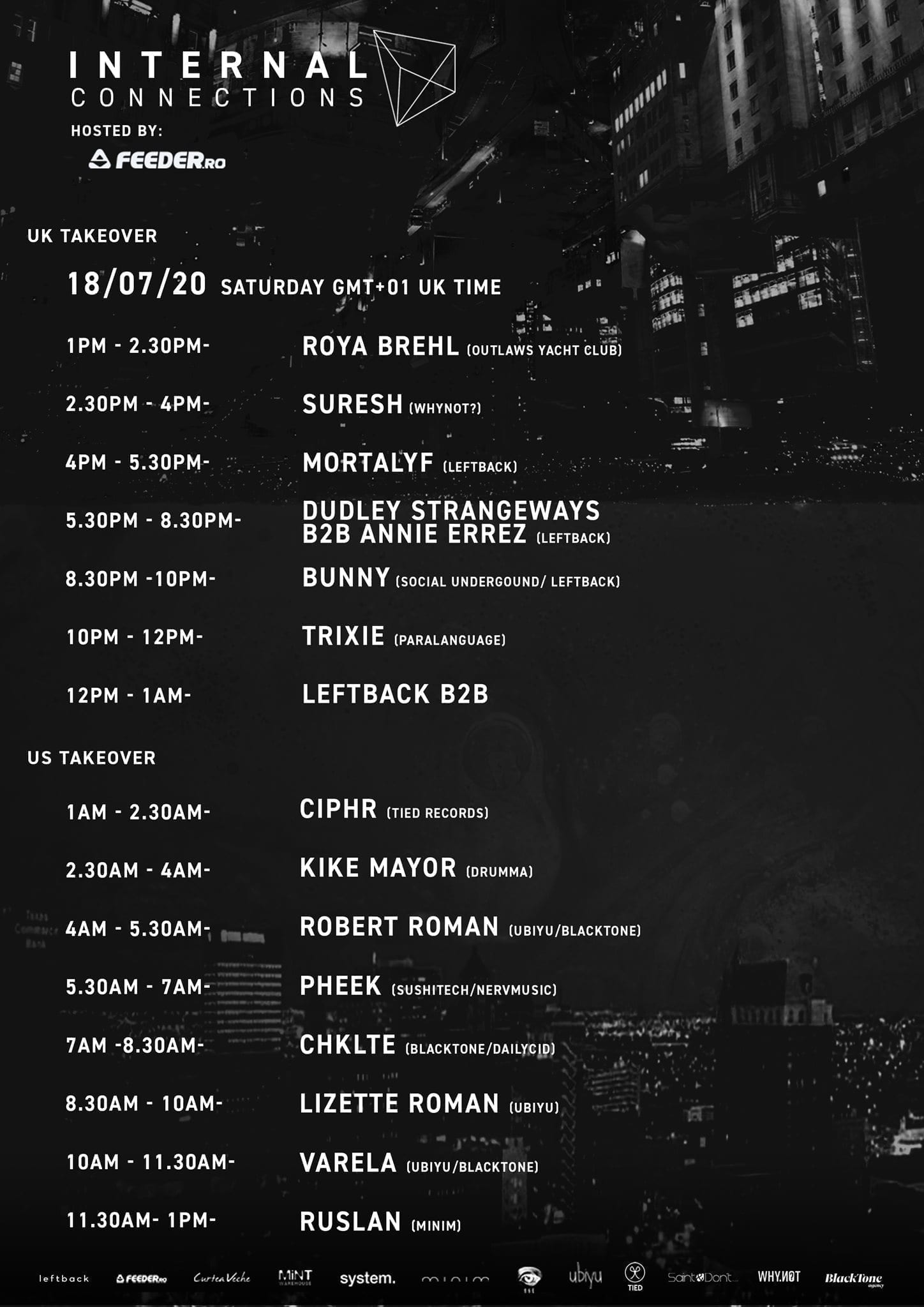 Tied duo, Ciphr have been pioneering their stripped-back minimal within the Chicago underground scene for some time, setting up showcases and parties across the city featuring Traumer, Varhat and Funk E just to name a few. Their label Tied has played host to likes of Archie Hamilton to SAKRO. They’ll be joining the ubiyu crew this weekend.

Trixie has enjoyed a rapid rise on the London scene and beyond over the last two years, most notably with the success of her popular Paralanguage parties. As such Trixie‘s style continues to change and evolve both as a DJ and now as a producer. Trixie’s DJ sets, predominantly based in minimal, deep sounds, use obscure interludes and textures to create unforgettable moments on the dance-floor. Trixie will be joining the UK crew. 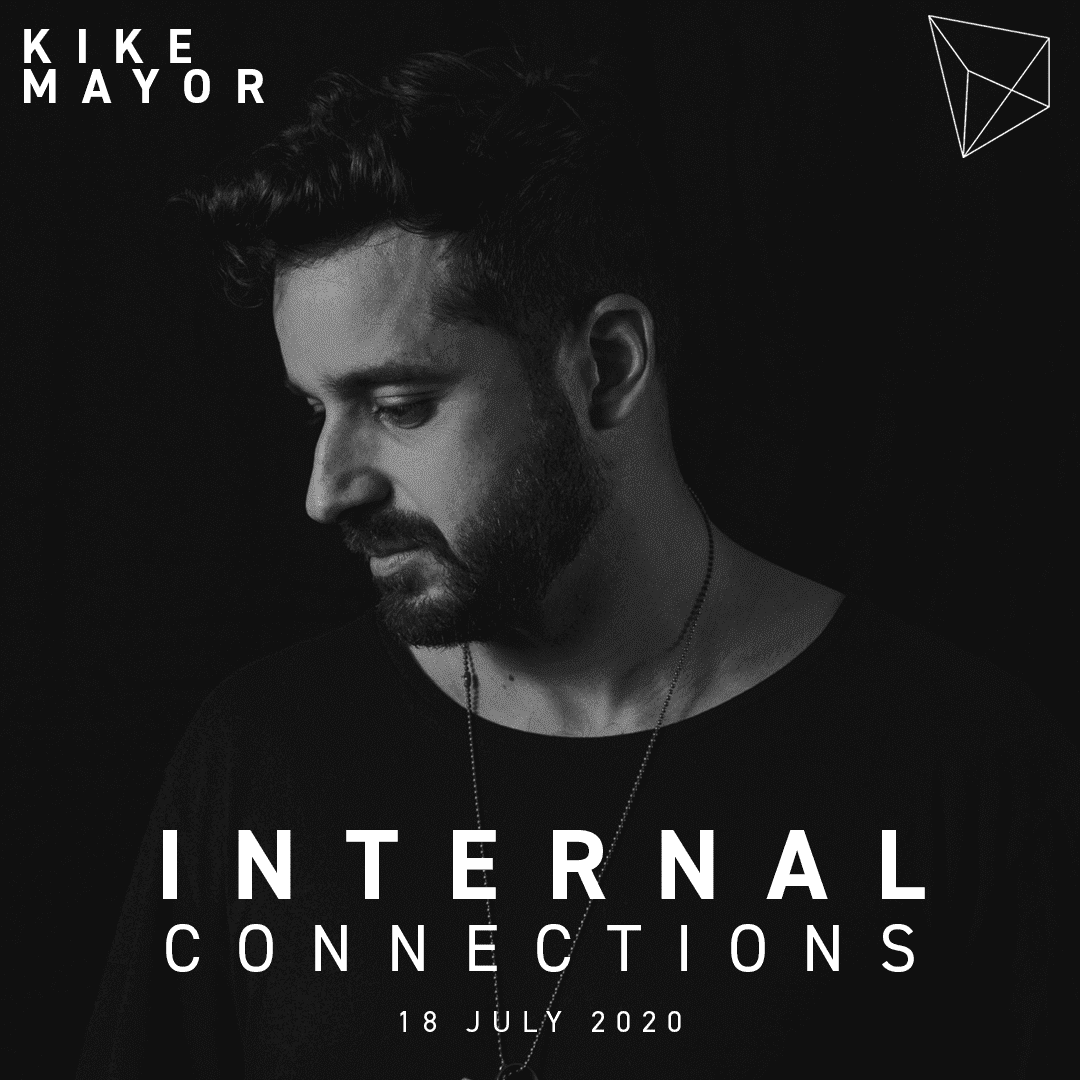 Born in Lima, Peru and based in Los Angeles, KIKE MAYOR is one of the brightest names out of the South American underground music scene. DJ by nature, Kike has played a pivotal role in Peru’s electronic music development for over a decade. His back catalogue features collaborations with Pheek and Alexis Cabrera as well as releases on Little Helpers and Drumma.

“This Saturday Internal Connections vol. 2 hosted by FEEDER.ro. Joining a line up with all my US-based friends. Set Time: 6:30 – 8:00 pm” – Kike Mayor 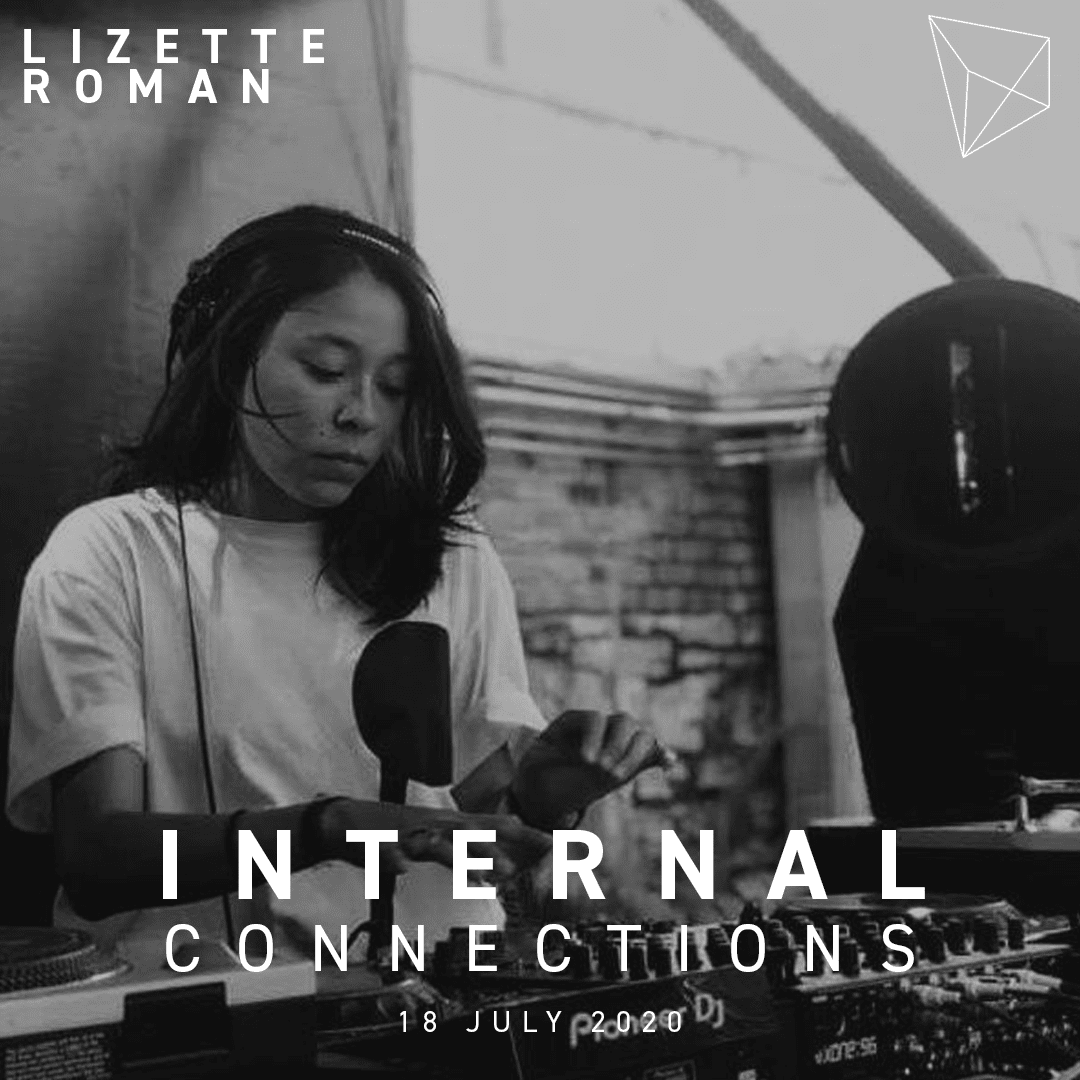 One half of ubiyu, Lizette Roman has been an integral part of the developing underground scene within Austin over the last few years. Organising parties with her Co-founder Robert Roman, ubiyu now have a foundation within the dance and electronic music community in Texas. Catch her on the ubiyu stream this weekend. 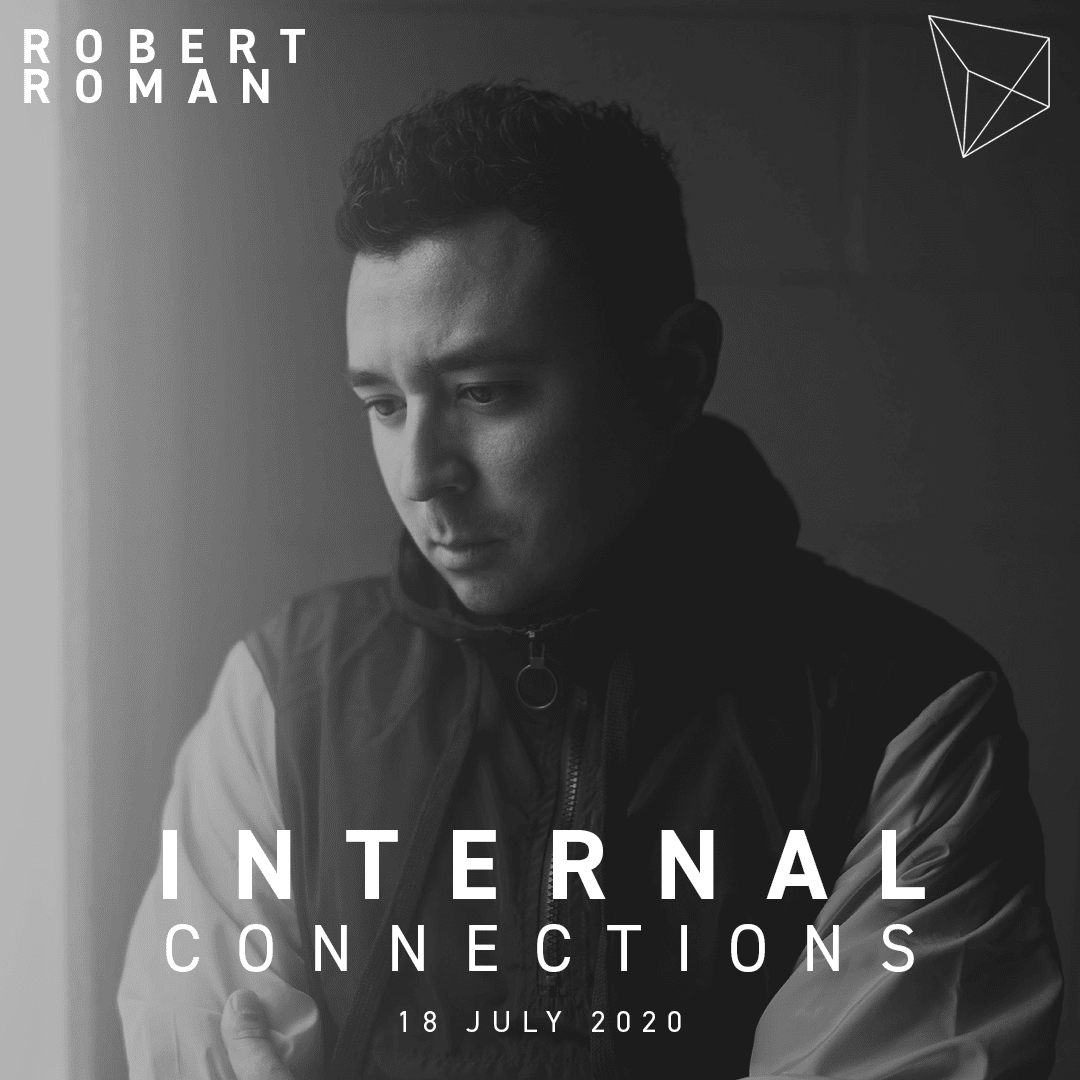 Robert Roman has a long relationship with sound and acoustics since the young age of 8. Influenced by the Mexican electronic music scene, and inspired by his hometown DJs, Robert was driven to bring more diversity to South Texas. From the age of 18, he began his journey as a DJ and Promoter through beach-raves, utilizing generators and local talent, sending waves through the community and sparking a new scene in South Texas. This enabled Robert to host international DJs at his club residency for the following two years. Having attended audio engineering school in Austin, Robert went on to spearhead Movement Collective, a party-series based in both Berlin and Austin, hosting multiple residencies throughout his tenure. Eventually, Robert became involved in BlackTone Agency, an agency and party series, founded by Robert’s friends. Robert is also the co-founder of ubiyu, a record label and party series in Austin which currently hosts two monthly residencies to showcase a roster of international DJs and is steadily releasing acclaimed EPs across multiple formats. 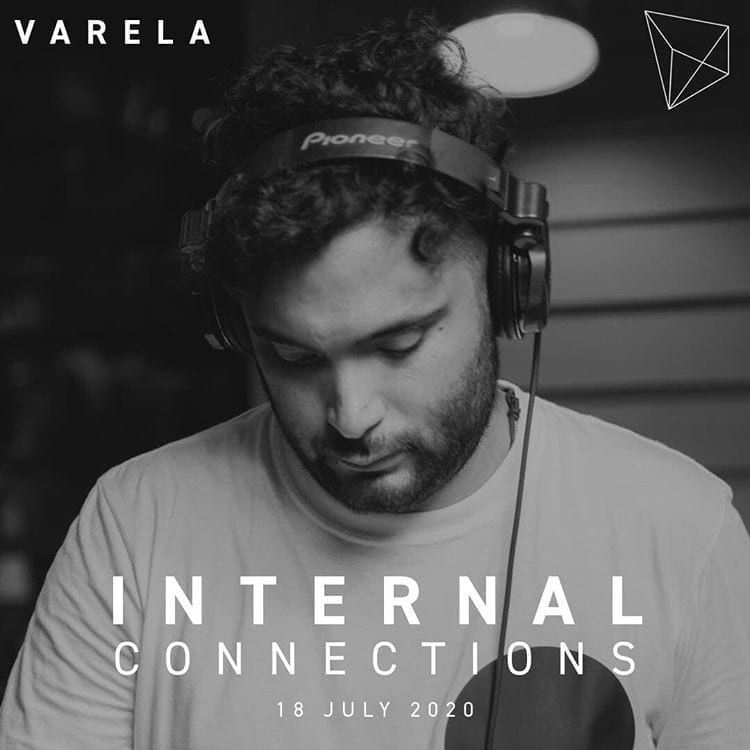 Joining the US crew is Varela, one of the pioneers responsible for introducing underground sounds to the city of Austin, Texas in the last couple of years. Having hosted and opened for artists such as Afriqua, Varhat, Priku, Andrey Pushkarev, Voigtmann, Mihigh, Sepp, Sakro and Lamache, Varela maintains a perfect dynamic between micro-house and minimal characterized by his own unique spontaneousness. 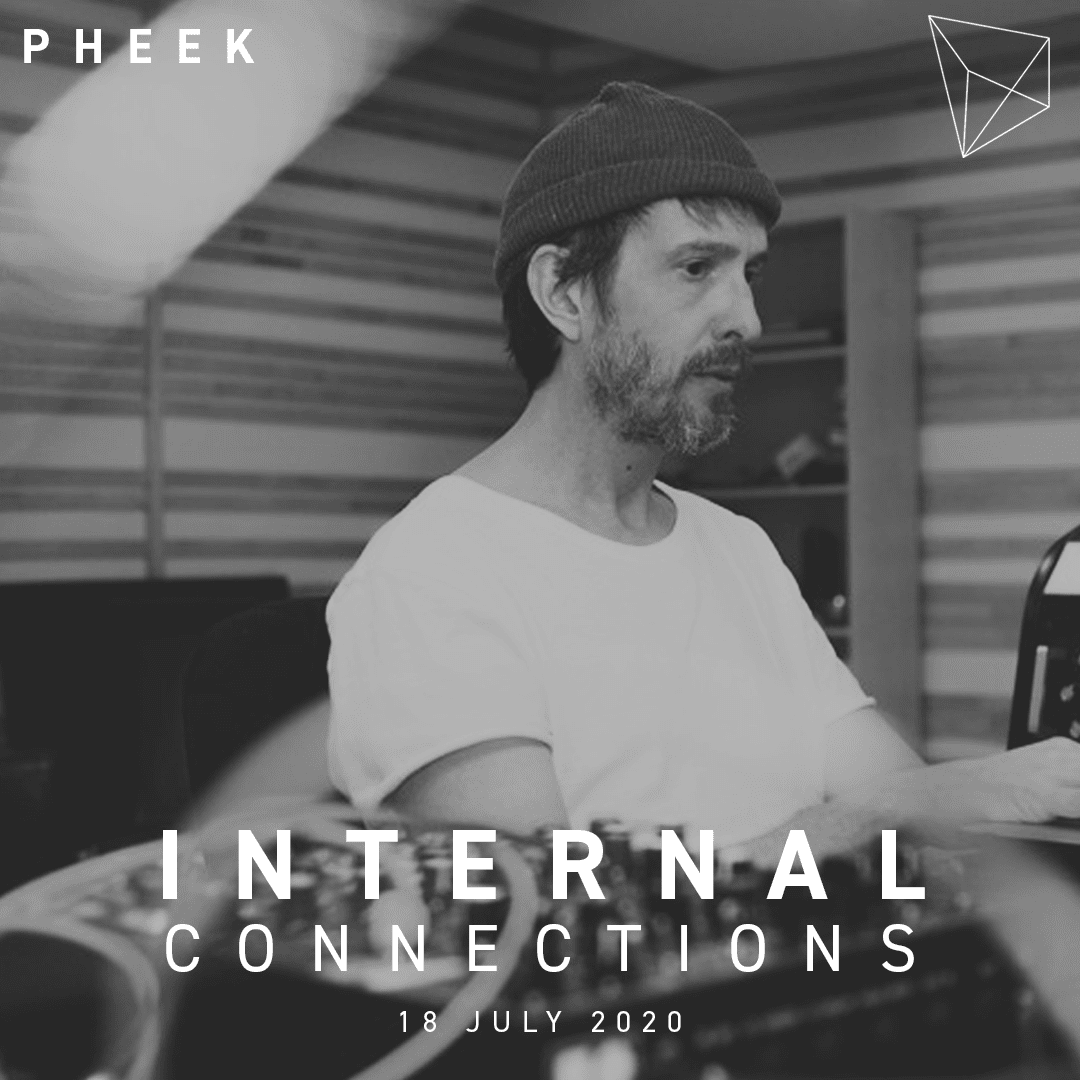 Joing the US line up this weekend is Pheek. First taking interest as a sound enthusiast, Montreal’s Jean-Patrice Remillard began exploring electronic music in earnest by the early 1990s, teaching himself how to produce and manipulate sounds with software and hardware. A prolific producer, Pheek had produced two critically acclaimed full-length albums by 2002 and has since released on legendary labels including Richie Hawtin’s M_nus imprint, France’s Telegraph, Denmark’s Tic Tac Toe and Germany’s Contexterrior. Pheek also founded the cult netlabel Archipel in 2004 swiftly followed by sub-label Kalimari, both of which gained the support of key players Sven Vath and Matthew Dear who included releases on their mix CDs “The Sound of the Seventh season” (Cocoon) and Fabric 17, respectively. 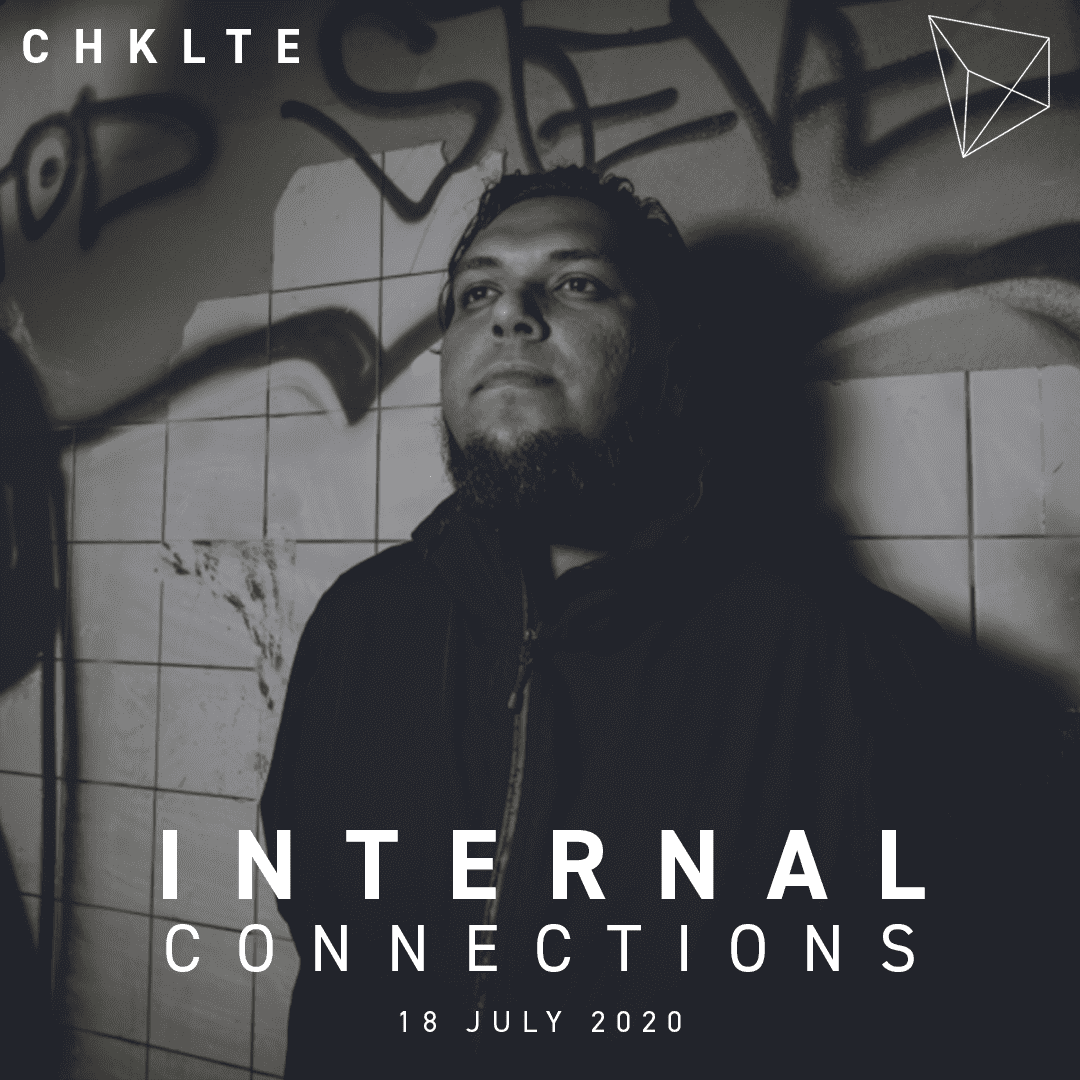 Chklte is the alter ego of Jonathan Lopez who began his musical journey at 15 years old by sneaking into South Texas clubs to DJ after only a year of studying online tutorials and digging for countless hours through music. Six years later in 2012, he became a resident of Austin TX and quickly became a guest at much respected local venues. These days, CHKLTE is now based between Europe and Texas and is one of the resident DJs behind the infamous Blacktone party, regularly hosting artists such as Voigtmann, Praslesh, tINI, Herodot, Priku, Alci, Afriqua and many more. CHKLTE also has a series of releases on many renowned labels and regularly ventures around the globe to play the likes of ADE Festival in Amsterdam and Club der Visionaere in Berlin.

Making his return to Internal Connections is Ruslan. If you caught him rounding off Saturday for part 1, you know what you’re in for. Non-stop groovers and heavy hitters from the MINIM Records boss.

“This Saturday we are at it again Part 2 of Internal Connections live stream. 24hours of music with Leftback, Curtea Veche, MINIM Records, ubiyu, OGE and more hosted by FEEDER.ro My pleasure to join the group of friends from all over so tune in on the 18th.” – Ruslan 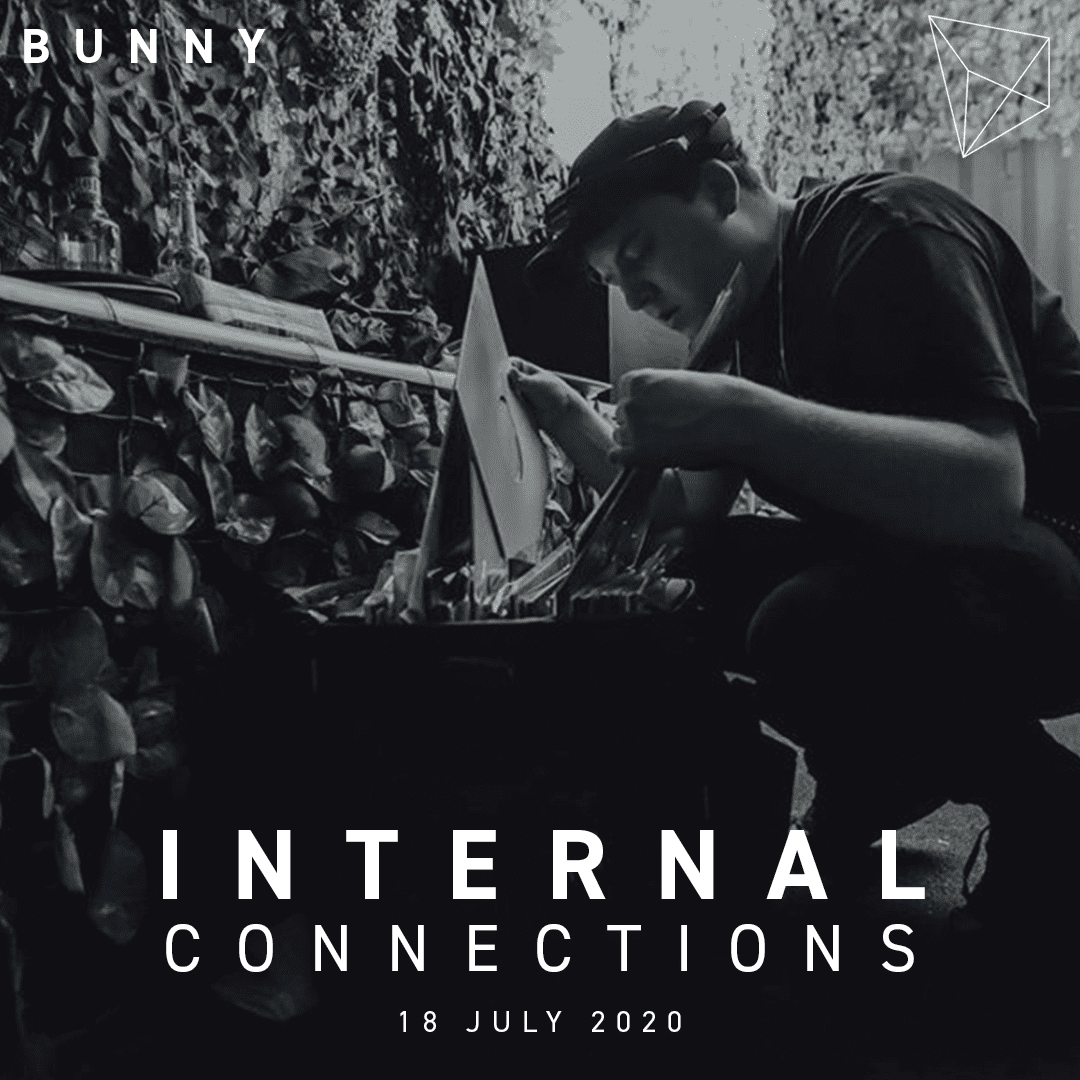 Part of the UK line up, Bunny has been selecting records as part of Birmingham’s underground scene for over a decade. Known for his stripped-back productions, he is resident of the popular nomadic after-hours Social Underground, the daytime event PENDA and a Leftback regular. Bunny has been invited to play at some of Europe’s most notorious venues and events including Gazette Cluj, HOME – London and Mint Club.

Roya Brehl, based in Leeds, is a resident at The Off Licence and Schwein, playing and hosting events at venues such as Wire, 212, Distrikt Bar Leeds and Outlaws Yacht Club. Last year Roya played at Beat Herder festival and began work on a new venue and studio space, The Imaginarium. She is also working on a new label and mix series, Hideous Things. Roya also plays a weekly show on 99.9 Emergency FM – Tuesdays 6-8 pm. 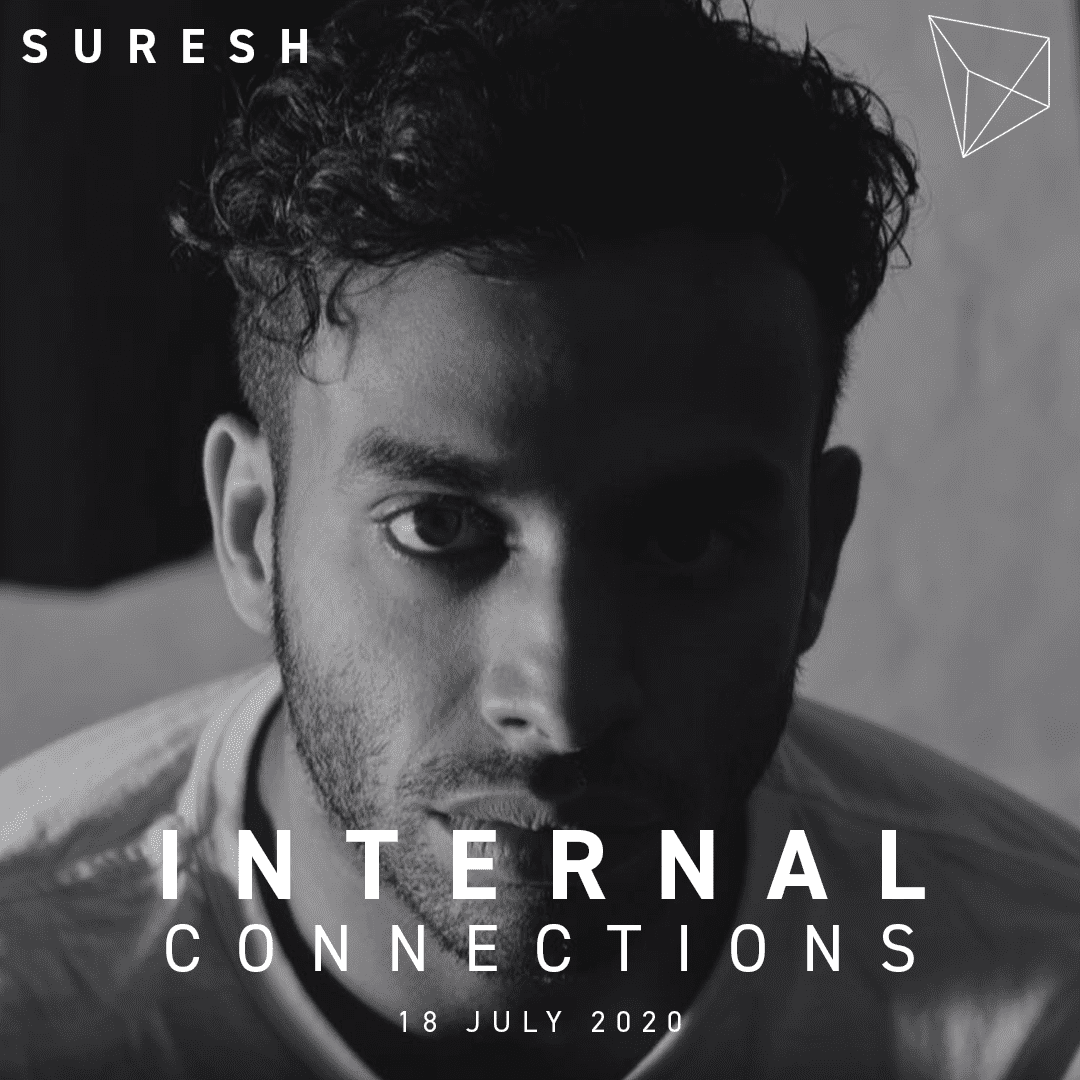 Originally from Leeds, Suresh runs a successful and popular night Whynot?. He has built a solid reputation in Leeds as a gifted selector, his delicate mixing style and keen ear for detail along with rolling sets leaves something not to be missed. As founder and resident of WHY.NOT? Suresh has hosted parties at Distrikt, 212 and A Bar Below inviting guests such as Politics of Dancing, Stewart Hawkins and Bobby O’Donnell.

Here you can watch the 22 videos from the previous edition.