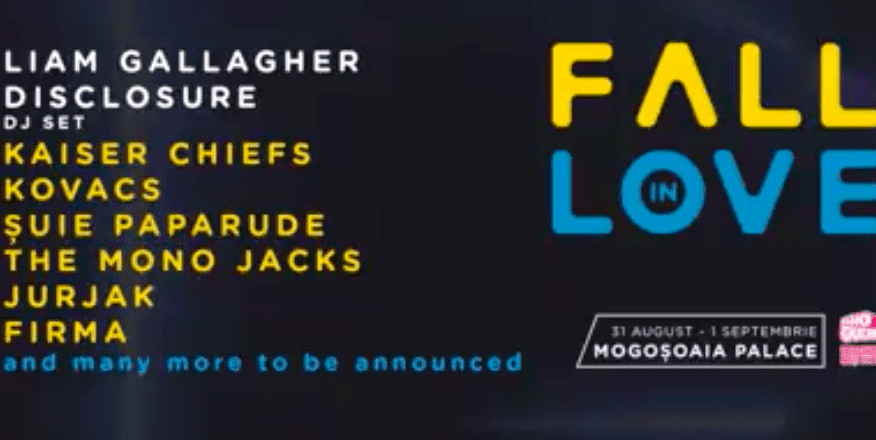 Fall in love with:
Liam Gallagher – the Oasis legend, who will perform for the first time in Romania, at Fall in Love Festival. Besides the „bad boy” trademark and energy, Liam will perform at Fall in Love not only new songs like „Wall of Glass”, „For what it’s Worth” or „Paper Crown” but also other surprises picked from the Oasis repertoire.
Disclosure (DJ set) – one of the revelations of the international electronic scene and one and of the one of the most asked for bands from the music industry will Fall in Love with the Romanian audience. The English duo will certainly “Help me lose my mind” in the magic scenery of the Mogosoaia Palace.
Kaiser Chiefs – are returning to Romania to make all music lovers dance. Since their start, the band brought to life over 30 singles, among which the well-known hit „Ruby” (2007) and went on the stage of some of the largest stadium concerts and international music festivals. This year, it’s Fall in Love Festival’s turn.
Kovacs – one of the richest and most powerful blues and soul voices of our time comes at Fall in Love. The shaven-headed chanteuse hiding the voice of a soul legend beneath her fluffy bear hood, Sharon Kovacs is an enigmatic phenomenon who will sing to us about the light and shade of modern relationships, talking about a series of confessionals about wild love and abusive romantic webs, about hedonism and addiction, which follows every young person’s rough emotional rollercoaster evolution.
Șuie Paparude – is one of the most popular and long lasting Romanian bands that has written an important chapter of the Romanian electronic music, being also being the first high profile Romanian act that decided to make their album available online, free for download.
The Mono Jacks – alternate between alternative rock and post-punk touches and define their work as a collection of thoughts and feelings in musical form. Whichever of the bands’ musical pieces you’ll listen, you’ll easily get entranced watching their thoughtful, energetic live shows and their rawness, encapsulated underneath a layer of pervasive melancholy, will captivate you.
Mr.jurjak – one of the rising names on the Romanian music scene, is the musical project founded by George Petroșel, the talented son of Edi Petroșel, drummer of the well-known Romanian band Holograf. His debut album entitled „Lemon Blues” was welcomed with enthusiasm by the local market and was followed (end of 2018) by a second one, entitled „Blues Berry”.
FiRMA – is one of the iconic rock bands of the Romanian alternative rock scene. With three nominations at the MTV European Music Awards, a second exciting album released in 2007 and a collaboration for the live soundtrack of the play „Desteptarea primaverii” at Teatrul Mic in Bucharest, the band is keeping a high creative shot.