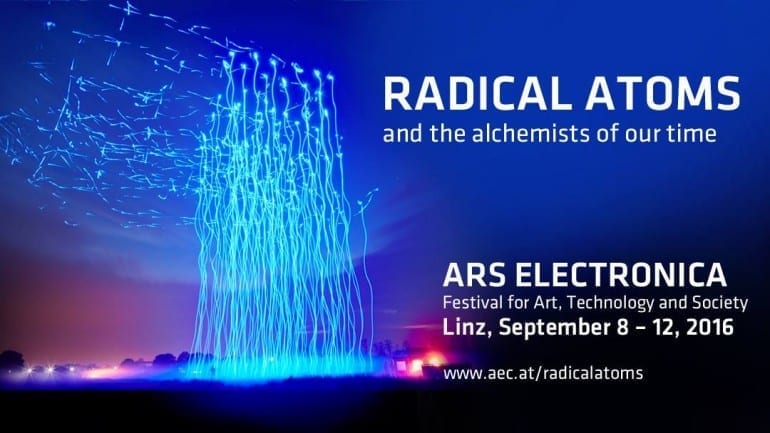 Each year’s Ars Electronica Festival program features a colorful palette of event formats and offerings in Linz. The spectrum ranges from conferences and speeches to exhibitions, concerts, performances and interventions.

“RADICAL ATOMS – and the alchemists of our time” is the theme of the next Ars Electronica Festival September 8-12, 2016. Hundreds of artists, scientists and engineers from all over the world will be convening for speeches, panel discussions, projects and prototypes, workshops, performances, interventions and concerts staged over five days at multiple locations in downtown Linz. The organizer is Ars Electronica, a wholly-owned subsidiary of the City of Linz, Austria; co-organizers are the ORF–Austrian Broadcasting Company’s Upper Austria Regional Studio, the Brucknerhaus concert venue and the OK Center for Contemporary Art.

While cultural and social turbulence in the wake of the Digital Revolution still confronts us with substantial challenges, a new generation of creative scientists and engineers has long since gone a step further. They have joined forces with artists and designers and are amalgamating the virtual world of data with the physical world of our bodies. They’re using bits and atoms to fabricate substances and materials with completely new characteristics. Due to these creators’ unorthodox methods and, in many instances, fantastic visions, they’re arousing an uproar that’s comparable to the response that greeted the alchemists of bygone days and their mysterious experiments. The 2016 Ars Electronica Festival will spotlight this phenomenon and do so together with some world-renowned associates. Serving as scientific advisor to this year’s theme symposium is Hiroshi Ishii of MIT Media Lab in Boston, and the theme exhibition is being curated jointly by MIT and the Ars Electronica Futurelab. The 2016 Festival Campus will feature Peking’s Tsinghua University, considered one of China’s best institutes of technology and the natural sciences, and a member of the C9 League, an association of the country’s nine most prestigious universities.