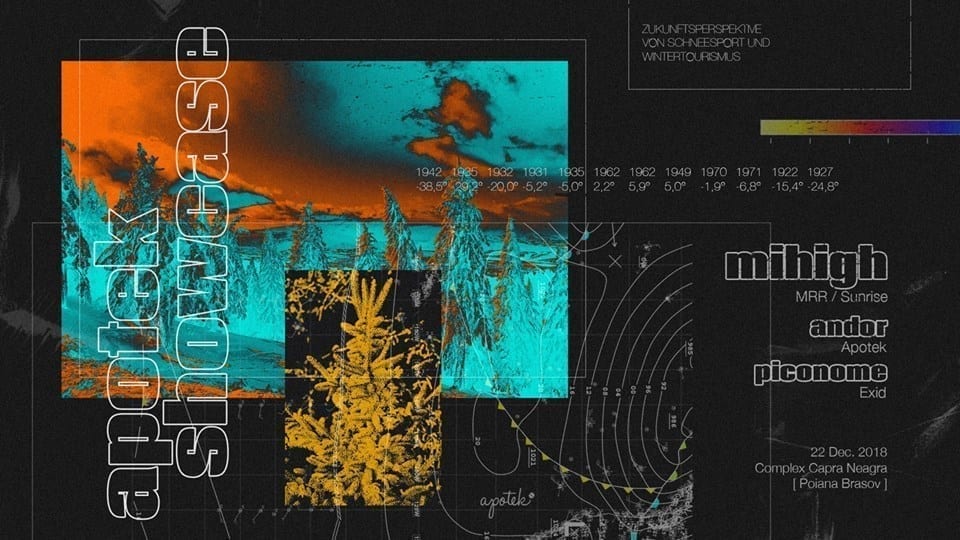 MIHIGH is the resident of Club Midi starting 2007 and defines his stuff as ‘dirty old school underground music’. Equally playing minimal house and techno, in the deepest way around, Mihigh is able to offer a different vibe to each party.

Music defines perfectly Mihigh, distinguishing itself through a unique style of story in constant development. With minimal influence in a more profound way and techno equally, Mihigh combines the new with the old, putting his distinctive mark of obscure, hypnotic sounds.

He is a key member of major Romanian festivals like Sunwaves, Mioritmic and many more.
The love for good music led him to the founding of the label Midi Records Romania, a platform that promotes art and passion going on quality and not quantity.

Piconome is the resident of Exid and also Apotek who in the last couple of ears impressed us with his skills and devotion for the underground music scene.

Andor, member of Apotek crew.
This will be his 2nd appareance on Apotek Christmas party, he will play some colourful undergound tunes with an emphasis on rithm.

… and we almost forgot…because it’s Christmas, Santa will make us a small nice gift and we gonna blow your ears with nothing else just a Funktion One Sound System !

Get your shoes ready and let`s dance !!

*AT THIS EVENT SMOKING IS NOT ALLOWED !
*In order to keep a friendly environment the club holds the rights to select the customers, only 18+ allowed!
*The venue has limited capacity, therefore first come first served policy will take action