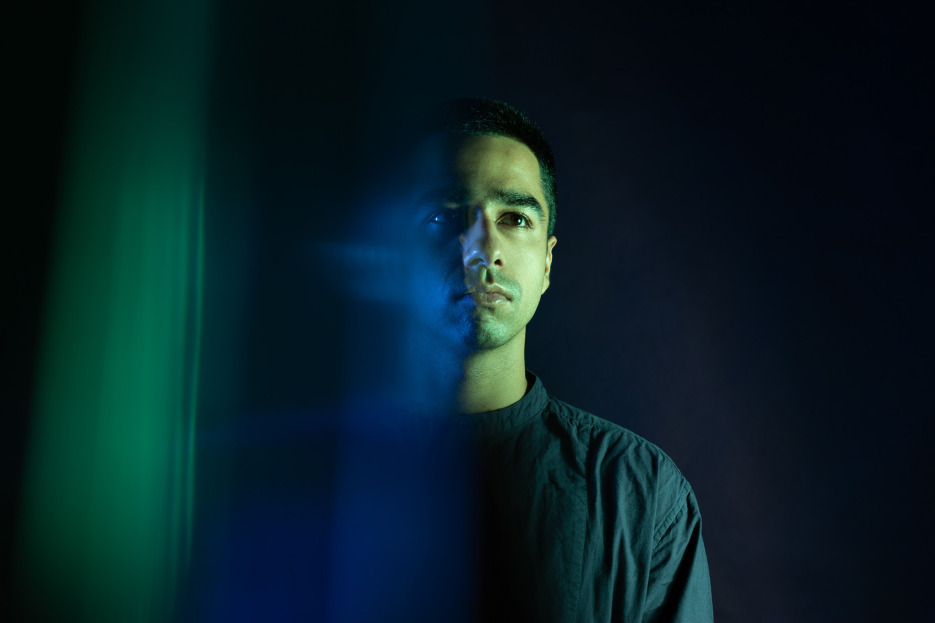 New Delhi based Vridian recently showcased his sound on Qilla Records with an eclectic four tracker, blurring the lines between deep minimal and techno, proving his versatility once more as a jack of all trades in the studio. You may also be familiar with him via his output on other labels such as Manjumasi, or his vast amount of gigs on the road in his native country. Let’s see what went down when we recently caught up with the unbelievable talent, this is… VRIDIAN!

Listen to the “Khyber” EP: https://vridianmusic.bandcamp.com/album/khyber

f: Thanks for speaking with feeder.ro today. Let’s kick things off with your recent ‘Khyber’ EP on Qilla Records. This is your most minimal leaning sound in your catalog, does this mark a new sound for you in the foreseeable? What made you focus on this sound?

Vridian: Thanks for having me, team!

Amongst my producer friends, there is always a talk of making more effective parts with lesser channels. So it’s always in conversation to achieve a level of efficiency with lesser parts that are more robust and full of movement. When I began writing this EP, that was the main challenge I gave myself. Earlier on, it was easy for me to just write a new part or add a new element every time I felt the track was getting stagnant – but I didn’t allow myself that privilege this time.

Most definitely don’t know about marking a new sound, but it’s sparked a new workflow for me – which I feel comfortable with for the time being. I guess that will change certain things about my sound, but you never know!

Vridian: I think it’s been a long time coming. I was mesmerized with minimal house from Romania in 2016 when I heard Herodot and Topper in Vancouver. Of course, I was inspired by Micro House as well – which I feel is the earlier form of today’s more modern sounding ‘Rominimal’. Along with this, the deep and hypnotic techno these days has also caught my fancy – from labels like Hypnus, IO & The God’s Planet. It makes me feel that this EP takes a bit from both those worlds.

f: Do you have any particular artists who inspire you within that sound?

From the deep techno space, it would have to be names like Feral, Primal Code, Luigi Tozzi, Polygonia, SHFT, Midnight Traffic, and Ness. I was a big Goa head and I find this music to be extremely psychedelic (in the true sense of the word).

f: When you hit the studio, where do you normally start? What set up are you currently operating with?

Vridian: My process keeps changing from time to time. Of course, there is no fixed starting point.

Over time I’ve realized the best approach for me is to make sense out of nonsense. So it’s often just noodling or mucking about on plugins. Long and aimless jams with a bunch of real time modulation. I then listen back to these to see if I can identify any parts that feel good – then its cutting, chopping and arranging. I like to add the sensible elements later (pads, chords, sequences etc). I used to make the drum grooves fast, but found that it took so much space in the spectrum – which was limiting me in terms of other compositional elements.

My DAW of choice is Ableton Live 11 – it’s been my first love since 2016 or so. Along with this, I have an Antelope Audio Zen GO Interface, with Hedd Audio monitors. Currently, I’m hooked into the box and exploring Max For Live from Ableton – they are exceptionally intuitive tools. I recently let go of my Korg Minilogue & Moog Grandmother. I’m still scoping out my next hardware acquisitions, but it feels like I’m heading back into wanting that hands on vibe again. I use an APC 40 currently for more human modulations and just as a control surface.

f: Do you often collaborate with other artists in the studio? We noticed here you have worked with atish, are there many artists out there you aspire to work with?

Vridian: I truly believe there has to be a natural connection with any collaborator. I’ve tried a bunch of random collaborations in the past and they have not turned out as planned. In addition to this, I take time to construct parts and my process involves a lot of clicking and editing. So if the other person is patient with me then we are on (haha). Atish has been very supportive of me for some time now and has signed two solo EPs from me. When he checked in to see if I would be down to do an EP together, it was extremely encouraging. Manjumasi as a label had become home and I had developed a nice equation with Atish & Mark – so it felt right too.

Another person I regularly collaborate with is my close friend Jay Pei. We even have a live project called ‘Parallel’, that appears and disappears at random. I would definitely like to work with the same artists I mentioned as answers for question 2. All of them are pure class.

f: Growing up and living in India, where do you draw influence from as an artist? Do you think the rich culture is translated in your sound?

Vridian: I have felt most impacted by my time spent in the Himalayas here. I feel like access to these ancient and majestic mountains is one of the greatest gifts that I could receive from the motherland. I have been there in different formats. As a trekker, a ‘raver’, as a tourist – each time I have come back enriched. Life is different there and the silence is deafening. I often tap back into various memories I have from being there from different phases of my life.

The variety of culture here is inspiring and it shapes me as a person – but there are no sonic hints of it in my music. As a musician, I’m more of a global citizen. I don’t necessarily enjoy adding obvious Indian elements into my music – but I was born and raised here so it definitely has its influence on my personality.

Vridian: The question that always makes me question my productivity (haha). A couple of bandcamp only releases are in the works for this year. Apart from that, Atish and I recently released our record ‘Instant Transmission’ earlier in 2022 and 2023 should see a colorful remix EP see the light of day. I can’t mention much more about it yet, but I’m excited for that package to be released because there are some exceptional artists on board for it.

I also just had the first run of my club residency ‘Don’t Feed The Animals’ at Summer House Cafe in New Delhi. It was immense to get the opportunity to make the club look like the themes we were exploring (circus, forest and swamp for each of the editions), let alone exploring my different musical interests. I hope to take it around the country some more.

In terms of new music, the experimenting continues. It’s back to the lab for now.

f: What can our readers expect from you as a DJ, can you describe your sound for us? And where did the name VRIDIAN come from?

Vridian: I enjoy music separately as a DJ and listener. One could say I have a split personality disorder in that sense (no offense or insensitivity intended to those who actually do). It’s quite awesome actually because it has relieved me of the pressure that I have to actually play everything I might like to listen to. Not necessary at all. As a DJ, I have a bunch of styles I like to represent or showcase. I literally download everything that I feel has an impact for the floor. The fun for me lies in situationally presenting it when DJing. As long as the mood is appropriate and energy is intact – I will play it.

The fun for me also lies in finding mixable elements in genres that one wouldn’t usually put together. What’s amazing is that when I crack this kind of a mix, it mostly feels like it’s from the same musical space.

‘Viridian’ is a man made pigment mixed in with the colors of blue and green. The project actually began as a duo along with my close friend ELM, who is an Indian producer based in Berlin. The idea that two entirely regular looking colors (one of them not being primary) can come together to create something new was the initial inspiration behind the name. It’s also the name of a forest in Pokemon and a star system in Star Trek. I simply knocked off an ‘I” in the spelling to distinguish it from the regular world.