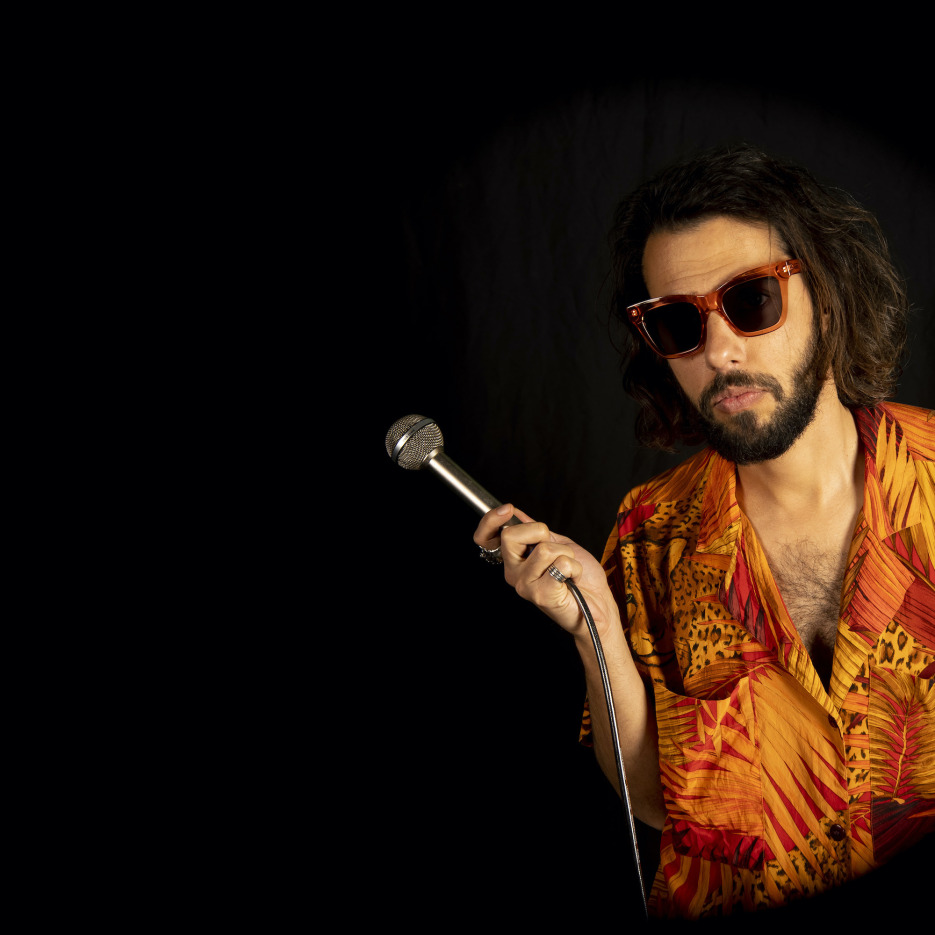 Katorzi: I got my first guitar when I was 15, and learned how to play it from my cousins and uncles. Then a couple of years later I started writing some stuff and recording them on cassette tapes, making overdubs and all that, it was a lot of fun. Then I spent two years at a conservatory of music in Sao Paulo, from the age of 19 to 21.

Katorzi: It was a compilation called Top Surprise, in 1994. It included Ace of Base, 95 South, Double U, and some other hip-house and euro-dance stuff that was on the radio in Brazil at the time.

Katorzi: I usually say I make funk & disco, with lots of afro-Latin percussions. But I also make house sometimes, and when you blend all this and add drum machines, like I do, something like ‘nu-disco’ comes out. My sound is not very ‘electronic’, there are always live band elements in it.

Katorzi: As a teenager in the late 90s, I listened to a lot of Grunge, but I don’t think it influences me much nowadays. Then in my 20s I started listening to a bit of funk, my guitar playing was definitely influenced by John Frusciante (though nowhere near his brilliance)… but it was only until my mid-30s that I immersed myself in funk and disco. For me what has excited me the most was discovering afro-disco music. Thanks to labels that have unearthed and reissued insanely fantastic music from Africa (Soundways, Kalita, Mr Bongo, Soul Jazz, etc).

Katorzi: My first release as Katorzi was Skidum, an old samba reworked to the bones as a modern nu-disco tune. It was out on PuzzleProjectsMusic in April 2021. My first release ever, was back in 2006, with a rock band I had in Sao Paulo, which shall remain unknown.

Katorzi: Probably The Funk Is Real. It was quite difficult to mix, as it’s got so much going on. I often write a song in a couple of hours, and create all the parts very easily, recording them as I improvise over the main groove. The actual labour is then spending weeks or months, editing, arranging and mixing.

f: You’ve just released your brilliant ‘The Funk Is Real’ EP on PuzzleProjectsMusic, what can we expect to hear across the 3 tracks?

Katorzi: Expect party vibes, of the funky, live-band-ish, block-party type; 118 to 122 bpm. Some people say this EP is a bit off-the-wall for ‘nu-disco’, but that’s the point, to try and have less obvious progressions. Though to be honest for me it’s not that wacky… maybe because I made it. I think what I most want is firstly the obvious, that people can have a good time when they hear it. But also, that it can be appreciated at a musical level because there are many nuances I worked really hard to get there.

f: Do you play all the instruments yourself and were you classically trained?

Katorzi: I tried to make a point to myself as a musician that on this record I would play everything. That was guitars, bass, synths & vocals. The drums are programmed and the percussions were arranged from samples, since I can’t play them.

f: Have you got a favourite track from the EP?

Katorzi: Funk Machine, I’d say. I think it’s because of the lyrics. I’ve only recently regained my long-lost confidence as a songwriter, it’s something quite challenging for over-thinkers like me, and I think that Funk Machine says how I most deeply feel about music at present in a sort of spiritual way. “Trust the beat, trust the bass, believe in the funk machine”; the machine being one’s body.

f: How did you approach putting the EP together?

Katorzi: I wanted it to be a more real expression of who I am. It was fine for a while to do edits and sample vocals for my tracks, but in the end I had this urge for self-expression that could only be appeased if Katorzi was the artist, and not only the producer, if that makes sense. Once that was clear, I began jamming and recording with a close attention to how I felt in the process, how true to myself I was being, and if that was a good enough artistic expression for me to have my face on – and it felt extraordinary. From then on I decided to approach all my records like this.

f: What’s your studio set up like and what’s your favourite piece of kit?

Katorzi: I have a humble studio in Bogotá, called Pepis Lounge, here I’ve got a pretty decent rack of analog gear for recording, mixing and mastering. My favourite being the SSL Fusion, which I use for analog warmth and colouring as the last process before wrapping up the pre-masters. My absolute love and joy in the studio is my Fender Mustang Bass and a Fender Jaguar, I can’t live without them.

f: You’re based in Bogotá, how is the dance music scene there now and who else should we be on the look out for?

Katorzi: The scene is very much techno-orientated, with all shades of house music as well. I’m not overly excited about it to be honest, mainly because it’s hard to fit in with the music I make. I’d probably need to live somewhere warmer and funkier. Having said that, there are a handful of underground spots I absolutely love (VideoClub, Paradisco, Espacio KB), where you’ll find more eclectic music, and a more open-minded public, which is good for more risk-taking DJs as well. I always recommend checking out my good friends Jonahlo and Joint4Nine. They are the best house music producers and DJs around.

f: Who are you 3 favourite Funk acts?

Katorzi: I’m finishing up producing my next releases on PuzzleProjectsMusic and the sister label Hot Groovers, which will probably come out next Spring. One of them is called Woozy Feelin’, it’s got some bluesy riffs in it, and an off-the-charts Sax solo. I was lucky enough to be recording with some session musicians in Medellin a few months ago; producing some Rhodes piano and brass sections for my next records.

‘The Funk Is Real’ EP will be released on Traxsource promo November 11th / Full release November 25th 2022 on PuzzleProjectsMusic.