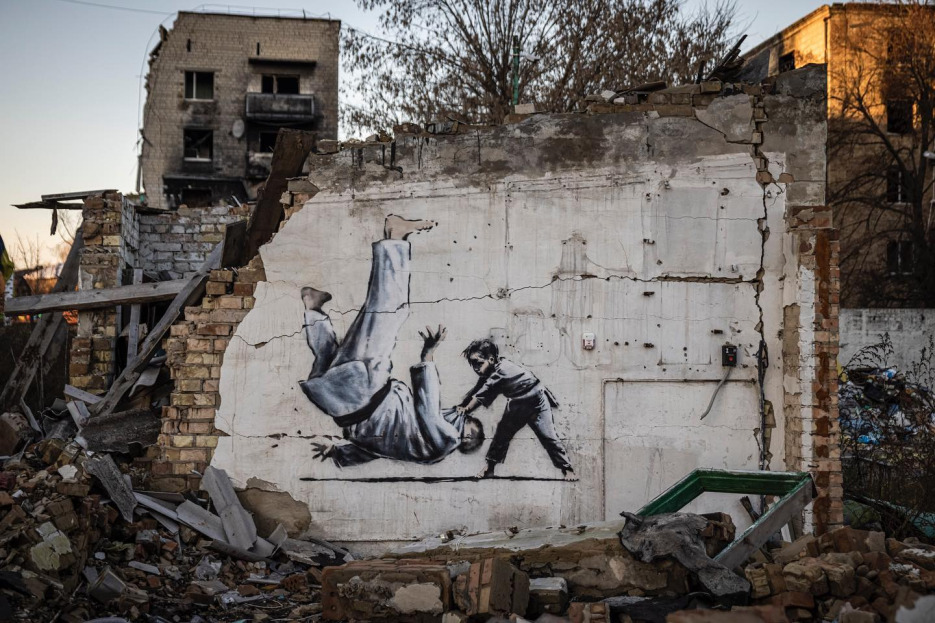 For a few days, the entire internet is talking about whether there is any possibility for Banksy to have painted a few artworks in Ukraine. After many rumours, debates and doubts, it seems like Banksy visited Ukraine trying to raise awareness about the difficulties that Ukrainian are facing and to give them a little hope through a series of strong messages embedded in his recent works, painted around Kyiv.

“Another small piece by @banksy has been documented in Ukraine. This time the improvised piece incorporates an existing piece of classic graffiti, the good old cock and balls and turns it into a missile launcher, creating a potent symbol of the machismo of war.”

“It turns out that I shot the work of @oleksiisierik a week ago, when I was preparing a report from the village of Gorenka for @mila_potapova07 together with @banksy and @saveukraine.ngo“

Banksy in Hostomel near Antonov Airport in Kyiv Region, Ukraine 2022 photo by Ed Ram for gettyimages

“Spotted just outside Kyiv in Hostomel amongst some of the very badly damaged buildings next to Antonov airport. Hostomel was the site of some of the fiercest fighting in the early days of the invasion which locals are now trying to re-build @banksy #banksy #streetart #warartist #stencilart“

Ed Ram, a photojournalist and reporter in Ukraine, managed to document Banksy‘s paintings and share them on his ig and fb pages with the following description:

“Graffiti of a woman in a leotard and a neck brace waving a ribbon is seen on the wall of a destroyed building in #Irpin in Kyiv region.

In #Borodyanka, further out from Ukraine’s capital city, graffiti of a woman in a leotard doing a handstand is painted on the wall of a destroyed building.

Similar artwork in Borodyanka and Kyiv has sparked online speculation over whether the graffiti artist Banksy has been working in Ukraine.

**Update: @banksy has shared the work on the third picture on his instagram page**

Irpin saw heavy fighting in the first few weeks of the conflict and Borodyanka was occupied by Russian forces and hit particularly hard by Russian airstrikes.

“Graffiti of a child throwing a man on the floor is painted on a wall in a residential area of Borodyanka, a town that was partially destroyed at the start of the conflict.

I wonder if it might be a #Banksy or an imitation?

Russian President Vladimir Putin, who was a black belt in Judo, was removed from his position of honorary president of the International Judo Federation (IJF) in May.

Borodyanka was hit particularly hard by Russian airstrikes in the first few weeks of the conflict. Electricity and heating outages across Ukraine caused by missile and drone strikes to energy infrastructure have added urgency to preparations for winter.

On feeder.ro, you can find a long series of articles about Banksy, and a list of Banksy movies and films he released between 2009 to 2020. We highly recommend you watch them and see the evolution of one of the most active and relevant artists of our times.

1 thought on “Banksy in Ukraine (update)”