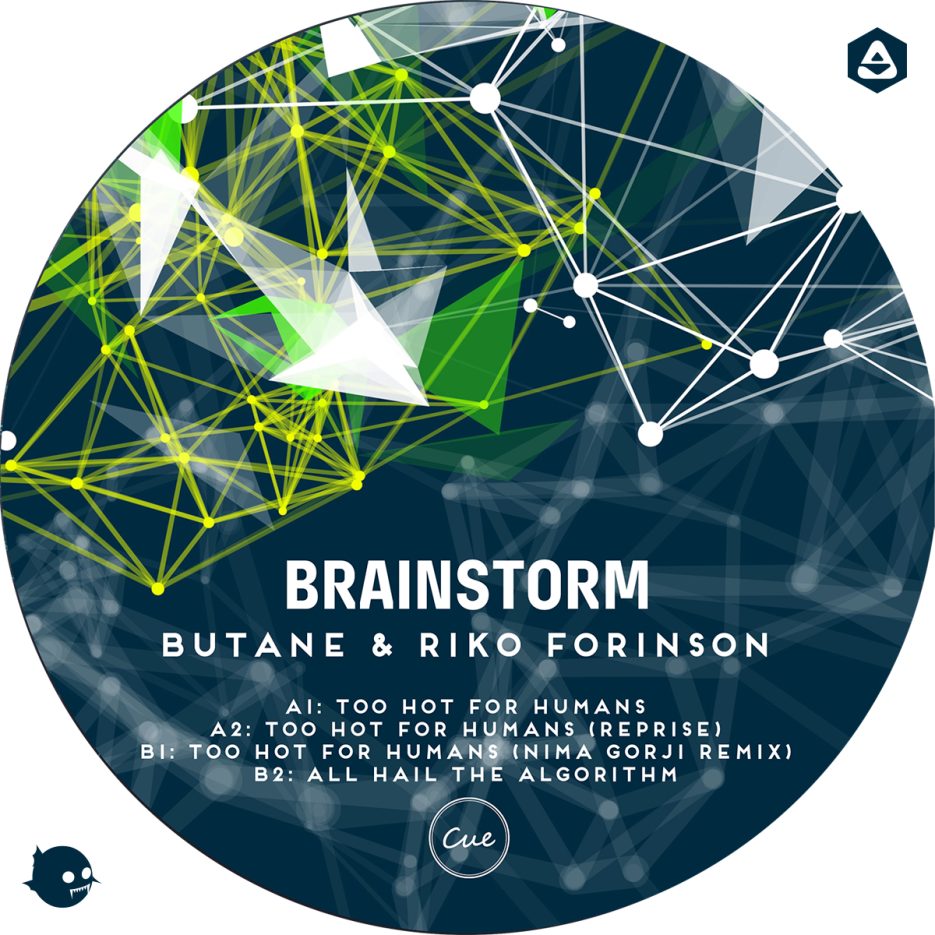 The next release in CUE Music‘s catalogue sees Butane teaming up once more with Riko Forinson for “Brainstorm” EP alongside Nima Gorji on remix duties. The record definitely adds extra magic to the label’s discography, lining up to the previous releases from Elchinsoul, Sascha Dive, Sascha Sonido, Danilo Schneider, Dubphone, Heerd and label head Sven Jaeger, among many many others.

A firm believer that the long hours of studio work keep a musician grounded, Butane boasts an impressive discography, released by some of the most highly regarded labels in the business, such as Crosstown Rebels, Sci+Tec, Hottrax, Fuse Records, Lauter and Get Physical. As a label owner, he’s the founder of three influential underground dance music imprints of his own, Alphahouse, Little Helpers and Extrasketch.

Riko Forinson is an Italian artist passionate about the sound of drums and piano which he studied intensively from an early age. After a while of exploring the acoustic dimensions of music, he immersed himself in the world of digital electronica, performing as a DJ at various events and releasing with labels like Orpheus Recordings, Lucidflow, Dushe Label and Bar 25 Music. Nowadays he’s an author, composer and producer who loves to play with various techniques while integrating jazz, reggae or classical aspects into his compositions or sets.

In charge of the reinterpretation of the title track, Ibiza-based Nima Gorji is well-known on the international scene, with a career that spans more than three decades. In 1999 he founded Welt Recordings followed by NG Trax and Need For Sound, relentlessly following his passion for electronic music by releasing numerous personal works as well as promoting other artists. His rich discography includes materials published through labels like Sci+Tec, Deeperfect, Fuse London, Bondage Music, Out Of Orbit, Love Letters From Oslo, Indigo Raw, Out Of Orbit, Cocoon, Murmur, Natural Rhythm, Bla Bla Records, ÉTÉ, BodyParts and Melodeum.

“Too Hot For Humans” reveals an uplifting composition designed with a pumping rhythm that’s smoothly complemented by a prominent bassline, ever-evolving arpeggios, twisted effects and an electric vocal sample that adds extra flavour to the whole journey. The arrangements and the breakdowns can easily remind one of old-school acts like Kraftwerk, where the listener is teleported into cosmic dimensions of electronica. The “Reprise” version of the track is focused on the background textures and patterns of the title track while Nima Gorji’s Remix transforms the track into a breezy minimalistic groover with smooth progressive aspects best fitted for laid-back selections. The closing track “All Hail The Algorithm” drops an equally energetic affair, rumbling through the frequencies with style and making this release a must-have for selectors and collectors alike.

Here’s an inspiring perspective from Butane about electronic music and his work:

“I really hate talking about my music. I prefer to allow the listener to be a blank canvas, so they can reach their own conclusions. I think too much talking and stories from an artist steal something from the viewer. I’m a craftsman. I make music for people to experience, just like a carpenter makes a bench for people to sit on. If the bench maker tells the customer that they can only sit on the bench, then what about the person who wants to lie down on it, or use it for a table for his plants? It’s the same for me with music. If I tell too much backstory about the piece, the listener already has some preconceived idea about it and will alter their perception of the music. I prefer to let the viewer create their own story. This is the essence of techno for me. Ahh! This reminds me of one of my favourite quotes by Marcel Duchamp: The creative act is not performed by the artist alone; the spectator brings the work in contact with the external world by deciphering and interpreting its inner qualifications and thus adds his contribution to the creative act.”

Pre-order your copy of Brainstorm EP from deejay.de.