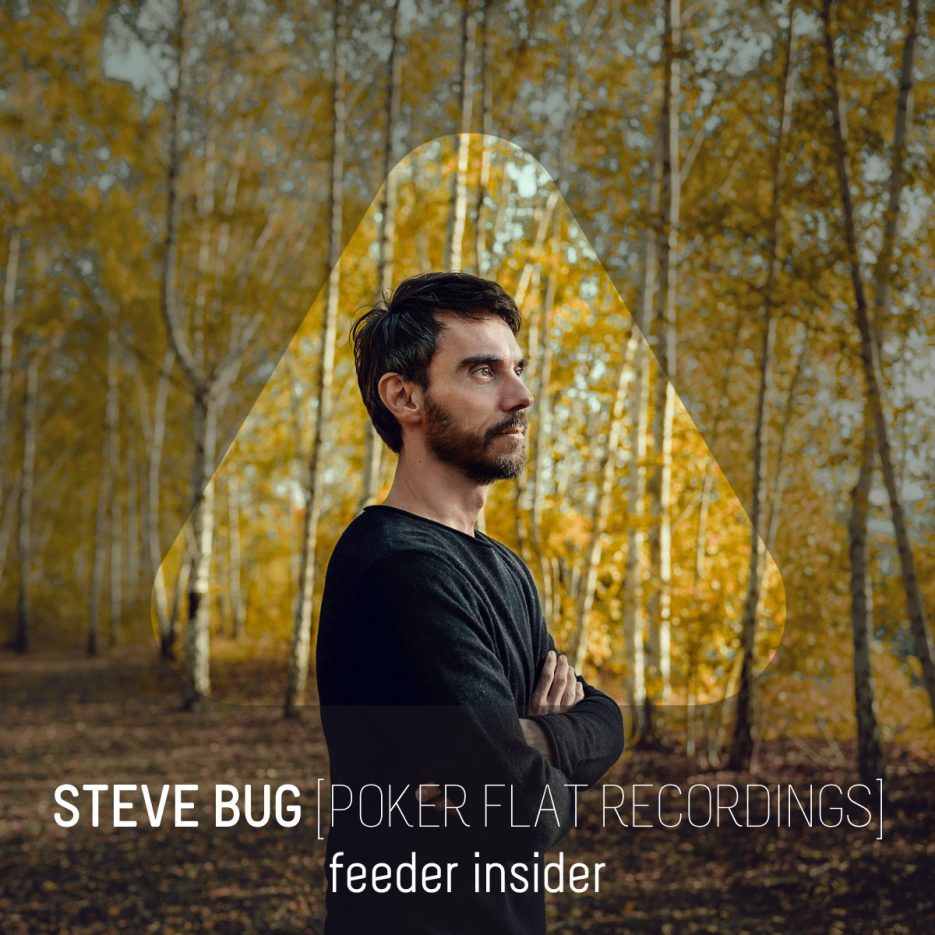 Steve Bug is one of the worldwide electronic music scene’s true pioneers and forward-thinking artists. His relentless commitment to quality, reflected both in his own work and in the many producers he has championed, has made him one of the most revered artists and curators, rolling along with his labels Poker Flat Recordings, Sublease Music, Audiomatique, Dessous Recordings, Traffic Signs or Raw Elements. Throughout time, he made a sizeable contribution to building the European house and techno scene as we know it.

Over the past two decades, Steve has been nurturing his imprint Poker Flat Recordings into one of Germany’s most notable record labels, releasing eight albums and countless EPs whilst holding down an impressive career as a DJ as well.

Recently we published an outstanding set recorded by Steve Bug for feeder sound, and it is such a big pleasure to have the chance to exchange a few ideas with him about the current state of the electronic music scene. Read the feeder insider extended interview with Steve Bug and find out the full story and get some behind the scene info about his latest EP released by AUS music that features two impressive collaborations with Mr. V & Cinthie.

feeder.ro: Hello, Steve! It is a pleasure to have you as a guest on the feeder insider series. How do you see the world, especially the club scene, in the post covid era, and what are the main ideas that stocked in your mind during all these restrictions?

Steve Bug: Unfortunately I don’t think much has changed, at least not for the better. Some clubs didn’t make it through the pandemic, others still struggle with the damage these two years have caused. Many artists had to get proper jobs to pay their monthly expenses. Some haven’t gotten back into making music. Many clubs, but especially festivals still have bookings open from the time, when the pandemic hit us. So lineups are still the same as before. And they probably will stay the same in the future. In my opinion, we are at a very unhealthy stage, almost similar to capitalism: the ones on top will stay on top, and will continue to get even more bookings and higher fees. Electronic music is now a part of the pop culture, and I think that most people in the crowd don’t even truly know the artists to who they are dancing to. New music is provided by algorithms and some playlists, that mostly includes only music by artists that are already big.

Many of the huge festivals would sell out without announcing a single artist, that’s how big their brand is. Yet they book the same lineups as every other festival. They could at least add a few smaller artists to their lineups to help educate people and show them new, or unknown talent. I mean, how many of the same festivals can one go to, before you become tired of it?

And clubs suffer from people saving their money to visit a few festivals per year. Some clubs feel the need to compete with the big festivals by also booking the same artists, as they think that’s what people wanna hear. But the fees are too high to make the money back at the door. Also, all the other clubs around are trying to do the same. And the weekends they ‘only’ book smaller artists, people might stay at home with empty pockets, because they had to pay a higher entrance fee for the superstar deejay.

There are only a few clubs that have a vision, and who manage to create something special, something that’s not easily exchangeable. And that’s what more clubs and festivals should go for, being special, different from the others: it will pay off in the long run. And I know that there are still many people out there who are truly interested in the music and in experiencing something special.

f: Your recent collaboration with Aus Music materialised in an intense release titled Back to 95. Mr V tells the surreal story of the beginning of house music, describing some of his memories and some beautiful moments days back in the days. We are curious to find out what caught your attention about that period?

Steve Bug: You might have to ask Mr. V that question – I only came up with the music. That obviously kinda set the tone for a rather old school house track though. So maybe that’s why he came up with these lyrics. I mean, I’ve lived through that era, I started deejaying in ´91. So I was there, right in the middle of it.

It was a great period, and we do see a lot of new music being released today, that sounds like tracks of the ’90s.

But as usual, I didn’t come up with this tune by sitting there thinking I have to write a piano house track that sounds like the 90s, it just turned out that way while playing around with several sounds, grooves and so on. But once I had the track, I knew it needed some vocals.

I’ve worked with Mr V. before, and I knew he could come up with something great, which he did. And I am especially happy about the fact that Cinthie did remix our tune, as I’m a big fan of her work. And the remix is just awesome.

f: Do you have a definite routine when working on a new musical arrangement, like meditating, burning incense, doing a few exercises, or preparing an unusual drink? 🙂

Steve Bug: Not at all. But most of the time I go to the studio after lunch and an espresso, so maybe that’s my routine.

f: Your music contains your ideas, thoughts and emotions from day to day life or is it the opposite? And music is the source of your inspiration and a  place where you can experiment with abstract concepts that can‘t be described in words, images or other forms of art?

Steve Bug: My emotions usually end up in my tracks. Sometimes making music can be a part of a healing process. I feel like I’m influenced by everything around me. Even more by emotions, in times when I’m less exposed to other music, especially club music. But altogether it’s rather difficult to put the process in words. In the end, it’s hard to say what happened when, and for what reason. But what I definitely know is that my music comes naturally pretty much all of the time. It just happens by playing around until I have something that clicks. And sometimes, when I don’t finish a track immediately I can’t go back at a later day, because I’m not even close to the mood I was in when I first started to put things together. Luckily that doesn’t happen too often.

f: What do you think are the main ingredients for a track or a set to keep people connected to the music while dancing?

Steve Bug: That may have also changed over the years since attention span has markedly decreased over the past 15-20 years, but for me, it is still a hypnotic element riding on a groove with little changes here and there. In deejay sets, I love when tracks are floating into each other and there are a few peaks now and then.

I think the true art of deejaying is to tell a story by mixing tracks from various genres.

It could include speed changes as well. I’m not a big fan of sets full of tracks that all kinda work the same way. Same beats, same breaks, same build-ups may work for some, if not many, but definitely not for me. I love being on the dance floor with my eye closed, enjoying a floating deejay set from deep house to Detroit techno.

f: What are your motivations to keep creating electronic music? And what is your perspective on the transition from an underground scene to a global phenomenon?

Steve Bug: I thought about that a lot recently since the money you make from releasing music is not even close to paying for what it takes to create the music. But money was never my motivation, and never will be.

I think I just deeply love making music, and I will probably never stop creating music, even if it’s just for myself.

But at the same time, I wonder, why should anyone continue to create music, when you’re not able to even pay the maintenance of a studio – digital, or even worse analog.

Music is in the hands of companies, some of whom don’t give a damn about music. All they care about is making money, getting a bigger cut from the market and from the artist share, and growing their business. All on the back of musicians who struggle to survive, sometimes having to work a normal job, just to be able to make music. Things need to change, and if all artists were on the same page, we could change something. But we need to do it together.

About the second question:

to see electronic music becoming a global phenomenon is a dream coming true, but as well a big nightmare.

Besides that, some of the superstar deejays are musically so far away from some more ‘underground’ deejays, that I can’t really see these styles under the same general banner of ‘electronic music’.

The question is, are these still the same thing, or are there already two completely different worlds? One for the masses, and one for the ones who seek something away from the masses? Just because both worlds are electronic music – and mostly 4/4 kick-based doesn’t mean it’s still the same thing. Okay, there is a lot in-between that does connect these two, but the two ends of the spectrum don’t really have a lot in common.

f: What is your favourite story about house music that people don‘t know?

Steve Bug: Every secret that is still a secret after over 35 years of house music, should stay a secret. 😉

Steve Bug – Back To ’95 EP is out now on AUS music! Grab your copy at Beatport.