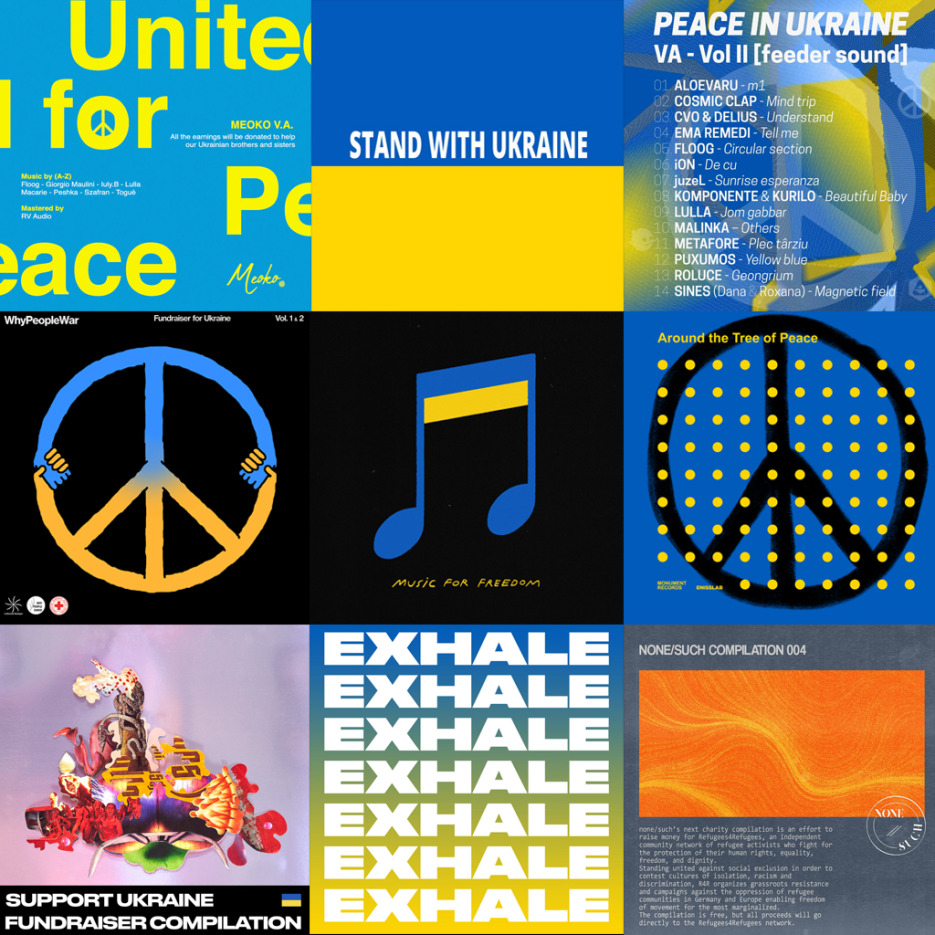 Since the war broke out lot of artists and labels concentrated their efforts in order to help out as much as they can. Here’s a LIST with 15 Various Artists compilations released in solidarity with Ukraine.

Music unites people, that’s for sure and here is a good example. DJs, producers, label owners, their friends, numerous volunteers and people from all over the world united for a peaceful cause. As the war in Ukraine becomes more and more disastrous and many people are forced to abandon their normal lifestyles and try to survive, several independent and official fundraising actions, have been put up online.

Below you’ll find a list of some amazing collaborations between talented artists, daring labels and strong organisations that are ready to directly help out through various methods. The music explores all the genres and styles, from house, techno and minimal to ambient, IDM and experimental sounds. You will also find a few bonus tracks and an inspiring EP at the end of the article. Dive deep and support any initiative, they’re all legit and standing by. Find out more here and here.

We call for PEACE! ☮

Berlin-based Deestricted decided to take an active position in support of Ukraine with a compilation released in a limited edition tape format, plus a digital download code and stickers included. The title is inspired by Etapp Kyle’s words about the meaning of the colours of the Ukrainian flag, where the blue represents the wide blue sky and the yellow the wheat fields symbolizing respectively the calm and the coy which characterize the country. All funds raised will be donated to: savelife.in.ua/en/donate.

Exhale Records – Together for Ukraine!

Amelie Lens’ Exhale Records has invited the label’s residents and a handful of techno’s most in-demand to come together and produce a VA compilation that includes 14 tracks to support ongoing humanitarian efforts in Ukraine. All proceeds from the compilation will be going directly to the Ministry Of Social Policy (UA), which is currently channelling raised funds to support citizens by providing food, shelter, medicine, financial aid and more. All donations go directly here: www.msp.gov.ua/en.

“As music is a universal language that connects cultures beyond borders and we are an independent platform focused on underground electronic music and arts, at this time we stand for peace, so we curated a special Various Artists compilation in order to raise money to help Ukrainian artists during these hard times.” Both volumes dive into carefully selected minimal, microhouse, deep techno and ambient, featuring artists like Maayan Nidam & Life on planets, Nils Weimann, Paul K, Unisson, Yaroslav Lenzyak, Aloevaru, Cosmic Clap, Ema Remedi and Puxumos, among many others. All revenues collected from the sales will be directed to Ukrainian artists in need.

Russian label Gost Zvuk presents a VA compilation with 32 tracks designed with eerie drones, serene ambient compositions and experimental sounds. “War is a crime against humanity. We stand with the people of Ukraine and demand an immediate end to war. We condemn the actions of the Russian government. 100% of all proceeds will be sent to humanitarian funds helping those in need.”

German venture Guerrilla Bizarre gathers 69 tracks signed by their favourite artists in the underground scene in a meaningful effort to help with the situation in Ukraine. Not bound by styles or genres, this megapack explores minimal techno, ambient, spacy house grooves, razor-edged breaks and much more. All funds raised will go entirely to the International Committee of the Red Cross, with weekly donations every Friday.

The idea of a VA compilation with some of Meoko‘s closest and favourites has been around for a couple of years, but it’s just with the current events that they finally decided to release it to help those who really need it right now. The material contains 8 tracks signed by Floog, Giorgio Maulini, Iuly.B, Lulla, Macarie, Peshka, Szafran and Togue. “Music is the only weapon against this cruel and unfair world.”

Monument Records – Around the Tree of Peace

As a sign of solidarity and an attempt to bring a shimmer of light into the current dark times, Monument has gathered a selection of 16 tracks for a VA compilation. All profits from the release will go to the Norwegian Refugee Council’s fundraising campaign for the people of Ukraine, who need help now. The diverse musical contributions were created by artists in over ten different countries, reflecting the uniting power music can have beyond borders. The release’s sound palette ranges from introspective ambient pieces to dark and broken beats as well as more hopeful timbres.

As a response to the situation in Ukraine, Muscut invited Ukrainian artists to join forces in raising funds to support those in need. 100% of the label sales are donated to the “Razom” initiative’s partners and their friends-volunteers who are fighting back the occupier in different cities. Find out more: linktr.ee/RazomForUkraine.

Music From Memory – Music For Freedom: A Fundraiser For Ukraine

Northern Electronics – A Dove Has Spread Her Wings: Relief for Ukraine

As a direct response to Russia’s invasion of Ukraine, Northern Electronics assembles a sonic charity collection in order to raise funds for UNICEF, helping the children and families who are suffering under the rage of their occupier. Expect a diverse sound that stretches across 34 tracks, from pure experimental music to IDM and techno.

none/such‘s next charity compilation is an effort to raise money for Refugees4Refugees, an independent community network of refugee activists who fight for the protection of human rights, equality, freedom and dignity. The VA features 26 tracks that deliver solid sounds from acid, techno or breakbeat, to IDM and trance.

Toy Tonics‘ bundle of 13 tracks gathers some of the label’s residents and friends in an effort to support the situation in Ukraine. All profit goes 100% to the Red Cross Ukraine emergency aid on a weekly basis. Find out more: www.drk.de/en/donate/donate-online.

Belgium-based venture United For Equity, or simply U4E, presents their Fundraiser Compilation in order to support Ukraine and help people in need. Expect some serious techno vibes. All funds gathered on Bandcamp will be donated to: https://savelife.in.ua.

Due to the current war in Ukraine, Undersound Recordings has decided to dispatch a compilation of 6 tracks previously released on the label. The VA includes works from Binaural, eoism, Jared Wilson, Wedding Acid Group, Sohrab and J. Mono. All the money raised will be donated to Red Cross Ukraine.

Over 100 artists from all over the world and various disciplines joined forces to raise funds for Red Cross Ukraine and help the innocent. After three days of no sleep, the Lithuanian record label whypeopledance is proud to present WhyPeopleWar Vol. 1 and Vol. 2 fundraisers. The albums feature 162 tracks in total, incorporating almost all styles and genres. All proceedings will be donated to Red Cross Ukraina: https://redcross.org.ua/en.

“War, what is it good for? Absolutely nothing! We have been stunned by the events in Ukraine and we want to help those affected by the conflict. Music can unite people behind a common cause and brilliant anti-war songs are wonderfully effective. We are making this available via our Bandcamp to raise money for the Disasters Emergency Committee’s Ukraine Appeal.”

For this cause, Enzo Siragusa collaborates with Fuse London and dispatches “Equinox”, a powerful sonic tool for the dancefloor. “We will be donating all the proceeds to the Disaster’s Emergency Committee in aid of the Ukraine crisis. We say no to War and our thoughts are with those currently affected by this horrific situation.”

Gene On Earth – A New Start

“In light of the invasion of Ukraine, I am releasing this track in order to donate 100% of the profits to the benefit of Ukrainian refugees. It’s the first track I have written in a full year due to an injury that kept me out of the studio since last March. If you have friends or family that would like to contribute, please feel free to share.”

“In light of the horrifying events in Ukraine, I’ve decided to put up an unreleased single with 100% of the profits going to Ukrainian charities. At this moment, it’s critical that we stand with our fellow humans who want nothing more than to live in a free and peaceful democratic society.”

In order to express their solidarity with Ukraine, here are 4 unreleased tracks signed by Cabaret Recordings‘ label head So Inagawa and Yuki Masda aka DJ Masda. All the profit from this release goes to humanitarian support for Ukraine.

Discover some of the latest releases by Ukrainian artists and extend your support for their amazing music. Feel free to drop us a message if you want to contribute to this list!